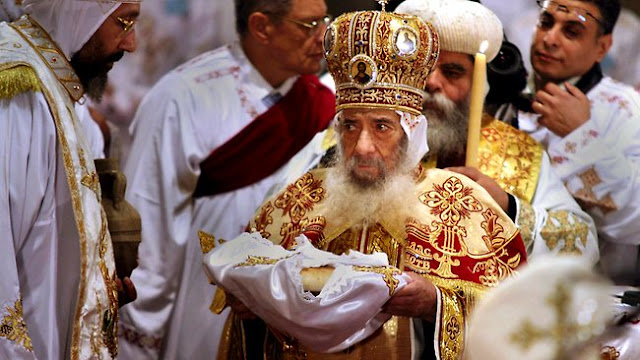 The trio died of suffocation inside the cathedral, church official Anba Younnes told The (London) Times.

CNN, citing Deputy Health Minister Hisham Sheeha, said overcrowding in the building resulted in a stampede, killing the three mourners and injuring 52 others. Most of the injured suffered from low blood pressure and insufficient oxygen.

Shenouda died Saturday at age 88 after a long illness, setting in motion the process to elect a new patriarch for the Middle East's largest Christian community, AFP reported.

He led the Copts, estimated at 10 percent of Egypt's population of more than 80 million, for a whole generation, during which the country was hit by a wave of Islamist militancy from which he sought to protect his flock.

Tens of thousands of mourners converged on the cathedral in a line that stretched for nearly a mile (1.6km), as military vehicles lined the road outside.

Shenouda's body, dressed in formal robes with a golden crown on his head, was placed upright on the tall ornate papal throne where it will remain sitting in state until the funeral Tuesday.

A bishop knelt to one side pressing his head to the throne, as thousands of worshippers in black hoping for a final blessing from their spiritual leader took pictures of Shenouda on their mobile phones, amid tears and wails of grief.

Copts nationwide mourned Shenouda, and one woman in the Suez Canal city of Ismailia, distraught by his passing, was hospitalized after trying to commit suicide, the official MENA news agency reported.

Based on wishes stated in his will, Shenouda will be buried at St. Bishoy monastery of Wadi Natrun in the Nile Delta, where he spent time in exile after a dispute with the late president Anwar Sadat, state media reported.

Bishop Pachomious of the Nile Delta province of Beheira has assumed papal duties for two months until a council of senior clergy meets to choose a new pope, state television said.

The new pope would be chosen according to procedures laid out in 1957 church bylaws.
Shenouda leaves behind a nervous community, a target of frequent sectarian attacks in recent years, with complaints of routine harassment and systematic discrimination and marginalization.

Egypt's Christians are particularly concerned over the rise and increased assertiveness of Islamists, following the uprising that toppled president Hosni Mubarak.