He was a man of courageous Christian faith in an age which needs many more.

After battling cancer for years, the beloved leader of the Coptic Orthodox Church, his Holiness Pope Shenouda III, succumbed to his illness. Despite having to balance fierce tensions between his people, especially the youth, the Muslim People, extremist groups, and the Egyptian government, Pope Shenouda was largely seen as charismatic and highly esteemed. He was a man of courageous Christian faith in an age which needs many more. 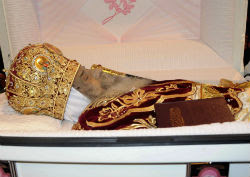 KNOXVILLE, TN (Catholic Online) - After battling cancer for years, on March 17, 2012, the leader of the Coptic Orthodox Church, his Holiness Pope Shenouda III, succumbed to his illness. He was 88 years old. According to one estimate, well over 100,000 mourners visited his body, which was seated on a ceremonial throne and dressed in gold and red vestments. A gold mitre was placed on his head and a gold-tipped staff placed in his hand. Pope Shenouda III led the Copts for the last 40 years of a 2000 year history that is both rich and tragic.

The Coptic Church is one of the oldest Christian churches in the world. They trace their origins back to the first century and Saint Mark, the writer of the Gospel of Mark, and the reign of the Roman emperor Nero. The Coptic Church has members in many countries throughout the world, though it is centered in Alexandria, Egypt. It is also the largest religious minority in the Middle East.

Many Copts converted to Islam after Muslim armies conquered Egypt in the seventh century because if they did not, they either had to pay excessively high taxes or they were killed. Many Copts were martyred as a result. Those who paid the tax, while they were allowed to remain Christian, lost many of their rights and were forced to live as second-class citizens. Life for the Copts improved somewhat in the 19th century, but it declined in the mid-twentieth century.

In was in this environment that Pope Shenouda served and rose in the ecclesial ranks. He was born Nazeer Gayed Roufail on August 3, 1923, in Assiut, Egypt. Nazeer became a monk at the age of 31. He was a member of the monastery of St. Anthony for six years, but he lived in a cave as a hermit, where he dedicated his time to meditation, prayer and asceticism.

He was later ordained into the diaconate in Christ and then the holy priesthood. In 1962 he was appointed to the bishopric of Christian Education and served as Dean of the Coptic Orthodox Theological Seminary, and he was given the name Shenouda, after the renowned Coptic scholar and writer Saint Shenouda the Archimandrite. Then, on November 14, 1971, he was elected as the 117th head, the Patriarch, the "father" of the Coptic Church.

Pope Shenouda authored many books and gave weekly lecturers. His themes often revolved around peace, dialogue, and forgiveness. He was also known as a staunch advocate of authentic ecumenism, that is, of restoring Christian unity. To this end, he met with Pope Paul VI in 1973 and signed the Joint Declaration of Faith. Then in 2000, he met with Blessed Pope John Paul II in Cairo, Egypt.

After Hosni Mubarak became president, he released Shenouda. Together they managed to walk a fine line. Under Mubarak, the Copts found greater, but tenuous, security. However, they remained second-class citizens. Since the fall of Mubarak a little over one year ago, violence against the Copts has risen. Furthermore, Muslim fundamentalists, the Muslim Brotherhood and Salafis, were the primary beneficiaries of Egypt's recent elections. This causes much concern among Coptic Christians.

Due largely to the discrimination against the Copts in Egypt, Pope Shenouda presided over an unprecedented worldwide expansion of the Coptic Orthodox Church. In 1971, there were apparently only a handful of Coptic parishes on the North American continent; today there are over 200 parishes in the United States and 23 in Canada. There are also parishes in Mexico, South America, and Australia.

Despite having to balance fierce tensions between his people, especially the youth, the Muslim People, extremist groups, and the Egyptian government, Pope Shenouda was largely seen as charismatic and highly esteemed. An article about Pope Shenouda in Wikipedia lists numerous accolades from people representing a broad array of social, political, and religious backgrounds. Some of them are as follows:

The Supreme Council of the Armed Forces of Egypt acknowledged Shenouda's wish of "preserving the unity of Egypt and the unity of its social fabric." In addition, Field Marshal Mohamed Hussein Tantawi, the Council leader, decreed three days of mourning for state employed Christians.

Mohamed Morsi, the party chairman for the Muslim Brotherhood's Freedom and Justice Party, referred to Shenouda's life as "a long journey of big contribution in various fields domestically and abroad."

Prime Minister Kamal el-Ganzouri said, "I give my sincere condolences to the Coptic brothers home and abroad. [He was a] national character and a symbol for patriotism and he gained wide respect and appreciation from the Egyptian people." ...