17 - BE RELEASED OF THE FEELING OF POSSESSION - By H.H. Pope Shenouda III 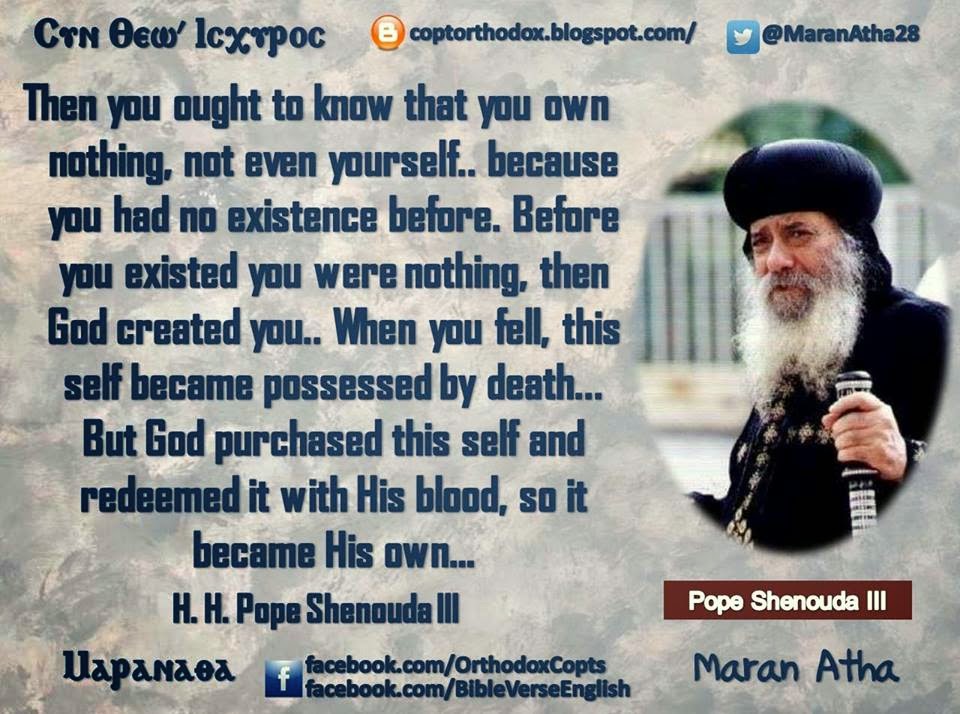 17 -  BE RELEASED OF THE FEELING OF POSSESSION
By H.H. Pope Shenouda III

17 -  BE RELEASED Of THE FEELING OF POSSESSION

Many people think themselves rich and think they possess many worldly things.. ..But as for you, my beloved brother, you were relieved of this feeling of possession since the time you realized that possession restricted your spirit.

Anything you had afterwards is only a gift given by God to you.. This was not a possession but a charge entrusted to your hand for a limited time ie. your lifetime.. When you pass away from earth, you will be as poor as you entered it.. naked as you were born.. As for the things which you thought you have possessed in this world and which you were forced to leave behind, someone else will claim a right to possess them and when he also passes away a third will claim the same right and so on...

Then you ought to know that you own nothing, not even yourself.. because you had no existence before. Before you existed you were nothing, then God created you.. When you fell, this self became possessed by death... But God purchased this self and redeemed it with His blood, so it became His own...

So, as you see you own nothing, not even yourself. Thus, a person who sins against himself is in fact committing sin against God Himself That is because he is corrupting a soul which is the ownership of God and corrupting a body which God-after taking possession of found pleasure in making it a temple for His Holy Spirit..

The same may be said of the person who sins against others.. It is a sin against God Himself whether directly or indirectly... David sinned against Uriah the Hittite and his wife Bathsheba but he addressed God saying "Against You, You only, have I sinned" (Ps. 51:4). He said so not only because he transgressed against God but also because he sinned against two persons belonging to God..

If you become aware of this, my beloved brother, you will recognize how dangerous is sins.. You do not possess your self so that you may dispose of it as an owner..

Regarding property, we have explained that we own nothing, but all we have is a gift from God.. You are just a person entrusted such property to manage it with honesty as a good steward. You will be asked about it when God says to you, "Give an account of your stewardship." (Luke 16:2)

Therefore we find a very rich king like David realizes the real state of matters and says, "I am poor and needy" (Ps. 70:4).. According to the wrong human measure David the King was not poor.. but in fact, according to a spiritual eye, he owned nothing..

Therefore also, the holy fathers vowed to live in voluntary poverty and considered this one of the main bases on which their monastic life depended.

This gives you the true meaning of doing charitable deeds.. You do not give out of your own property but you do give God's creation out of God's property.. If you know this, you will find no cause to feel self-righteousness or pride.. You will find no cause also to avoid the praise of others by praising yourself in a concealed way as by giving some money under the name of "a good doer".. Once I found a donor who wrote in place of his name "an evil doer who asks your prayers for him" I admired such a person..

The only One who can give of His own money to people is God..

So, I do not like to consider a charitable deed a virtue because it is not a favor done by the giver.. He is just a means to carry God's grace to others..

What is said about charity applies also to other good deeds which cannot be considered as a favor offered by anyone.

Another point attached to the charitable deeds is receiving thanks for them.. Let me ask you, my brother; 'how can you agree to let people thank you for something you have not given out of your own money. It is God's property, how can you receive thanks for it? How can you accept thanks? Give glory to God and hide yourself that God may appear who did all the work.

The feeling of possession restricts your spirit and makes you feel what you do not really have.. So, to escape from this feeling does not mean that you deny yourself but it means that you recognize the truth about yourself.. I pray that God may be with you...

Posted by Unknown at 3:55 PM No comments: 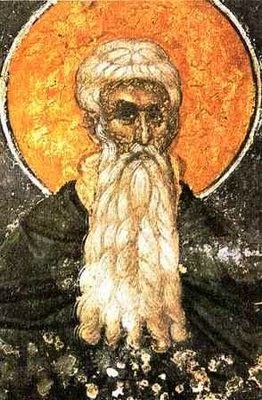 The brethren once asked Abba Arsenius, "What is the meaning of the words which one of the elders spoke, saying, 'He who dwells with men, because of the commotion of worldly affairs is unable to see his sins; but if he dwell in the silent repose of the desert he will be able to see God in a pure manner?'"

Abba Arsenius said, ‘The virtues which are cultivated in the world, and to which our Lord refers to in the Gospel , are, loving kindness, peace-making and other similar commandments, and it is quite possible for such virtues to be cultivated in the world by certain strenuous persons. But the purity of heart which sees God, and to which our Lord ascribed blessing, saying, 'Blessed are the pure in heart, for they shall see God,' cannot be acquired without dwelling in the desert and solitary and silent contemplation. The monk must acquire it in the following way.

Then through the tranquility of mind (which he will acquire) in silent contemplation, he will remember his sins, and when he learns to hate his passions, and has petitioned for the remission of his sins, and has suppressed his thoughts, and has become constant in pure prayer, and has cleansed his heart from abhorrent thoughts, then shall he be worthy to see in his heart, even as in a polished mirror, the light of the revelation of our Lord (shining) upon it, even as the Fathers say.

"Well, then, did that holy man say to those brethren, 'Visit the sick, reconcile the men of wrath,' for he who cultivates spiritual excellence in the world cannot, by reason of the commotion of the affairs thereof, see his sins; but if he continues in silent contemplation and prayer he shall see God."

From: The Paradise of The Holy Fathers, Vol. II

Posted by Unknown at 2:39 AM No comments: