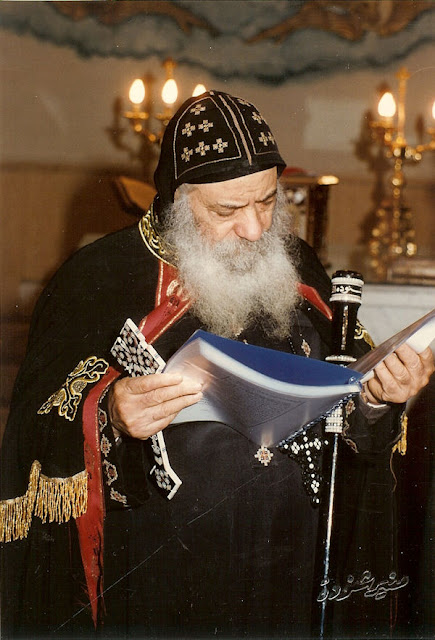 A statement has just been received from His Eminence Metropolitan Bishoy, General Secretary of the Holy Synod of the Coptic Orthodox Church, announcing the death of His Holiness Pope Shenouda on 17 March 2012

His Holiness Pope Shenouda III died at 5.15 p.m. He suffered a heart attack, but was pronounced dead on arrival at hospital. Copts all over the world are joining the mourning. Abba Seraphim, along with other Coptic clergy are on their way to Cairo to attend an urgent synod.

On Saturday evening, thousands of Copts gathered in the courtyard of Abbasiya Cathedral aiming to pay their last respects to the deceased patriarch. “We are not sure when this will be possible,” said one source. “Perhaps tomorrow.”

Another source indicated that no one would be admitted into the presence of the dead pope until the day of the funeral, “which will be held on Tuesday, three days from now, to make time for followers of the pope to come form across Egypt and from abroad.”

By Saturday evening, most presidential hopefuls, who had by and large made an effort to frequent Coptic mass since the end of the Mubarak regime, were offering their condolences.

“With one or two exceptions we expect all presidential hopefuls to be present in the funeral mass,” added the source, indicating that all state bodies, political parties and groups, including the Muslim Brotherhood, had already contacted the church. “Many have been asking how they might pay their respects and participate in the funeral mass.”

Meanwhile, official and church sources said a high level state representation is scheduled for the funeral mass. The head of the ruling Supreme Council of the Armed Forces (SCAF), Field Marshall Mohamed Hussein Tantawi, is expected to be at the cathedral to offer his condolences, while SCAF’s second in command, Sami Annan, is expected to be present throughout the mass.

Annan and several SCAF members were invited to attend Christmas Mass on 6 January despite the outrage of the Coptic public at the military’s conspicuous involvement in the tragedy that befell Coptic demonstrators on 9 October while they protested a series of attacks on Coptic churches across Egypt.

Diplomats and some foreign dignitaries are expected at the funeral which will probably take place at the Abbassiya Cathedral before the coffin is taken to the monastery in Wadi Al-Natroun for burial.

“We offer our deep condolences to every one of our Christian brothers for the loss of Pople Shenouda,” Muslim Brotherhood Supreme Guide Mohamed Badie said in a statement. “May God help all our Christian brothers overcome this ordeal and bring a successor who can keep promoting the sense of unity between all citizens,” he added.

An Egyptian army statement said that the Pope was a “rare statesman who worked with all of his energy to promote the wellbeing of the nation.”

Bishop Bakhomious (Pachomious) of Behera will head the Coptic Orthodox church for an interim period of two months. The General Congregation Council, which is part of the Coptic Orthodox Church of Alexandria, will nominate three bishops, one of which is to succeed Pope Shenouda III.

The names of the three bishops will be written on three papers, and a child will pick one, unseen, from a box. This method is used in order for the “will of God” to play a role in the process.