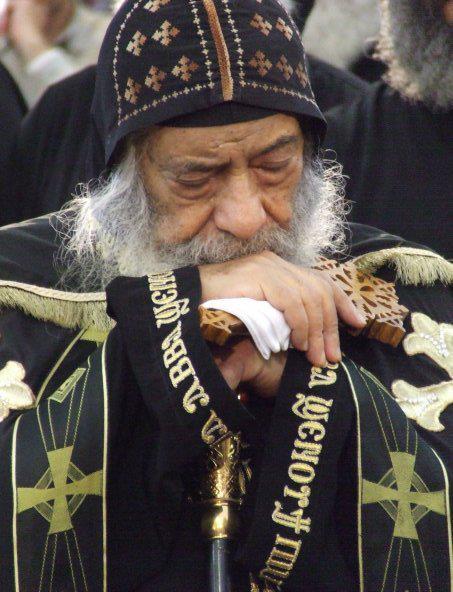 TEARFUL and wearing mourning black, tens of thousands of Egyptian Coptic Christians have joined a funeral Mass for their patriarch, Pope Shenouda III, at the main cathedral in Cairo.

Shenouda's body lay in a white casket in the elaborate regalia he traditionally wore to oversee services, complete with an ornate golden crown.

Many in the congregation broke down in tears, while others frantically waved goodbye as the Mass came to a close.

Clerics, deacons and laypeople gathered around the casket, kissing it, standing in silence or bowing in respect. Shenouda died on Saturday aged 88 after serving for 40 years at the helm of the Coptic Orthodox Church, one of the world's oldest Christian denominations. Most of Egypt's estimated 10 million Christians are Orthodox Copts.

A successor has yet to be named, and it could take months before the complex process is completed.

Egypt's Coptic Christians have long complained of discrimination by the nation's Muslim majority. The political ascent of Islamists since the ouster of longtime leader Hosni Mubarak a year ago has added to their worries.

Tens of thousands followed the Mass outside the cathedral, carrying portraits of Shenouda and crosses. Many wept, wiping tears from their faces as the melancholic tunes of the hymns reached them through loudspeakers.

Scores of military police were deployed to maintain security outside the cathedral. The normally congested traffic of central Cairo was backed up for hours because of the crowds. The cathedral is located on a main downtown artery.

"I know he is now in a better place, but it is difficult now he's gone. We miss you," said a grief-stricken Marianne Saad as she stood in the crowd outside the cathedral.

"After God, he was our only protector," lamented another young woman in the crowd. "We will miss him, but he will always be in our hearts," said a young Christian man, Hani Suleiman.

After the Mass, Shenouda's body was ferried to a military airport east of Cairo. From there it was flown to the Saint Bishoy monastery in the desert northwest of the capital, where he was to be buried later today.

Chaotic scenes erupted when a convoy of cars, including an ambulance carrying Shenouda's body, arrived at the monastery shortly before sunset. Military policemen struggled to control thousands of mourners who tried to push their way to the ambulance. Many in the crowd outside the monastery's walls tried to get inside when the convoy arrived but were kept out by the soldiers.

The monastery, which dates back to the 4th century, was a favourite of Shenouda's. He spent more than three years of exile there after he was banished in 1981 by Egypt's then-President Anwar Sadat, who claimed the patriarch was fomenting sectarian strife. Sadat's successor, Mubarak, released the Pope in 1985.