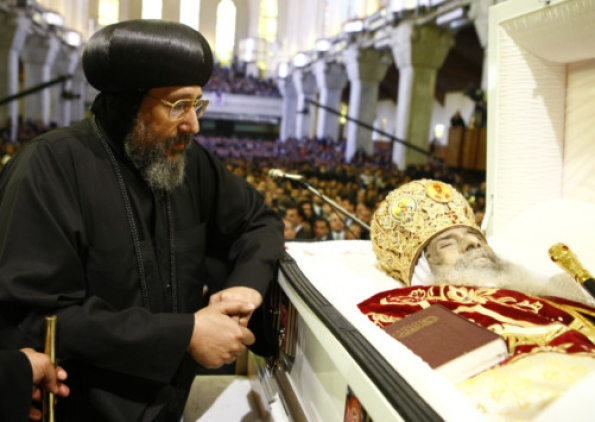 Shenouda, who died of prostate cancer on Saturday at the age of 88, was a controversial figure, facing an increasingly Islamist Egypt where Copts, a Christian sect which claims a direct link to Saint Mark the Evangelist, have come under attack in the majority Muslim nation.

Tensions have worsened since the overthrow of president Hosni Mubarak last year.

“I can’t tell you how much sorrow I have inside me. This was a great, great man and it will be hard to find anyone like him again,” said Ivon Mosaed, a 52-year-old Copt who heads a foreign language school.

Religious leaders from across the world, including a delegation from the Vatican, joined thousands of Copts in the Orthodox Cathedral of St Mark’s where bearded priests in black mitres prayed over the open coffin. A delegation from Egypt’s ruling military council and several candidates for upcoming presidential elections also attended.

Security was tight around the event, with police and army trucks outside and plainclothes police posted on bridges and in streets nearby.

Prayers, conducted in Egypt’s ancient liturgical Coptic language, were led by Bishop Bakhomious, head of a diocese in the Nile Delta, who will hold the post of pope for two months until a new leader is elected. Billionaire Copt Naguib Sawiris, a vocal critic of radical Islam, was also in attendance.

“I am so sad, of course, and many of my Muslim relatives are sad as well,” said Muslim student Iman, who was dressed in black and wearing a black veil as she stood outside the cathedral. “He was a decent Egyptian man who was known for being very wise.”

Shenouda’s body was driven away to a military air base and was due to be flown to the Wadi el-Natrun desert monastery north-west of Cairo, where he spent several years of prayer, contemplation and abstinence and had asked to be buried.

Egypt has seen less of the religious violence that has prompted members of ancient Christian communities to migrate from Iraq and other Arab countries. Syria also has a Christian minority which fears persecution if president Bashar al-Assad is toppled.

His task grew harder on New Year’s Day last year when 23 people were killed in a bomb attack on a church in Alexandria, blamed on Islamic militants based in Gaza. Many Copts accused the government of failing to protect them, a stance that sat uneasily with Shenouda’s support for Mubarak. Since Mubarak was ousted last February, sectarian clashes have continued. At least 25 people died in October when Christians clashed with military police in Cairo.

Shenouda’s successor will need to deal with a new political establishment dominated by the Muslim Brotherhood, a movement banned under Mubarak, which won recent elections. Egyptian media said board members of the church’s city councils would vote for three candidates to replace Shenouda. A child would then pick the new pope’s name from a hat.

Posted by Coptic Orthodox at 4:04 PM