ADIEU TO OUR BELOVED AND EVER LOVING PAPA SHENOUDA III 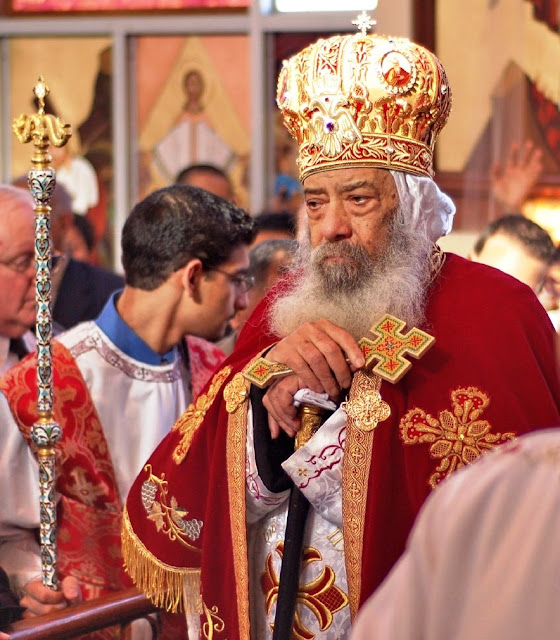 Pope Shenouda III, Egypt’s Coptic Orthodox Pope, has died on Saturday at the age of 88, after a long battle against illness.

The Coptic patriarch suffered from back and kidney problems for years and repeatedly travelled to the United States for medical treatment.

He was born on 3 August 1923 in Asiut, Upper Egypt and has been the Pope of Alexandria since November 1971 when president Anwar El-Sadat was in power.

“We lost today a great icon. His presence was crucial in repelling many threats against the country,” Amin Eskandar, a member in the People’s Assembly (parliament’s lower house), said in a phone call with state television channel Nile News.

“His patriotism and wise approaches to any issue were very helpful. May God compensate us for the loss of that great man.”

Shenouda was widely acclaimed by Christians and Muslims alike in recent years for his regular efforts to contain sectarian tensions following a number of incidents – some involving the burning of churches, but was also criticized for turning the church into a political entity.

He was also known for his support of Palestinian rights in the decades-long Middle East conflict. Because of these and other stances, he was often described as an Arab nationalist by many observers.

News of Shenuda’s death was certain to cause dismay among Egypt’s beleaguered Coptic population, many of whom looked up to him as a spiritual guide.

He was placed under house arrest by former president Anwar Sadat for his outspoken criticism of Sadat’s courting of Islamists.

But Shenouda was supportive of Sadat’s successor Hosni Mubarak, who was overthrown January 25 revolution in 2011, which led to an Islamist-dominated parliament — the first in the country’s history.

In 2001, he famously stated he would never visit Jerusalem unless he entered the country with a Palestinian visa along with Mohamed Sayed Tantawi, the late Grand Imam of Egypt’s foremost religious authority, Al-Azhar.

“I was full of admiration for the great patriotic stances he took throughout his life,” said Mohamed Refaa El-Tahtawy, the former spokesman of Al-Azhar.

“I remember his great remarks about the visit to Jerusalem, when he refused to go there under the Israeli occupation,” he added.

Posted by Coptic Orthodox at 11:40 AM