Body to remain on display until burial on Tuesday
By AFP 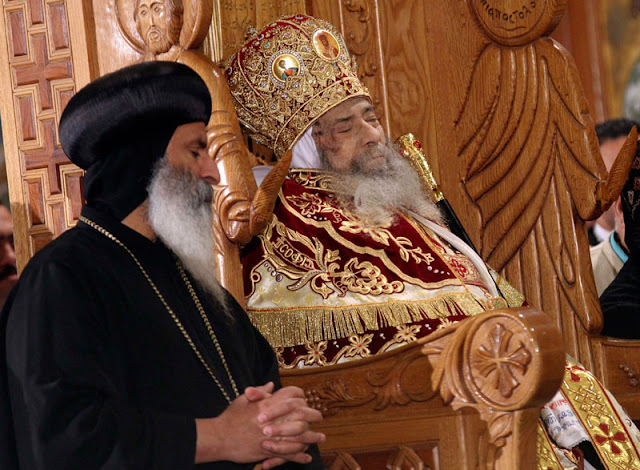 The body of Pope Shenouda III, the head of Egypt's Coptic Orthodox Church, is displayed for public viewing inside the Abassiya Cathedral in Cairo on Sunday March 18. (Reuters)


Egypt's Coptic Church began preparations on Sunday for the funeral of Pope Shenuda III and set in motion the process to elect a new patriarch for the Middle East's largest Christian community. Shenuda died on Saturday aged 88, following a long illness.

He led the Copts, estimated at 10 per cent of Egypt's population of more than 80 million, for the best part of a generation.

Shenuda's body, dressed in formal robes and a golden crown, was placed on the papal throne in Cairo's St. Mark's Cathedral where it will remain on display until his funeral on Tuesday.

In highly emotional scenes, thousands of worshippers hoping to get a final blessing from their spiritual leader, streamed into the cathedral, taking pictures of him on their mobile phones, amid tears and wailing.

Based on wishes stated in his will, Shenuda will be buried at St. Bishoy monastery of Wadi Natrun in the Nile Delta, where he spent his time in exile after a dispute with late president Anwar Sadat, state media reported.

Bishop Pachomious of the Nile Delta province of Beheira has taken over papal duties for two months until a council of senior clergy meets to choose a new pope, state television said.

The pope would be chosen according procedures laid out in 1957 church bylaws.

"Egypt Weeps," read the headline of the state-owned daily Al-Akhbar as others bid "Farewell, Pope Shenuda".

Coptic bishops from around the world have already started to fly in to attend meetings over funeral arrangements and plan for Shenuda's succession.

The spiritual leader of the Middle East's largest Christian minority had suffered health problems for years, travelling to the United States frequently for treatment.

Recently he stopped receiving treatment for liver failure and tumours or swelling in his lungs because he was too feeble, the Coptic Church said.

Condolences came in from around the world, with US President Barack Obama hailing Shenuda as an advocate for tolerance and religious dialogue.

Pope Benedict XVI, the head of the Roman Catholic Church, had offered prayers for Shenuda, the Vatican said.

Muslim leaders in the country were quick to send their condolences soon after news of his death broke.

Shenuda's death is "a grave calamity that has afflicted all Egypt and its noble people, Muslims and Christians," the country's mufti, Ali Gomaa, said in a statement.

Shenuda was placed under house arrest by former president Anwar Sadat for his outspoken criticism of Sadat.But he was supportive of Sadat's successor, Mubarak.

Posted by Coptic Orthodox at 4:22 PM