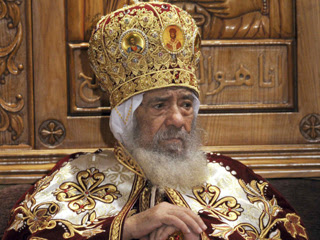 Pope Benedict XVI and other Catholic leaders have offered their condolences on the death of Pope Shenouda III, the head of Egypt's Coptic Orthodox Church, who died March 17 at age 88.

The Catholic Church, Pope Benedict said, “shares the grief that afflicts the Orthodox Copts,” and “stands in fervent prayer asking that he, who is the Resurrection and the Life, might welcome his faithful servant. May the God of all mercy receive Pope Shenouda in his joy, his peace and light.”

Born in August of 1923, Nazeer Gayed was honored as the 117th “Pope of Alexandria” by Coptic Orthodox Christians in Egypt and abroad. Although theological differences separated his church from Catholics and other Orthodox churches, Pope Shenouda himself was known as an ecumenical pioneer.

Pope Benedict showed the same ecumenical warmth, as he mourned Pope Shenouda's “departure to God, our common Father,” and offered his “most sincere brotherly compassion” to the Coptic synod of bishops as well as their priests and faithful.

Tens of thousands of Egyptians have come to Cairo's Cathedral of St. Mark to honor the late Pope of Alexandria and view his body, which was vested and placed on the episcopal throne he occupied for four decades. He will be buried at a northern Egyptian monastery following a March 20 funeral.

The loss of the Coptic Orthodox leader comes at a difficult time for Egyptian Christians, who make up about 10 percent of the population. Concerns about their future have intensified following the country's 2011 revolution, which was billed as non-sectarian but has led to the rise of Islamist political parties.

Latin Patriarch Fouad Twal, the head of the Roman Catholic Church in the Holy Land, mourned the loss of Pope Shenouda's leadership in his March 18 message.

The Coptic pope, he said, was “not only a religious leader for his church but also for all Christian churches,” particularly those of the Eastern traditions.

Patriarch Twal recalled how Pope Shenouda “continued his Christian mission in a firm confidence and a deep faith in the midst of a whirlwind of events that marked the Arab world.”

“We accompany with our prayers and send our condolences to his church and his beloved children, in recognition of all the great services to his church, his country and for all Christians in the Middle East. Grant him, O Lord, eternal rest, and may thy perpetual light shine on him.”