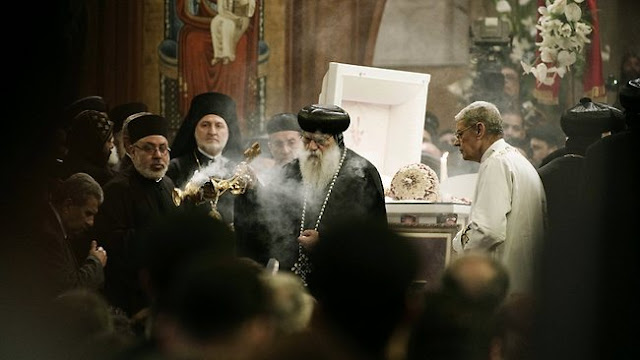 Funeral: Priests officiate at the funeral of Coptic Pope Shenuda III in St Mark's Coptic Cathedral in Cairo, as thousands of mourners paid their respects yesterday.


EGYPT'S Coptic Pope Shenuda has been buried in a desert monastery amid near-hysterical scenes.

Following a funeral service at Cairo's St Mark's Cathedral, Shenuda's body was flown some 100 kilometres by military aircraft to Beheira province in the northwest, where the motorcade took it to St Bishoy monastery in Wadi Natrun.

There, lines of military police at the entrance to the monastery crumbled under the force of thousands of screaming worshippers who rushed the convoy.

One woman hung precariously from the ambulance carrying the patriarch's body, as panicked officers shouted and tried to push back the heaving crowds.

His body was finally taken into the 4th century monastery where Shenuda had asked to be buried, a large cross of flowers placed over his marble resting place. Mourners clambered over each other to snatch flowers and kiss the tomb.

Shenuda died on Saturday aged 88 after a long illness, leaving behind a community increasingly anxious about the rise of Islamism and political uncertainty.

During the funeral service, Shenuda's body, dressed in robes and a gold crown, lay in an open coffin as patriarchs of Orthodox churches said prayers.

Pallbearers struggled to get the white coffin out of the vast cathedral in the capital.
They had to push through a sea of mourners who threw rose petals and waved white lilies amid near-hysterical scenes as people pressed forward to try to touch the coffin, causing it to tilt several times.

Coptic hymns and incense filled the church as clergy, officials and choirboys wept and waved goodbye to their spiritual leader, the head of the Middle East's largest Christian community.

Members of Egypt's ruling Supreme Council of the Armed Forces attended the service, as did parliament speaker Saad al-Katatni, a member of the Muslim Brotherhood, and several Egyptian ministers, MPs and other public figures, both Christian and Muslim.

Crowds waited, some all night, for a chance to attend the service, which officials had said would be by invitation only. Those who could not get in massed outside to pay their respects.
At one point, the gate to the cathedral compound was opened, causing a stampede into the courtyard before church officials scrambled to close it again.

Prayers were led by the patriarch of the Ethiopian Orthodox Church, Abune Paulos.
"Because he is resting does not mean we have lost him," Abune Paulos said at the emotional service, aired live on television.

Yesterday had been declared a day of national mourning in Egypt. Flags nationwide were flown at half mast, and an unprecedented security plan was put in place in Cairo and in the Nile Delta province of Beheira.

Shenuda's death brought tens of thousands of Copts to the cathedral to bid a final farewell.
Ahead of the funeral, the pope's body, dressed in gold, white and crimson robes, a gilded crown on his head, was placed seated on the ornate papal throne, a carved image of Christ behind him and lions standing guard on either side.

Devastated worshippers thronged to catch a final glimpse of "Baba Shenuda," using mobile phones to take pictures of him.

Three mourners were crushed to death in the crowd on Sunday, and 137 people were injured, prompting church officials to cut short the viewing and close the cathedral to the public.
Shenuda's death set in motion the process to elect a new patriarch, who will lead the community through a critical phase marked by political instability and sectarian tensions.

The new pope will be chosen by a council made up of senior clergy, current and former Coptic public officials, MPs, local councillors and journalists, in a process that could take months.

News of Shenuda's death caused dismay among Egypt's beleaguered Coptic population, many of whom credited him with maintaining a cool head during challenging times and helping to prevent widespread sectarian unrest.

But his critics saw him as being too close to the government, refusing to speak up for the community in the face of sectarian attacks, discrimination and harassment.

Named pope of Alexandria in 1971, Shenuda led the Copts, estimated at 10 per cent of Egypt's population of 80 million, for a generation. During that time, Egypt was hit by a wave of Islamist militancy from which he sought to protect his people.

Copts have been particularly concerned about the political fallout from the Arab spring uprising that ousted veteran president Hosni Mubarak in February last year.

Islamist parties, including ultra-conservative Salafists who believe Christians should not have a say in ruling the country, won almost three-quarters of the seats in the first parliamentary elections since the revolt.