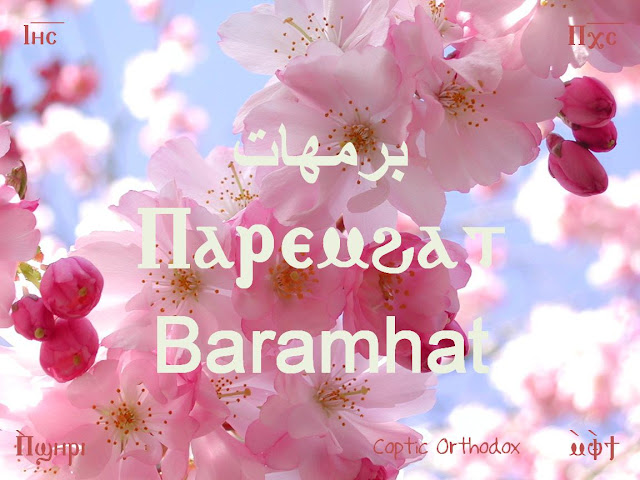 
The Departure Of The Saint Anba Khail (Mikhail) The Forty Six Pope Of The See Of St. Mark

On this day of the year 483 A.M. (March 12th, 767 A.D.) the holy father Anba Khail (Mikhail), the forty six Pope of the See Of St. Mark, departed. This father was a monk in the monastery of St. Macarius and he was knowledgeable and ascetic. When Pope Theodorus the forty fifth Patriarch, his predecessor, departed the bishops of Lower Egypt (Delta) and the priests of Alexandria gathered in the church of Anba Shenouda in Cairo.

A Dispute arose among them about who was fit, and finally they called Anba Mousa, Bishop of Ouseem, and Anba Petros, Bishop of Mariout. When they arrived, Anba Mousa found the priests of Alexandria obstinate, he rebuked them for that, and dismissed them that night so their minds and souls might calm down. When they met the next day he mentioned to them the name of the priest Khail the monk in the monastery of St. Macarius. They unanimously agreed to his choice and obtained a decree from the Governor of Egypt to the elders of the wilderness of Sheahat (Wadi El-Natroun) to bring him from the monastery. On their way, when they arrived to Geza they found father Khail coming along with some elders to fulfill a certain task connected with the monastery. They seized him, bound him, and took him to Alexandria where they ordained him Patriarch on the 17th day of Tute, year 460 A.M. (September 14th., year 743 A.D.).

It Happened that there was a drought in the city of Alexandria for two years, and on that day the rain fell heavily for three days and the people of Alexandria considered that a good omen.

During the reign of Marawan the last of the Khalifas of the Umayyad rule and during the governorship of Hefs Ebn El-Walid and during the days of this father many great tribulations fell upon the believers.

A large number of the believers fled from Egypt and the number of those who denied Christ was twenty-four thousand, and because of that the Patriarch was in great sorrow until God perished those were responsible for that. This father endured many difficulties from Abdel Malek Ebn-Marawan the new governor. He imprisoned, beaten, chained, and tortured him with many other ways of painful tortures, then he released him. The Patriarch went to Upper Egypt to collect alms and when he came back, the Governor took the money from him and threw him back in prison.

When Keriakos king of Nuba knew that, he was extremely enraged, he prepared one hundred thousand soldiers and marched down to Egypt. Going threw Upper Egypt he slew all the Muslims that he met, until he reached El Fostat (Cairo), he camped around the city threatening to destroy it. When Abdel Malek the Governor saw the army surrounding the city and that all this had taken place for the sake of the Patriarch, he became terrified, so he released him from prison with great honor. The Governor entreated the Patriarch to mediate peace between him and the king of Nuba. The Patriarch agreed to his request, so he went with some of the clergy to meet the king and asked him to accept the peace from abdel Malek which the king accepted and returned back.

This father debated with Cosmas the Melchite Patriarch concerning the Hypostatic Union. Pope Khail wrote him a letter, signed it along with his bishops, which said in it: "It is not right to say that in Christ two distinct Natures or two distinct Persons after the Hypostatic Union." Cosmas was convinced with that and asked to become a bishop under the authority of Anba Khail. When Anba Khail completed his strife, he departed to the Lord whom he loved after he had spent on the Chair of St. Mark twenty-three and half years.

May his prayers be with us and Glory be to God forever. Amen. 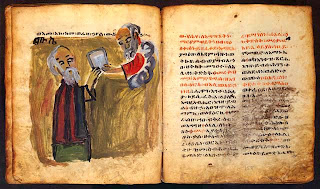 IN THE NAME OF THE FATHER AND THE SON AND THE HOLY SPIRIT,ONE GOD. AMEN.

Baramhat - also known as Baramhat, is the seventh month of the Coptic calendar. It lies between March 10 and April 8 of the Gregorian calendar. The Coptic name Paremhat comes from the Egyptian name of the month, pa-en-Amenhotep, "month of Amenhotep I", who was deified in the polytheistic Ancient Egyptian religion following his reign (ca. 1500 BC) – the month formerly known as Rekeh-nedjes being renamed in his honor.

Paremhat is also the third month of the Season of Proyet (Growth and Emergence) in Ancient Egypt, where the Nile floods recede and the crops start to grow throughout the land of Egypt.

In the Ethiopian calendar, the corresponding month is called Megabit

Posted by Coptic Orthodox at 11:33 AM