CAIRO, Egypt — Pope Shenouda III, the patriarch of the Coptic Orthodox Church who led Egypt’s Christian minority for 40 years during a time of increasing tensions with Muslims, died Saturday. He was 88.

His death comes as the country’s estimated 10 million Christians are feeling more vulnerable than ever amid the rise of Islamic movements to political power after the toppling a year ago of President Hosni Mubarak. The months since have seen a string of attacks on the community, heightened anti-Christian rhetoric by ultraconservatives known as Salafis and fears that coming goverments will try to impose strict versions of Islamic law. 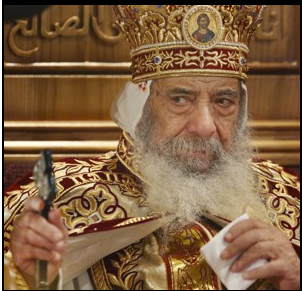 Tens of thousands of Christians packed into the main Coptic cathedral in Cairo on Saturday evening hoping to see his body. Women in black wept and screamed. Some, unable to get into the overcrowded building, massed outside, raising their hands in prayer.

“He left us in a very hard time. Look at the country and what’s happening now,” said Mahrous Munis, a Christian IT worker in his 30s who was among the crowds. “Copts are in a worse situation than before. God be with us.”

Munis’ friend, Sherif Sabry, interrupted. “He was our rock. God help us find someone who can fill his place.”

An archbishop later announced to the crowd that the funeral would be held in three days, and in the meantime Shenouda’s body would be put on display in the cathedral, sitting in the Mar Morqos — or St. Mark — throne from which the pope in his elaborate regalia traditionally oversaw services.

Shenouda died in his residence at the cathedral, and the state news agency MENA said he had been battling liver and lung problems for several years. Yasser Ghobrial, a physician who treated Shenouda at a Cairo hospital in 2007, said he suffered from prostate cancer that spread to his colon and lungs.

U.S. President Barack Obama paid tribute to Shenouda as “an advocate for tolerance and religious dialogue.”

“We will remember Pope Shenouda III as a man of deep faith, a leader of a great faith, and an advocate for unity and reconciliation,” Obama said in a statement issued by the White House. “His commitment to Egypt’s national unity is also a testament to what can be accomplished when people of all religions and creeds work together.”

“Baba Shenouda,” as he was known to his followers, headed one of the most ancient churches in the world. The Coptic Church traces its founding to St. Mark, who is said to have brought Christianity to Egypt in the 1st Century.

For Egypt’s Christians, he was a charismatic leader, known for his sense of humor — his smiling portrait was hung in many Coptic homes and shops — and a deeply conservative religious thinker who resisted calls by liberals for reform.

Above all, many Copts saw him as the guardian of their community living amid a Muslim majority in this country of more than 80 million people. Christians have long complained of being treated as second-class citizens, saying they face discrimination and that police generally fail to prosecute those behind anti-Christian attacks.