As once again, the date for Holy Pascha was common to both East and West, there was a great sense of oneness among Christians in celebrating the Lord’s Resurrection. British Orthodox congregations observed the Holy Week services whilst at Charlton, Father Sergius Scott joined in an Ecumenical Procession of Witness on Good Friday. In all our churches the Paschal Vigil and Liturgy was celebrated on Pascha Eve (23 April), which also coincided with the traditional observance of St. George’s Day in England. The exceptionally fine weather and the fact that so many trees, shrubs and flowers had burst into bloom, added to the sense of the glory of the new life revealed in the Resurrection of our Lord Jesus Christ.

Because of its elderly congregation and the church being isolated in the countryside, St, Mary & St. Felix at Babingley in Norfolk began the Vigil service just before sunset. Abba Seraphim presided and was the first to proclaim, “Christ is Risen”. As there were a good number of Orthodox Christians from Moldova and Russia joining the regular congregation, they were also greeted in Russian. At the conclusion of the Liturgy when Abba Seraphim blessed and distributed dyed eggs, he also blessed their traditional festive foods of pascha and kullich, which they had brought to the church. Father Simon reports that the Bournemouth and Portsmouth congregations celebrated Holy Week and the feast at the Church of Christ the Saviour at Winton (Bournemnouth) and services were well supported. Following the Vigil and Liturgy on Pascha Eve, on the forenoon of Pascha, prayers for the departed were said at church and in a long-established local tradition their graves at Wimborne Road Cemetery were visited and the Resurrection hymn sung as eggs were placed on their graves. At Cusworth the local congregation were also joined by Orthodox Christians from Eastern Europe and the church was filled, whilst at Chatham a new catechumen was received during the evening and the joyous celebration concluded with an extensive buffet which continued into the early hours.

At the conclusion of the service at Babingley Abba Seraphim read the Paschal message from His Holiness Pope Shenouda III and all churches prayed with great fervour for Pope Shenouda and also Patriarch Mor Ignatius Zakka of Antioch, having a great burden of concern for their brothers and sisters in Egypt and Syria who are caught up in the civil disturbances in both countries.

Abba Seraphim returned to London at noon on Holy Pascha and went first to greet Father Michael Robson at Morden College, Blackheath, before visiting sick and housebound members of the church with Holy Communion.

Posted by Coptic Orthodox at 4:03 AM No comments:

Pope of Alexandria & Patriarch of the See of St. Mark

My beloved children in the lands of immigration, both clergy and laity.

I congratulate you for the Glorious Feast of the Resurrection, wishing you all that the Lord returns it upon you with all goodness and blessing.

The resurrection of the Lord Christ was distinguished with an amazing power. He is the only One who was victorious over death by Himself. In His resurrection, He crushed death, and arose with the power of His Divinity. Also, by His power, He came out of the closed tomb which had a great stone upon it, without anyone seeing Him. Also with the same power, He entered the upper room where the disciples were, while its doors were shut. After He spent forty days with them speaking to them about matters pertaining to the Kingdom of God, He ascended to the heavens with a great power, which is against all the laws of gravitational force. Of course, it is the power of His Divinity.

Therefore, St. Paul the Apostle said about Him, in the Epistle to the Philippians 3:10 “that I may know Him and the power of His resurrection, and the fellowship of His sufferings...” This is why we also praised Him throughout the Holy Week, confessing His power and saying to Him: “To You is the power ... Thok te tee gom.”

Our Lord Jesus Christ, who arose with power, and ascended with power, also grants us power. The Church started its history with power, when the Holy Spirit descended upon the pure disciples. The Bible says: “And with great power the apostles gave witness to the resurrection of the Lord Jesus. And great grace was upon them all.”

This power remained in the life of the Church. With great power, St. George was able to tear the decree of the emperor. Even all the martyrs received death with power, and they did not fear it. Instead, they reiterated the expression “...having a desire to depart and be with Christ, which is far better.” (Philippians 1:23)

Therefore, my beloved children and brethren, always be powerful. I mean, that you have spiritual power by which you defeat Satan, all the power of the enemy, all the wars of the ego, and all evil desires.

And in your victory, do not attribute this to your own personal power, but to the power of God which works in you, now and always.

Lastly, be well and absolved from the Holy Spirit; and pray for me.

At the conclusion of the service at Babingley Abba Seraphim read the Paschal message from His Holiness Pope Shenouda III and all churches prayed with great fervour for Pope Shenouda and also Patriarch Mor Ignatius Zakka of Antioch, having a great burden of concern for their brothers and sisters in Egypt and Syria who are caught up in the civil disturbances in both countries.
http://youtu.be/xZ7YtAShGwc

Posted by Coptic Orthodox at 2:56 AM No comments:

An Act of Christ's Love and Care

Posted by Coptic Orthodox at 2:24 AM No comments: 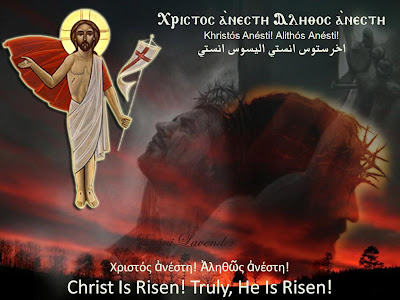 Christ Is Risen! Truly, He Is Risen!