JONAH IN THE BELLY OF THE FISH - By H.H. Pope Shenouda III 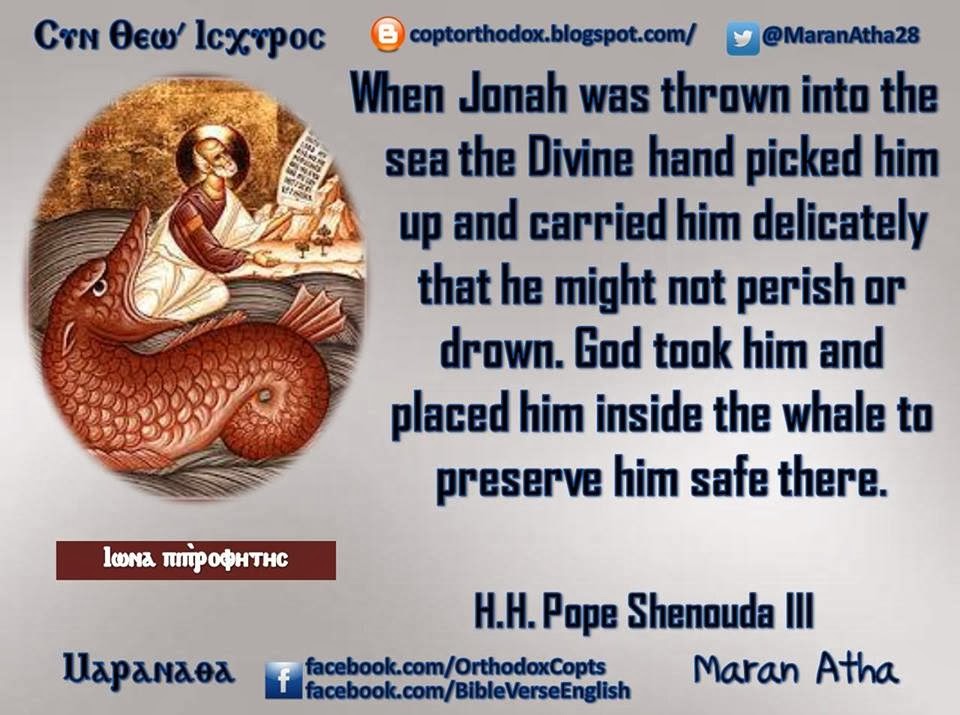 Jonah was thrown into the sea, yet he was not thrown unto death. God's Providence still held him, and God was still with His plan of sending him to the city of Nineveh for the sake of its salvation.

Is this man, O Lord, still suitable for this great ministry, after all that he has done?

Yes. This Jonah is My son, and My beloved. He is also My prophet, and I will send him to Nineveh. If he sinned I will correct him and make him useful for My ministry. I will save his soul and save the city through him. This unpolished stone, I undertake to chisel until I make it suitable for building.

Indeed, God is wondrous in His long-suffering. He does not hastily abandon or become angry with His servants who fall.

He received Peter after he had denied Him, and confirmed him in his apostleship. We human beings are characterised by our quick temper, and by our being quick to punish and quick in cut our relationships. Whereas God is not like that. He kept Jonah in his ministry and preserved him safe and sound to accomplish his mission. When Jonah was thrown into the sea, the God of the sea received him to protect him from every evil.

When Jonah was thrown into the sea the Divine hand picked him up and carried him delicately that he might not perish or drown. God took him and placed him inside the whale to preserve him safe there.

God had “prepared a great fish to swallow Jonah" (Jon. 1:17). He did not prepare it to destroy him but to preserve him. The great fish was not a punishment but a shelter. Jonah was safer and more comfortable in the belly of the whale than if he were still in the ship struggling against the waves and the sea, and against fatigue, cold and wind.

This whale was sent by God to carry out the Divine will entrusted to it.

It did not have authority to eat Jonah nor to secrete digestive enzymes onto him to absorb him. No, but rather it swallowed him in order to take him into its inner bosom and keep him safe there until he would approach his destination. The whale was a free means of transport by which Jonah reached the nearest point to his embarkation stop.

It was as though Jonah was in a protected submarine sailing underwater. That great fish was sent to rescue him from the sea and its tumults. It was like tribulations, appearing fearful from the outside whilst entailing within them all benefit. Jonah was inside the fish for three days, sound and not conquered by the whale, just as Christ was in the tomb for three days and was not conquered by death.

So should you be, blessed brother. If the Lord prepares for you a great fish to swallow you, do not fear, neither be troubled, nor grieve. From inside the belly of the fish bless the Lord as Jonah did.

Be assured that the whale can swallow you but it cannot harm you. It can never touch you without God's sanction. The time will surely come when the Lord will order it to disgorge you onto dry land where you where before. Is God not the Creator of the whale, and are not its life and direction in His hand? If you are in tribulation, brother, then remember Jonah's whale and you will be reassured. You will know that the Lord is the one who has prepared this whale for you to grant you a particular virtue or a special grace. 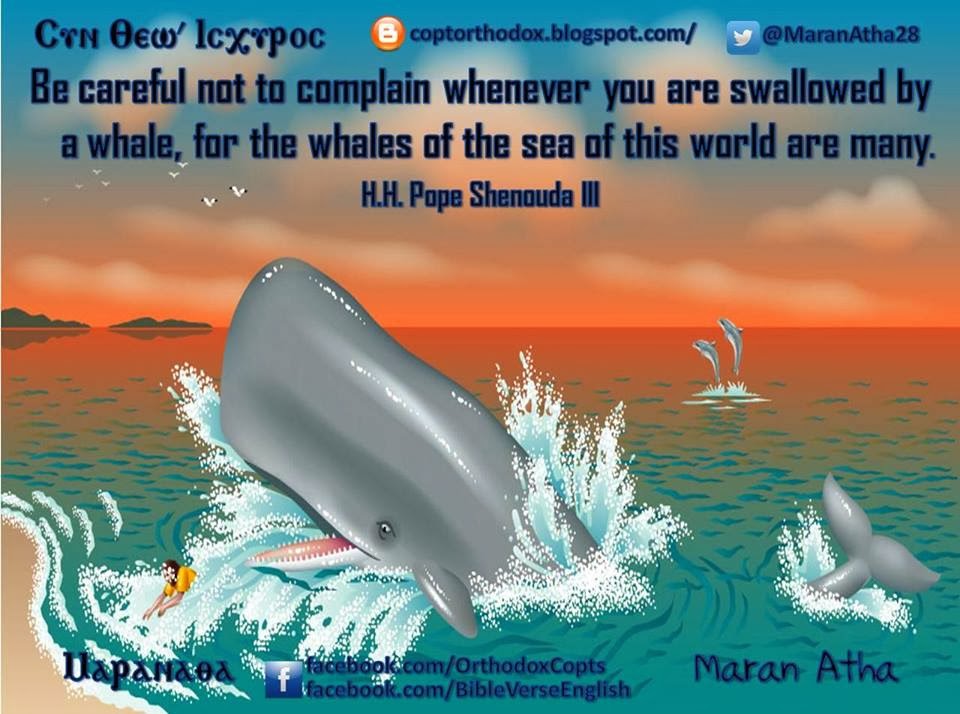 Be careful not to complain whenever you are swallowed by a whale, for the whales of the sea of this world are many.

Do not say: "Why do You treat me like this, O Lord? Why did You prepare this whale to swallow me? Where were You, O Lord, when it was swallowing me? And why did You not rescue me?"

Know that God's answer is one: "Do not be afraid. It is enough for you that you are with Me. Even if you are in the belly of the whale, I am with you. I will not disregard you nor abandon you." Therefore, my brother, do not be afraid. Remember the saying of the righteous Abba Paul, "He who flees from tribulation has fled from God".


That whale was extremely huge. It was "a great fish."

There are many huge whales, each one of them like a spacious room, able to swallow a boat together with those in it. When the great fish swallowed Jonah, Jonah looked and found himself as if in a large hall or in a pool. What did he do? He returned to his senses, knelt down and prayed in the belly of the whale, and the Lord beheld him and rejoiced:

Ah Jonah! I have wanted this prayer from you since the beginning of the story. The reason for all that has happened was to make you kneel down, even if in the belly of the fish, that we may reason together.

"For a long time I have wanted to talk to you and reason together, but you were angry, you fled and refused to talk. But now is an appropriate opportunity to reconcile together.

I was greatly affected by Jonah's prayer in the belly of the great fish, which is characterised by the spirit of prophecy, wondrous faith and assurance of the unseen.

It is one of the greatest prayers I have ever read in my life. If only he had offered it, or a prayer of its like, before he had thought of fleeing from the Lord! Indeed tribulation is a school of prayer.

I was deeply affected by his saying: "I cried out to the Lord because of my affliction and He answered me", and I said in myself, "What is all this, Jonah? How has God answered you when you are still in the belly of the great fish? Would it not be more appropriate to say, 'I cried out to You, O Lord, answer me', so that you plead for your prayer to be answered rather than declaring it?"

Jonah saw with the eye of faith what the Lord would give him. He saw it as if it were before his eyes, and not as if he would obtain it later on, thus he said joyfully: "I cried out to the Lord.. and He answered me".

Jonah continued his wondrous prayer, saying to the Lord: "Out of the belly, of Sheol I cried, and You heard my voice... all Your billows its and Your waves passed over me... Yet I will look again toward Your Holy temple". With this faith Jonah could see himself outside the great fish, looking toward the temple of the Lord.

With this faith he was able to turn his prayer from petition into thanksgiving whilst he was still in the belly of the great fish, and thus he concluded his prayer by saying: "But I will sacrifice to You with the voice of thanksgiving; I will pay what I have vowed. Salvation is of the Lord." (Jon. 2:9)

What made you sure, O holy prophet, that the Lord heard your prayer and answered you, sanctioned that you come out of the whale and return once more to behold His temple? How far was that temple from you? It was far away in Jerusalem whilst you were in the belly of the whale, somewhere in the sea, exactly where you could not ascertain. But the prophet replies:

"I am completely confident that I will come out of the belly of the whale and accomplish my mission, because God's word is never disproved nor does it return empty.”

"So long as God commanded that I should go to Nineveh, then I will go there and carry out His sacred will, undertake my preaching ministry and then return to the temple of God to worship there. I will sacrifice to the Lord and offer my vows. All this I see clearly and without doubt before my eyes. My present temporary state in the whale and the sea has no effect on this at all."

How amazing is this man in his faith! Indeed, he is the man of deep faith chosen by the Lord. We do not deny that a cloud engulfed him and he sinned against God, but his essence was still good.

He saw the future full of hope as though it were the present. He offered thanksgiving to the Lord for the salvation which he had not yet received according to time, but which he had actually received according to the gift of revelation granted to prophets; the revelation of the man who has eyes open to see the Lord's visions as in an open book, and who enjoys God's promises before they are fulfilled.

When Jonah's faith reached that wonderful level, the Lord ordered the whale to vomit him onto dry land.

That whale acted with great discipline according to an assuring predestined Divine plan. It appeared in the proper time and at the right place in order to carry Jonah in its belly. It was as though this prophet was being taken from an open ship liable to being covered and drowned by the waves, into an enclosed and protected ship invulnerable to water and waves. In due time the whale vomited Jonah onto dry land at the place which God defined. There it left him unharmed after it had fully completed its errand.

Congratulations, Jonah, on this wonderful submarine in whose bosom you lived for a while. It has brought to your mission.

Let us turn over this page in the life of Jonah as if it had never happened. As if the first two chapters of the Book have been forgotten by the Lord. O the Lord returned and said to Jonah anew: "Arise, go to Nineveh, that great city, and preach the message that I tell you.”

Contemplations on the Book of Jonah the Prophet
By H.H. Pope Shenouda III