5 - HUMILITY IN THE DISCIPLES OF JESUS 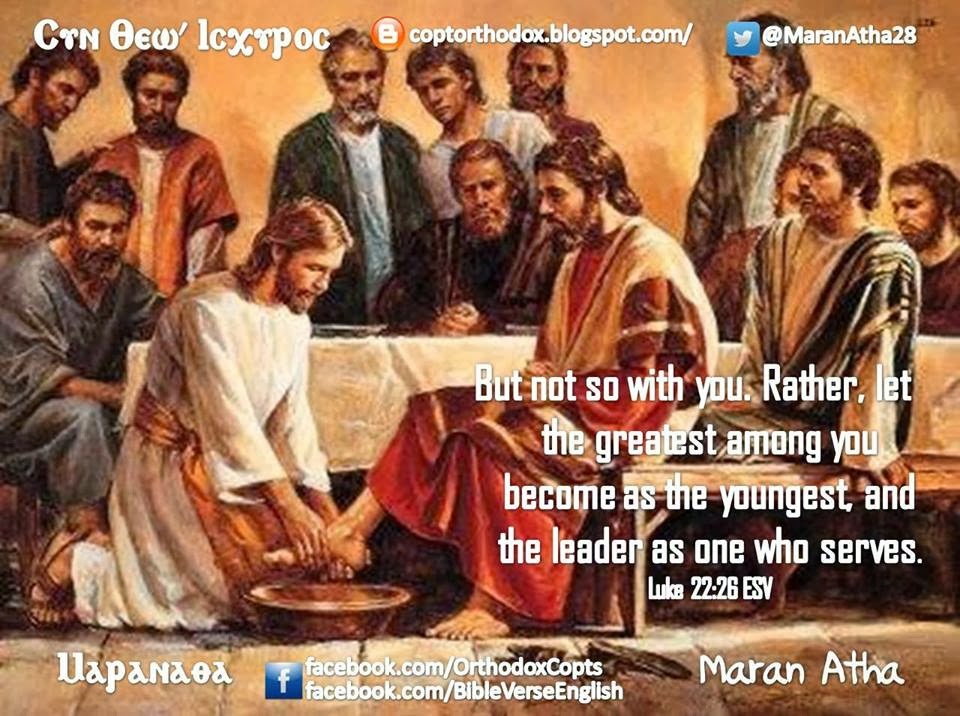 But not so with you. Rather, let the greatest
among you become as the youngest,
and the leader as one who serves.
Luke 22:26


We have studied humility in the person and teaching of Jesus. Let us now look for it in the circle of His chosen companions, the twelve apostles. If, in the lack of it we find in them, the contrast between Christ and men is brought out more clearly, it will help us to appreciate the mighty change which Pentecost wrought in them. It will prove how real our participation can be in the perfect triumph of Christ's humility over the pride Satan had breathed into man.

In the Scriptures quoted from the teaching of Jesus, we have already seen what the occasions were on which the disciples had proved how entirely lacking they were in the grace of humility. Once, they had been disputing about which of them should be the greatest.  Another time, the sons of Zebedee with their mother had asked for the first places -- the seat on the right hand and the left. And, later on, at the table of the Last Supper, there was again a contention over who should be accounted the greatest.

Not that there were not moments when they indeed humbled themselves before their Lord. So it was with Peter when he cried out, "Depart from me, for I am a sinful man, O Lord!"  (Luke 5:8)  The disciples also fell down and worshipped Him who had stilled the storm. (Matt. 14:22-33)  But such occasional expressions of humility only bring out into stronger contrast the habitual state of their mind.  This state was shown in the natural and spontaneous revelation given at other times of the place and the power of self. As we study the meaning of all this will, we will learn several important lessons.

First, How much there may be of earnest and active religion while humility is still sadly lacking. See it in the disciples. There was in them fervent attachment to Jesus. They had forsaken all for Him. The Father had revealed to them that He was the Christ of God. They believed in Him, they loved Him, they obeyed His commandments. They had forsaken all to follow Him. When others went back, they clave to Him. They were ready to die with Him. But deeper down than all this there was a dark power, of the existence and the hideousness of which they were hardly conscious, which had to be slain and cast out, before they could be the witnesses of the power of Jesus to save.

It is even so still. We may find professors and ministers, evangelists and workers, missionaries and teachers, in whom the gifts of the Spirit are many and manifest, and who are the channels of blessing to multitudes, but of whom, when the testing time comes, or closer intercourse gives fuller knowledge, it is only too painfully manifest that the grace of humility, as an abiding characteristic, is scarce to be seen. All tends to confirm the lesson that humility is one of the chief and the highest graces; one of the most difficult of attainment; one to which our first and greatest efforts ought to be directed; one that only comes in power, when the fullness of the Spirit makes us partakers of the indwelling Christ, and He lives within us.

Second, How impotent all external teaching and all personal effort is, to conquer pride or give the meek and lowly heart. For three years the disciples had been in the training school of Jesus. He had told them what the chief lesson was He wished to teach them: "Learn of Me, for I am meek and lowly in heart."  (Matt. 11:29)

Time after time He had spoken to them, to the Pharisees, to the multitude, of humility as the only path to the glory of God. He had not only lived before them as the Lamb of God in His divine humility, He had more than once unfolded to them the inmost secret of His life: "The Son of Man came not to be served, but to serve"; (Mark 10:45);  "I am among you as one that serves."
(Luke 22:27)

He had washed their feet, and told them they were to follow His example. And yet all had availed but little. At the Holy Supper there was still the contention as to who should be greatest. They had doubtless often tried to learn His lessons, and firmly resolved not again to grieve Him. But all in vain. To teach them and us the much needed lesson, that no outward instruction, not even of Christ Himself; no argument however convincing; no sense of the beauty of humility, however deep; no personal resolve or effort, however sincere and earnest, can cast out the devil of pride. When Satan casts out Satan, it is only to enter afresh in a mightier, though more hidden power. Nothing can avail but this, that the new nature in its divine humility be revealed in power to take the place of the old, to become as truly our very nature as that ever was.

Taking Hold of the Indwelling Christ

Third, It is only by the indwelling of Christ in His divine humility that we become truly humble. We have our pride from another, from Adam; we must have our humility from Another too. Pride is ours, and rules in us with such terrible power, because it is ourselves, our very nature. Humility must be ours in the same way; it must be our very self, our very nature. As natural and easy as it has been to be proud, it must be, it will be, to be humble. The promise is, "Where," even in the heart, "sin abounded, grace did abound more exceedingly." (Rom. 5:20)  All Christ's teaching of His disciples, and all their vain efforts, were the needful preparation for His entering into them in divine power, to give and be in them what He had taught them to desire.

In His death He destroyed the power of the devil, He put away sin, and effected an everlasting redemption. In His resurrection He received from the Father an entirely new life, the life of man in the power of God, capable of being communicated to men, and entering and renewing and filling their lives with His divine power. In His ascension He received the Spirit of the Father, through whom He might do what He could not do while upon earth, make Himself one with those He loved, actually live their life for them, so that they could live before the Father in a humility like His, because it was Himself who lived and breathed in them. And on Pentecost He came and took possession. The work of preparation and conviction, the awakening of desire and hope which His teaching had effected, was perfected by the mighty change that Pentecost wrought. And the lives and the epistles of James and Peter and John bear witness that all was changed, and that the spirit of the meek and suffering Jesus had indeed possession of them.

What shall we say to these things? Among my readers I am sure there is more than one class. There may be some who have never yet thought very specially of the matter, and cannot at once realize its immense importance as a life question for the Church and its every member. There are others who have felt condemned for their shortcomings, and have put forth very earnest efforts, only to fail and be discouraged. Others, again, may be able to give joyful testimony of spiritual blessing and power, and yet there has never been the needed conviction of what those around them still see as wanting. And still others may be able to witness that in regard to this grace too the Lord has given deliverance and victory, while He has taught them how much they still need and may expect out of the fullness of Jesus.

To whichever class we belong, may I urge the pressing need there is for our all seeking a still deeper conviction of the unique place that humility holds in the religion of Christ, and the utter impossibility of the Church or the believer being what Christ would have them be, as long as His humility is not recognized as His chief glory, His first command, and our highest blessedness. Let us consider deeply how far the disciples were advanced while this grace was still so terribly lacking, and let us pray to God that other gifts may not so satisfy us, that we never grasp the fact that the absence of this grace is the secret cause why the power of God cannot do its mighty work. It is only where we, like the Son, truly know and show that we can do nothing of ourselves, that God will do all.

It is when the truth of an indwelling Christ takes the place it claims in the experience of believers, that the Church will put on her beautiful garments and humility be seen in her teachers and members as the beauty of holiness.
Humility - Andrew Murray