The Dormition of Our Lady, the Virgin Mary, the Theotokos 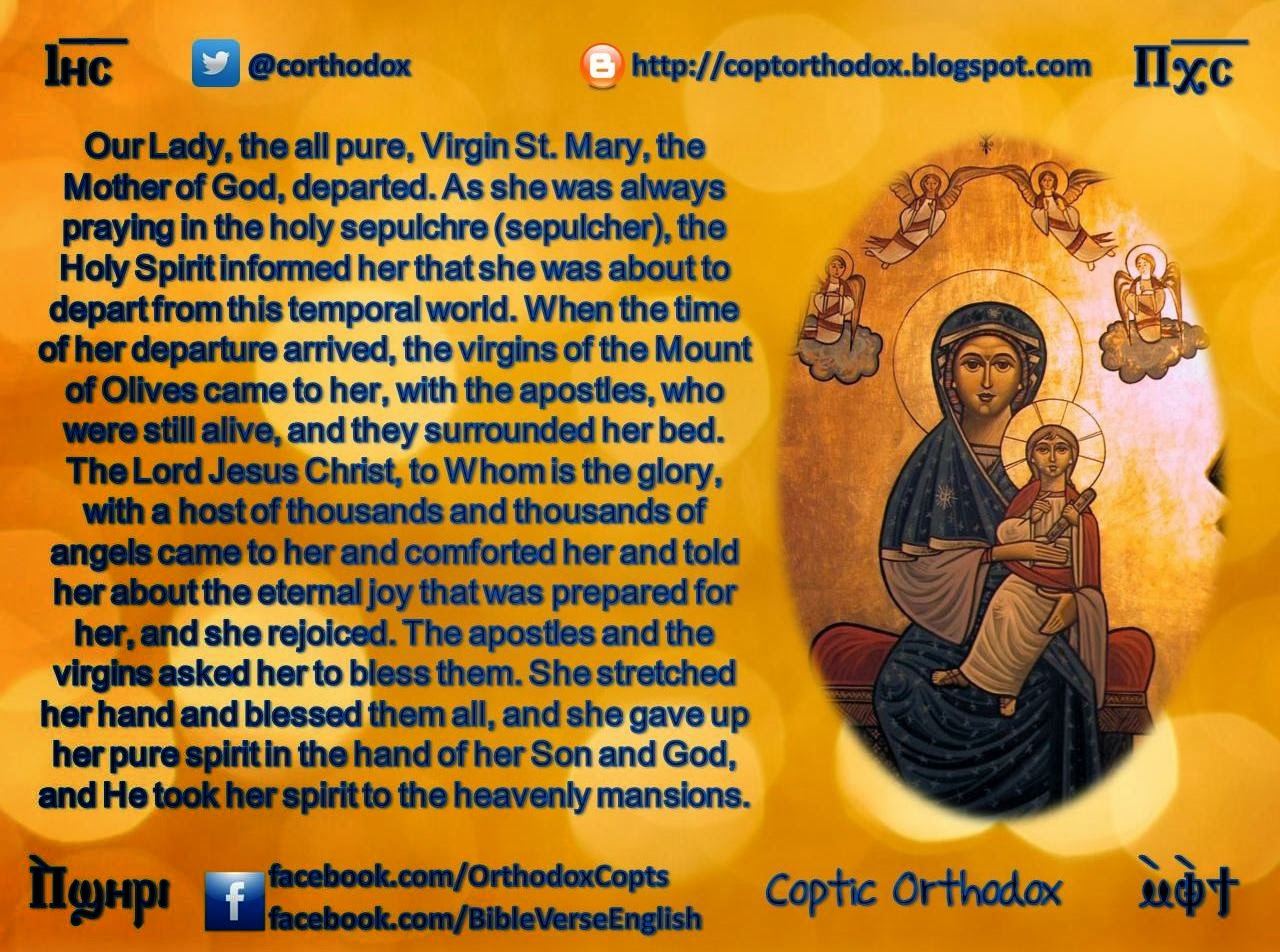 On this day, Our Lady, the all pure, Virgin St. Mary, the Mother of God, departed. As she was always praying in the holy sepulchre (sepulcher), the Holy Spirit informed her that she was about to depart from this temporal world. When the time of her departure arrived, the virgins of the Mount of Olives came to her, with the apostles, who were still alive, and they surrounded her bed. The Lord Jesus Christ, to Whom is the glory, with a host of thousands and thousands of angels came to her and comforted her and told her about the eternal joy that was prepared for her, and she rejoiced. The apostles and the virgins asked her to bless them. She stretched her hand and blessed them all, and she gave up her pure spirit in the hand of her Son and God, and He took her spirit to the heavenly mansions.

The apostles prepared the body in a fitting manner and carried it to Gethsemane. Some of the Jews blocked their way to prevent them from burying the body. One of the Jews seized the coffin with his hands, which were separated instantly from his body and they remained attached to the coffin. He regretted his evil deed and wept bitterly. Through the supplications of the saintly apostles, his hands were reattached to his body, and he believed in the Lord Christ. When they placed the body in the tomb, the Lord hid it from them.

When St. Thomas arrived where the disciples were, they told him about St. Mary's departure and he said to them, "You know how I conducted myself at the resurrection of the Lord Christ, and I will not believe unless I see her body." They went with him to the tomb, and uncovered the place of the body but they did not find it, and everyone was perplexed and surprised. St. Thomas told them how he saw the holy body and the angels that were ascending with it. They heard the Holy Spirit saying to them, "The Lord did not will to leave her body on earth." The Lord had promised his pure apostles to let them see her in the flesh once again. They were waiting for this promise to be fulfilled, until the 16th day of the month of Misra, when the promise was fulfilled and they saw her.

Her intercession and blessings be with us. Amen.

Posted by Coptic Orthodox at 7:02 PM