OUR MOTHER THE SAINT VIRGIN - By H.H. Pope Shenouda III 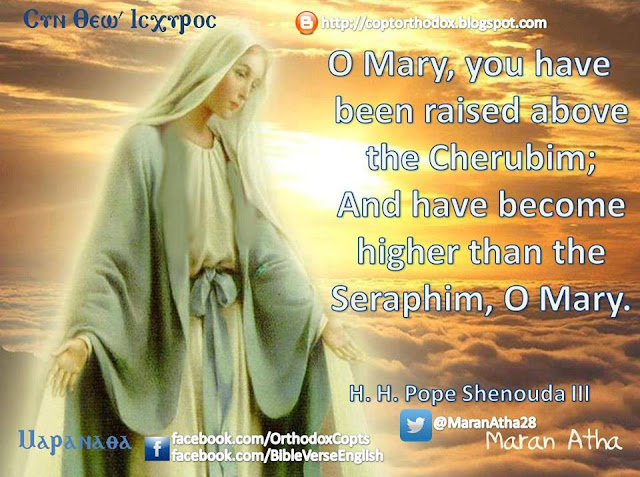 There is no woman about whom the prophets prophesied, and about whom the Holy Bible cared, like the Virgin Mary.......There are numerous symbols about her in the Old Testament. In the New Testament also, there are her biography, her praise, and the miracles. How many are the glorifying expressions and the contemplations, which were cited about the Virgin in the books of the fathers.........How full of praise are the surnames by which the Church calls her, and which are inspired from the Spirit of the Holy Bible.......!

This is the one whom the Church elevates over the rank of archangels, so that we say about her in her hymns and songs:
"O Mary, you have been raised above the Cherubim;
And have become higher than the Seraphim, O Mary."
Mary who was bred up in the temple, and lived the life of prayer and contemplation since her childhood, and who was the sacred vessel whom the Lord has chosen to come inside her.

Long generations waited for the birth of this Virgin, so that the fullness of the time would become complete by her (Gal.4:4)...........
She has removed the shame of Eva, and saved the reputation of women after sin.
She is the mother of God, in perpetual virginity.
She is the Virgin who came to our country during the childhood of Christ, and inhabited our land for years, during which she sanctified it, and blessed it.........
She is the Virgin who appeared in Zeitoun in the year 1968, and attracted to her the feelings of the crowds, with her light, her appearance, and her visit to us.........
She is the Virgin who makes miracles in numerous places, where we celebrate feasts for he. The stories of her miracles are innumerable.....
The Virgin is not a stranger to us; because she is profoundly assimilated with the feelings of Copts that come out from faith to special experience and emotion. How great an honor is it for our country and our Church, to be visited in past times by our Lady the Virgin! How great an honor is it that our Lady appeared on her domes many years ago!

THE OLDEST CHURCHES  DEDICATED TO HER NAME

On this occasion, we have two churches in Europe with the name  of "The Virgin of Zeitoun"; one is in France, and the other is in  Vienna.

THE GREATNESS OF THE VIRGIN

The greatness of the Virgin has been decreed in the sacred ecumenical council of Ephesus, which was assembled in 431 AD. Two hundred bishops from the world were present. They formulated the prelude to the creed of the Christian Faith, in which it is cited: "We venerate you, O mother of the true Light, and we glorify you, O Saint Virgin Mother of God, because you gave birth for us to the Saviour of the world, who has come and delivered our souls". What are the foundations upon which the ecumenical council formulated this prelude? That is what we shall explain now:

The Virgin is the blessed saint, whose blessing is continuous throughout the generations, as it has been mentioned in her hymn:
"For behold, henceforth all generations will call me blessed"  (Luke 1:46)

The Church calls the Virgin by the surname of "The Queen". This was mentioned by the psalm, about her:
"At Your right hand stands the queen" (Ps. 45:9)
That is why, many artists, when they draw the pictures of the Virgin, they put a crown on her head, and she appears in the image, on the right side of the Lord Christ.

The reverence of the Virgin appears in the salutation of the archangel Gabriel to her:  "Peace to you, O you full of grace, "the Lord is with you; blessed are you among women" (Luke 1:28). That is, with a special blessing, to which also saint Elizabeth gave testimony. "Then she spoke out with a loud voice and said, "Blessed are you among women, and blessed is the fruit of your womb" (Luke 1:42)
Saint Elizabeth found herself small in front of the greatness of the Virgin, and she spoke with the feeling that she was not deserving, although she knew that her son "will be great in the sight of the Lord", and that "He will also go before Him in the spirit and power of Elijah."  (Luke 1: 15-17)  She said:
"But why is it granted to me, that the mother of my Lord should come to me?" (Luke 1:43)
Probably the most evident proof of the greatness of the Virgin, and of her position in the sight of the Lord, is that when her mere greeting arrived to Elizabeth, the latter was filled with the Holy Spirit, and her babe felt it and leaped in her womb for joy. The divine Intuition says in that:
"And it happened, when Elizabeth heard the greeting of Mary, that the babe leaped in her womb, and Elizabeth was filled with the Holy Spirit." (Luke 1:41)

Elizabeth was filled with the Holy Spirit, by the greeting of Mary, and she also obtained the gift of prophecy and revelation:
She then knew that this is the mother of her Lord, and that she believed " those things which were told her from the Lord", and she also knew that the leaping of the babe was "for joy". This joy, of course, was because of the Blessed One who was in the womb of the Virgin, "blessed is the fruit of your womb."  (Luke 1: 41-45)

The majesty of the Virgin shines brilliantly in the choice of her by the Lord, from among all the women of the world.......
The only human being for whom the divine providence waited thousands of years, till He found her, and judged that she deserved that immense honor which the angel Gabriel explained saying: "The Holy Spirit will come upon you, and the power of the Highest will overshadow you; therefore also, that Holy One who is to be born will be called the Son of God" (Luke 1:35)

The Virgin excels all women in her eminence:
For that reason, the divine Intuition said about her: "Many daughters have done well, but you excel them all" (Prov. 31:29). It is probably from this divine text, that the song of the Church was taken:  "Many women have obtained honors, but no one of them obtained like you".........

This Saint Virgin, was in the thought and in the providence of God, since the beginning.
He said to our first parents, in the salvation which He promised them, that the Seed of the woman shall bruise the head of the serpent. (Genesis 3:15)  This woman is the Virgin, and her Seed is Christ, who has crushed the head of the serpent on the Cross.......

A LIFE SURROUNDED BY MIRACLES

In the life of The Virgin, miracles begin before her birth, and continue after her death. From these:
1. She was generated with a miracle, from sterile parents, with an annunciation from the angel.
2. The miracle of her betrothal, in a divine manner which determined who will take her and care for her.
3. The miracle of her conception of Christ while she is a virgin, and the continuation of her virginity after giving birth.
4. The miracle during her visit to Elizabeth who, when she heard the voice of her greeting, the babe leaped for joy in her womb, and she was filled with the Holy Spirit.
5. Innumerable miracles during her visit to Egypt, one of which is the fall of idols. (Is.19:1)
6. The first miracle which the Lord did in Cane of Galilee, happened through her request.
7. The miracle of the dissolution of iron, and the deliverance of the apostle Matthias, happened through her intervention.
8. The miracle of Christ receiving her soul, at the hour of her death.
9. The miracle of the striking of the Jews by the Lord, when they wanted to attack her corpse after her death.
10. The miracle of the ascent of her body to heaven.
11. The miracles which happened everywhere by her hands, about which books were written.
12. Her apparition in numerous places, and especially her wonderful apparition in our churches in Zeitoun, and in Papadopoulo.

Miracles are still happening everywhere, and will happen as a testimony to the honor of this saint.