THE MIRACLE OF PENTECOST - BY ST. JOHN CRYSOSTOM 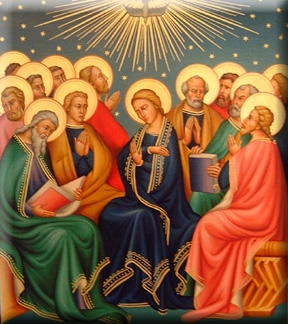 "This day the earth became Heaven for us. Not because the stars descended from the heavens to earth, but because the apostles ascended to Heaven by the grace of the Holy Spirit, which was now abundantly poured forth, and so the whole world was transformed into heaven; not because human nature was changed, but because there was a change in the direction of the will.

Evil fled away, and gentleness took its place.  Slavery was put away, and freedom came in its stead.  And all debts were forgiven, and the grace of God was conferred.  Therefore Heaven became earth; and from repeating this again and again I shall not cease."