THE ASCENSION OF CHRIST 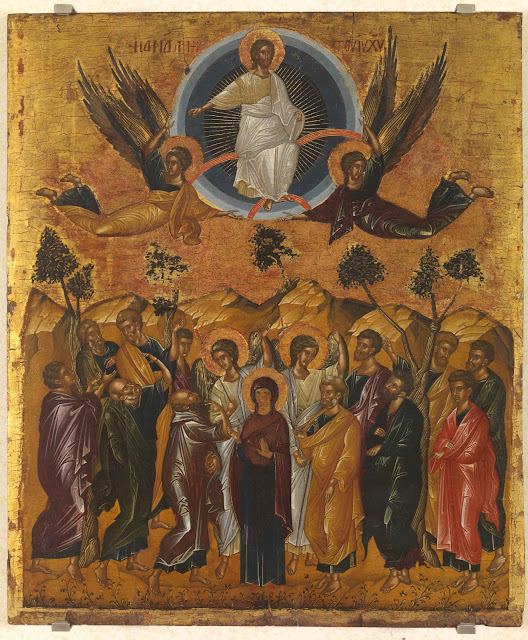 Excerpt from Homily III on the Ascension of Christ by St. John Chrysostom

The theater of the Church is joyous to me, not amusing men working futility, but causing great weeping to the devil. He sees above those who were dead below, as roots of the Resurrection. He sees Him Whom he delivered to the cross below, beheld in the heavens. He sees angels on earth in fulfillment. He sees Him paradoxically passing through the air. He sees the heavenly powers all gathered together to say: “Open the gates, our princes, and the King of glory shall enter”, and others saying in reply: “The Lord strong and mighty in war.” Which war? That against the common foe of all men, which neither men, nor prophets, neither the righteous were able to conquer....

For all, today's feast becomes even more serious, as we behold all the ranks of angels everywhere dancing, some following Him, other going before, others gathering around, others further with the choir of the apostles, telling them: “O Gallileans, why do you stand looking into heaven? This Jesus Whom you see ascended from you into heaven, He will come again in the same manner as you saw Him ascend to heaven.” This is Jesus Who showed a multitude of wonders. At this feast of the Master, the day of the Ascension, the devil is wailing, as we said, while the faithful are joyful. Now has the joyous spring dawned, and the beauty of flowers blossomed. The branches of vines are pruned, the olive trees give their sweet fragrance, the fig trees give their immature fruit, and the wind blows rustling the leaves, mimicking the dancing of the waves: all things rejoice with us at the ascension of the Master. Bring, therefore, with us the words of David, that we might rightly cry out to the Master Who has ascended: “Let all the nations clap their hands, crying to God with a voice of rejoicing. The Lord ascends with the sound of the trumpet, to where He was.” He ascends, but is not separated. For he who descended, has ascended above the heavens. The prophets saw no other, nor did the apostles eat with another. No other was in the bosom of the Father, nor was another judged by Pilate. No other was nailed to the cross with nails, nor was another carried by the Cherubim. No other was wrapped in a shroud by Joseph, nor does another hold creation in the palm of His hand. No other was laid in a tomb, nor was another hymned by the Seraphim. No other is seated with the Father, Who took root in the virginal womb. God ascended with a shout, the Lord with the cry of the trumpet, He Who is the Creator from the ages, Who brought all things into being, Who fashioned Adam, Who generated human nature, Who translated to life Enoch who pleased Him, Who preserved Noah together with the world, Who called Abraham from the land of the Chaldeans, Who made Isaac to be a sign of the mystery of the cross, Who granted Jacob the twelve-pillars of offspring, Who granted Job patience, Who made Moses to become the leader of the people, Who filled Samuel with prophecy from his mother's womb, Who anointed David as king from the prophets, Who granted Solomon wisdom, Who took up Elias in a flaming chariot, Who instilled the prophets with foreknowledge, Who granted the apostles gifts of healing, and Who cried to them: “Take heart, I have overcome the world.”

This is the Lord of glory Who is ascended into the heavens with a shout, and is seated on the right hand of the Father. Under His authority are angels, and dominions and powers, and it is He Who receives our pained prayers, and makes us victors over the pirates of this world. Under His dominion is every rank of the unclean spirits, as He says to us: “Behold, I have given you authority to trample upon snakes and scorpions.”

Unharmed and spotless, healthy and whole, preserve us in soul and body and spirit, filling us with the fruits of righteousness and fruitfulness, You Who are the God of all, You Who didst make us worthy to gather to celebrate this feast, for to You belong all glory, honor and worship, to the Father and to the Son and to the Holy Spirit, now and ever, and unto the ages of ages. Amen.