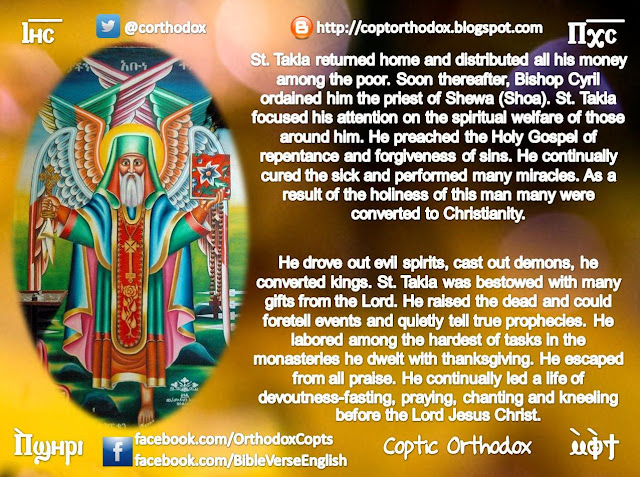 The great saint, Abba Takla Haymanot has a very prominent position in the Coptic Orthodox Church. The church celebrates an annual feast to commemorate the greatness of this Ethiopian saint (the saint's departure date/feast occurs on the 24th day of Mesra according to the Coptic calendar = Nehasse 24 according to the Ethiopian calendar = THE TWELVETH MONTH = August 30/31).

His father was an Ethiopian priest who loved Archangel Michael and his mother was a rich and righteous woman who also loved Archangel Michael. Together, they always celebrated the archangel's feast on the twelfth of each month. After many years of prayer and supplications a son, "Feseha Zion" (the joy of Zion) was born into this family, for St. Takla's mother was barren until his birth.
The tidings of Archangel Michael were fulfilled when he said to Tsega Ze-Ab, Feseha Zion's father, "You will be the father of a child who will be an apostle in Ethiopia." His parents were overjoyed with his birth and celebrated by having a feast inviting the poor. Three days after his birth, the Holy Spirit descended upon Fesha Zion and the infant opened his mouth and said, "One is the Holy Father. One is the Holy Son. One is the Holy Spirit."

Since childhood, Feseha Zion performed many miracles. One such famous miracle occurred at the age of eighteen months. A famine had spread throughout the land of his family. As a result of the famine, Tsega Ze-Ab and his wife had nothing to celebrate the feast of their beloved Archangel Michael.

One day while Fesha Zion was being nursed he pointed to the flour basket, which was completely empty. His devout mother brought it to him and immediately when he touched the basket it became filled with flour. Basket after basket was placed before him until twelve overflowed with flour. She then decided to bring the oil jar to him. Fesha Zion placed his hand inside the jar and made the sign of the cross. Oil began to fill the jar. From this jar the mother poured oil into other jars until there was plenty for their monthly agape for the needy in honor of Archangel Michael.

When he was fifteen years old his reverent father took him to the Bishop of Amhara, Bishop Kyrillos, who saw a vision from God to ordain Feseha Zion a deacon. As a deacon he continued to perform miracles and began to heal the sick. Many confessed him to be a god, but he told them that only the One True God is worthy of honor, praise and worship.
One day while hunting with friends, Archangel Michael appeared unto deacon Feseha Zion and told him to dedicate the rest of his life to saving people's souls. The Archangel further told him that God would bestow upon him the ability to cure many illnesses, raise the dead, and cast out evil spirits in His Holy Name. It was then that Archangel Michael changed his name to Takla Haymanot, which means, "Paradise of the Father, the Son, and the Holy Spirit."

St. Takla returned home and distributed all his money among the poor. Soon thereafter, Bishop Cyril ordained him the priest of Shewa (Shoa). St. Takla focused his attention on the spiritual welfare of those around him. He preached the Holy Gospel of repentance and forgiveness of sins. He continually cured the sick and performed many miracles. As a result of the holiness of this man many were converted to Christianity.
He drove out evil spirits, cast out demons, he converted kings. St. Takla was bestowed with many gifts from the Lord. He raised the dead and could foretell events and quietly tell true prophecies. He labored among the hardest of tasks in the monasteries he dwelt with thanksgiving. He escaped from all praise. He continually led a life of devoutness-fasting, praying, chanting and kneeling before the Lord Jesus Christ.

Why St. Takla's icon depicts him with six wings

One of the most famous of stories related to this saint is of his abiding in the Monastery of Abba Aragawi at the top of a very high, steep mountain. After living some time at this remote monastery, an angel of the Lord appeared to St. Takla and told him to go down to the base of the mountain and dwell in a cave to be found there. He bid the abbot of the monastery and the monks farewell, requesting their prayers and began his descent from the top of the towering mountain. As was the custom, the monks tied the saint with a rope to aid in his descent from the peak of the mountaintop. The rope broke suddenly and the monks feared the worst. Instantly and miraculously, six wings appeared from the saint and flew him safely and swiftly to the base of the mountain. Due to this miracle St. Takla's icon features him with six beautiful white wings like the Cherubim.

Posted by Coptic Orthodox at 5:57 PM