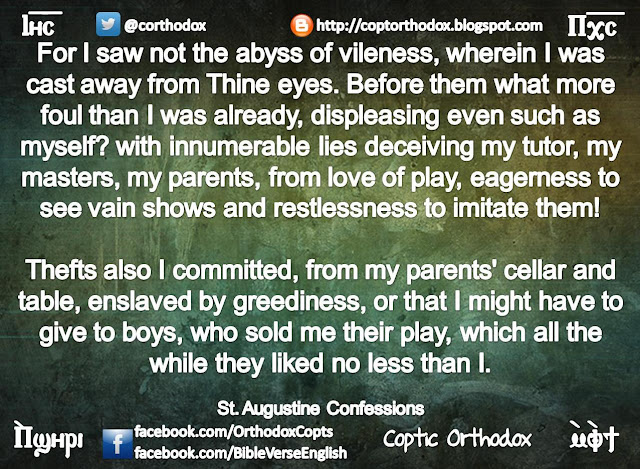 This was the world at whose gate unhappy I lay in my boyhood; this the stage where I had feared more to commit a barbarism, than having committed one, to envy those who had not. These things I speak and confess to Thee, my God; for which I had praise from them, whom I then thought it all virtue to please.

For I saw not the abyss of vileness, wherein I was cast away from Thine eyes. Before them what more foul than I was already, displeasing even such as myself? with innumerable lies deceiving my tutor, my masters, my parents, from love of play, eagerness to see vain shows and restlessness to imitate them!

Thefts also I committed, from my parents' cellar and table, enslaved by greediness, or that I might have to give to boys, who sold me their play, which all the while they liked no less than I.

In this play, too, I often sought unfair conquests, conquered myself meanwhile by vain desire of preeminence. And what could I so ill endure, or, when I detected it, upbraided I so fiercely, as that I was doing to others? and for which if, detected, I was upbraided, I chose rather to quarrel than to yield. And is this the innocence of boyhood?

Posted by Coptic Orthodox at 12:34 AM