The Martyrdom of St. John the Baptist IN THE NAME OF THE FATHER AND THE SON AND THE HOLY SPIRIT, ONE GOD.  AMEN. 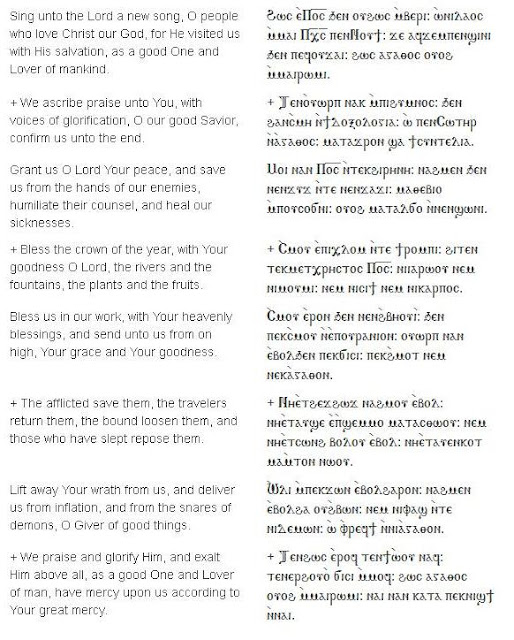 On this day, the forerunner and great prophet, St. John the Baptist, son of Zacharias the priest, was martyred by the order of King Herod. When St. John rebuked Herod because of Herodias, the wife of his brother Phillip whom he had taken as a wife, he said to him, "It is not lawful for you to have your brother's wife." (Mark 6:18) Herod seized the Saint and cast him into prison; however, he feared John.

An opportune day came when Herod, on his birthday, gave a feast for his nobles, the high officers and the chief men of Galilee. And when Herodias' daughter herself came in and danced and pleased Herod. He promised her anything she might ask for, even as much as half of his kingdom. She went to her mother and asked her, "What shall I ask?" Her mother said, "Ask for the head of John the Baptist on a platter." When Herod heard this, he was exceedingly sorry. But because of his promise and those who were sitting with him, he did not want to refuse her request. He therefore commanded his servants to cut off the head of Saint John and they gave it to the damsel and the damsel gave it to her mother. (Mark 6:20-28) There was great consternation that day, and their joy soon turned into sorrow.

It was said that when the holy head of St. John was cut off, it flew up off their hands into the air, and it cried out saying, "It is not right for you to take your brother's wife." It is also said that the head now is present at Homs in Syria.

As of the holy body, the disciples of St. John took it and laid it in a grave until the days of Pope Athanathius, when God Willed to uncover his body.

His blessings be with us all. Amen.

On this day Saint John the Baptist, son of Zacharias the priest, became a martyr by the hand of Herod the wicked king.  This John the prophet rebuked Herod because of Herodias, the wife of Philip, for he had married her and taken her to be his wife, and John said unto him, “It is not right for thee to take thy brother’s wife.”  And Herod took Saint John and cast him into prison, and he kept him there because he was afraid of him.  And when his birthday came Herod made a feast for the nobles of his kingdom and for the magistrates of the city of Galilee.  And his brother’s daughter came and stood up among the festal company and she danced and pleased the king, and he swore an oath that he would give her anything which she might ask from him, even if it were as much as the half of his kingdom.  And she went out to her mother, and she said unto her, “What shall I ask the king to give me?”  And her mother said unto her, “Ask him to give thee the head of John the Baptist lying in a bowl.”  And when Herod heard this he was exceedingly sorry, but because of his oath and also because of those who were sitting at meat with him, and because he did not wish to be put to shame, he straightway commanded his servants to cut off the head of Saint John, and to give it to the maiden.  And they cut off the head of John in the prison house and gave it to the daughter of Herodias in a bowl and she gave it to her mother.  And there was great consternation that day, and their joy was turned to sorrow.  And when the holy head of Saint John was cut off, it flew up into the air out of the hands of the soldiers, and it cried out, saying, “It is not right for thee to take thy brother’s wife”; and it is said that the head is at the present time in the country of Arabia.  And the disciples of the holy man came and took his body and carried it away and laid it in a grave [where it lay] until the days of Saint Athanasius, Archbishop of the city of Alexandria.  And God commanded him to uncover the body of Saint John, and Saint Athanasius did so and laid it up by him until he could build a church for it.  May his intercession be with us.


Cutting Off The Head Of John The Baptist - St. John Chrysostom
http://orthodoxsocities.blogspot.com/2015/09/cutting-off-head-of-john-baptist.html

Posted by Coptic Societies at 3:41 PM