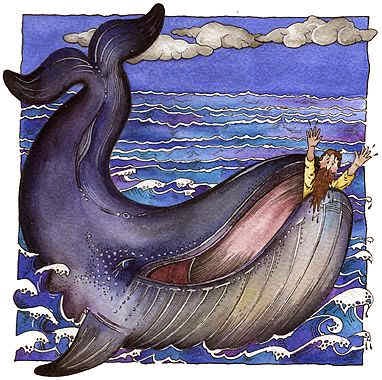 The history of Jonah contains a great mystery. For it seems that the fish signifies Time, ‎which never stands still, but is always going on, and consumes the things which are made by long ‎and shorter intervals.

But Jonah, who fled from the presence of God, is himself the first man who, having ‎transgressed the law, fled from being seen naked of immortality, having lost through sin his ‎confidence in the Deity.

The ship in which he embarked, and which was tempest-tossed, is this brief and hard life ‎in the present time. Just as though we had turned and removed from that blessed and secure life, ‎to that which was most tempestuous and unstable, as from solid land to a ship. For what a ship is ‎to the land, that our present life is to eternal life.

The storm and the tempests which beat against us are the temptations of this life, ‎which in the world, as in a tempestuous sea, do not permit us to have a fair voyage free from ‎pain, in a calm sea, and one which is free from evils. ‎

The casting of Jonah from the ship into the sea, signifies the fall of the first man from ‎life to death, who received that sentence because, through having sinned, he fell from ‎righteousness: “You are dust, and unto dust you shall return.”

His being swallowed by the whale signifies our inevitable removal by time. For the belly ‎in which Jonah, when he was swallowed, was concealed, is the all-receiving earth, which ‎receives all things which are consumed by time.

As Jonah spent three days and nights in the belly of the fish and was delivered up ‎sound again, all of us who have passed through the three stages of our present life on earth—the ‎beginning, middle, and end— rise again. For our present time consists of three intervals: the past, ‎the future, and the present. Thus, the Lord spent three days in the earth as a symbol to teach us ‎clearly that our resurrection shall take place after these intervals of time have been fulfilled. Our ‎resurrection shall be the beginning of the future age and the end of this. In that age, there is ‎neither past nor future, but only the present.

Moreover, Jonah having spent three days and three nights in the belly of the fish, was ‎not destroyed by his flesh being dissolved, as is the case with that natural decomposition which ‎takes place in the belly, in the case of those meats which enter into it, on account of the greater ‎heat in the liquids, that it might be shown that these bodies of ours may remain undestroyed. For ‎consider that God had images of Himself made as of gold, that is of a purer spiritual substance, ‎as the angels; and others of clay or brass, as ourselves. He united the soul which was made in ‎the image of God to that which was earthy. As, then, we must here honor all the images of a king, ‎on account of the form which is in them, so also it is incredible that we who are the images of God ‎should be altogether destroyed as being without honor. Whence also the Word descended into ‎our world, and was incarnate of our body, in order that, having fashioned it to a more divine ‎image, He might raise it incorrupt, although it had been dissolved by time. And, indeed, when we ‎trace out the dispensation which was figuratively set forth by the prophet, we shall find the whole ‎discourse visibly extending to this.‎