Commemoration of Consecration of The Church of St. Demiana 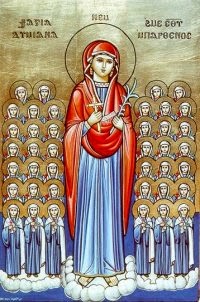 On this day, the church commemorates the consecration of the church of the virgin St. Demiana. This pure and fighting virgin was the daughter of Mark, who was the governor of El-Borollus, El-Zaafran and the valley of Saisaban. She was the only child of her parents. When she was one year old, her father took her to the church that was in the monastery of El-Maima. He offered gifts there so that God might bless this daughter and keep her safe Him.

When she was fifteen years old, her father wanted to get her married. She refused and told him that she had vowed herself a bride for the Lord Christ. When she found that her father was pleased of her decision, she asked him to build her an isolated palace, so that she could worship God with her virgin friends, and right away he did what she asked. He built the palace where she and the forty virgins lived in. They spent their time by reading the Holy Bible and praying fervently to God.

Shortly after, Emperor Diocletian sent for Mark her father and ordered him to worship the idols, but he refused at first. However, after some persuasion, Mark obeyed him and worshipped the idols, forsaking the creator of the universe.

When Mark returned, and St. Demiana knew of what her father had done, she rushed to meet him without a greeting saying: "What have I heard about you? I wished I have Heard the news of your death, and not knowing that you have forsaken God who have created you and worshipped what is made by hands. If you insist on what you have done and you do not relent by denouncing the idols, you are not my father, and I am not your daughter." She also said to him: "It is better for you, O my father, that you die a martyr and live with Christ in heaven forever, than you live as a pagan here and die with the devil in hades forever." Then she left him. Her father was moved by what she said and wept bitterly. He went in hurry to Diocletian and confessed the Lord Christ before him. When Diocletian could not change his mind, he ordered him to be beheaded.

When Diocletian knew that the one who turned Mark away from worshipping the idols was his daughter Demiana, he sent to her a prince to persuade her at first, and if she did not obey, he would cut off her head. The Prince came to her with an entourage of one hundred soldiers armed with all instruments of torture. When he arrived to her palace, he went to her and said: "I am an envoy sent by Emperor Diocletian. I came to ask you, according to his orders, to worship his gods, so he might grant you whatsoever you wish." St. Demiana shouted at the prince saying: "Curse the messenger and he who sent him. Are you not ashamed to call stones and wood gods that only dwelt by devils? There is no other God in heaven or on earth except the one God, the Father, the Son and the Holy Spirit, the Creator, Who has no beginning and no end, the Omnipresent, and the Omniscient God, who will throw you in hell for eternal condemnation. As for me, I worship my Lord and Savior Jesus Christ and His Good Father and the Holy Spirit, the Holy Trinity. I profess Him, depend on Him, and in His name I die and by Him I will live forever." The Prince became angry of what she said, and ordered her to be placed in the body press. Her blood poured out on the ground, and the virgins were standing, weeping for her. Then they put her in prison, where the angel of the Lord appeared to her and touched her body with his celestial wings and healed her from all her wounds.

The Prince was creative in the ways he tortured St. Demiana, sometimes by rending her flesh, or placing her in boiling grease and oil. In all that, the Lord strengthened her and raised her up whole. When the Prince saw that his efforts were of no avail and the steadfastness of this pure virgin, he ordered her to be beheaded with all the virgins with her. They all received the crowns of martyrdom. (The account of her martyrdom is mentioned in the 13th day of Tubah)

When Constantine knew of all what had happened to St. Demiana, and how she endured for a long time in the valley of El-Saisaban, he delegated his blessed mother St. Helena to take burial clothing, go to El-Zaafran, and build a church in the name of St. Demiana and the forty virgins, there.

St. Helena came to the valley, went up to the palace, and found that the bodies were unharmed. She found St. Demiana in the place where she used to sit and around her the forty virgins. She kissed the body, taking the blessing of the Saint and wrapped the bodies with expensive shrouds. She gathered the craftsmen and architects, tore down the palace, and built instead a well built tomb (Cellar) underground. She laid the body of St. Demiana on an ivory bed, and covered her with a precious bedspread and laid the forty virgins around her in it. Then she built a small and beautiful church which had one dome on the top of it. The church was consecrated by Pope Alexandros, the nineteenth Patriarch of Alexandria, on the 12th. of Bashans. He also ordained a saintly bishop, priests, and deacons to serve in the church day and night in prayers.

The bishop of this area, El-Zaafran and El-Borollus, was martyred and his body was placed in this church among the bodies of other martyrs. Abba Yoannis, Bishop of El Borullus, said in his book, The History of the Church: "The church was destroyed in the 8th. century by one of the Arab rulers, who built in its place a palace for his residence."

At this time, the water of the Mediterranean sea flooded the Delta of the Nile river until it reached the city of Samannoud to the western side of the church that called "Zion" by the old citadel. This flooding was caused by the deterioration of the barrier, which held back the sea water. When the news reached the king Hassan Ibn Atahia, he was saddened because this district brought the government much money because it was rich in its highly priced aromatic plants. One of his close aids, who was a Jew, told the king to bring the Patriarch of the Copts and order him to pray in faith to return everything to where they were before the flood.

God assisted this Patriarch through the help of one of the holy men who was known as El-Toffahi in this trying time. The Patriarch prayed in the church at Samannoud in the presence of the king. Then the Patriarch went out of the church raising the Cross. The people were saying Lord have mercy and the holy man, El-Toffahi, behind him. Instantly, the water receded to the north before them. The Patriarch, behind him El-Toffahi, the priests, the people, and the king continued to walk until they arrived to El-Zaafran where they erected tents for the king beside the destroyed palace, under which the body of St. Demiana along with the bodies of the forty martyrs were kept. The Patriarch prayed and knelt to the ground with all the people with him. At this moment, a great miracle and sign occurred that amazed everyone. A great wind blew in the sea and the waves became very high, which caused great quantities of sand to form a great barrier with the power of God almighty which was stronger than the original one. Then the winds calmed down.

The Patriarch returned to the king, who received him with honor and told him: "O Patriarch, ask from me, something to do for you." The Patriarch replied: "I need your assistance in building a church in this place because it contains the bodies of Saints who were martyred, for they refused to worship idols. The king ordered that the place be cleaned. The Patriarch opened the door of the cellar, went down, and found the forty bodies of the martyrs around the bed of St. Demiana. The king ordered at once to build a church with one dome, which was consecrated by the Patriarch on the 12th day of Bashans.

The news of this church spread in all the country and the people came with their offerings to it. The church was consecrated for the first time during the reign of Constantine and the second time was on this day.

The king ordered that no one disturb the Copts, so it was a peaceful and tranquil time in all Egypt. The king returned to his palace in Misr (Cairo) and always asked the Patriarch to visit him periodically. He came to visit the king with great honor till his departure.

The king of Egypt at that time was Hassan Ibn Atahia, who was just, loved the churches, and treated the bishops and the monks with great respect. He loved Pope Khail the first, the forty-sixth Patriarch of Alexandria (743 - 767 A.D.), and came often to visit him. He discussed the affairs of the country with him.

May the prayers of St. Demiana be with us. Amen.