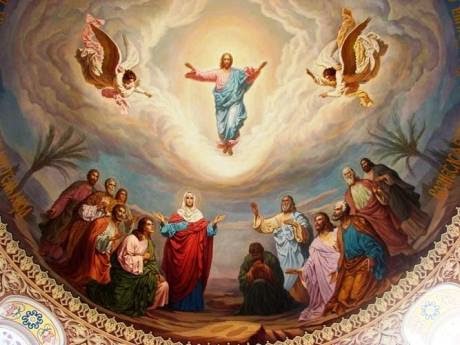 
For heaven was then utterly inaccessible to mortal man, and no flesh as yet had ever trodden that pure and all-holy realm of the angels; but Christ was the first Who consecrated for us the means of access to Himself, and granted to flesh a way of entrance into heaven; presenting Himself as an offering to God the Father, as it were the first fruits of them that are asleep and are lying in the tomb, and the first of mankind that ever appeared in heaven.

Therefore also it was that the angels in heaven, knowing nothing of the august and stupendous mystery of the Incarnation, were astonished in wonder at His coming, and exclaim almost in perplexity at the strange and unusual event: Who is this that cometh from Edom? that is, from the earth. But the Spirit did not leave the host above uninstructed in the marvelous wisdom of God the Father, but bade them rather open the heavenly gates in honor to the King and Master of all, proclaiming: Lift up the gates, O ye princes, and be ye lift up, ye everlasting doors, and the King of Glory shall come in.

Therefore our Lord Jesus the Christ consecrated for us a new and living way, as Paul says; not having entered into a holy place made with hands, but into heaven itself, now to appear before the face of God for us. For it is not that He may present Himself before the presence of God the Father that Christ has ascended up on high: for He ever was and is and will be continually in the Father, in the sight of Him Who begat Him, for He it is in Whom the Father ever takes delight: but now He Who of old was the Word with no part or lot in human nature, has ascended in human form that He may appear in heaven in a strange and unwonted manner. And this He has done on our account and for our sakes, in order that He, though found as a man, may still in His absolute power as Son, while yet in human form, obey the command: Sit Thou on My right hand, and so may transfer the glory of adoption through Himself to all the race.

For in that He has appeared in human form He is still one of us as He sits at the right hand of God the Father, even though He is far above all creation; and He is also Consubstantial with His Father, in that He has come forth from Him as truly God of God and Light of Light. He has presented Himself therefore as Man to the Father on our behalf, that so He may restore us, who had been removed from the Father's presence by the ancient transgression, again as it were to behold the Father's face. He sits there in His position as Son, that so also we through Him may be called sons and children of God.
St. Cyril

Email ThisBlogThis!Share to TwitterShare to FacebookShare to Pinterest
Labels: Above All, Ascended, Ascension, Children of God, Creation, Fathers Sayings, Heaven, Light of Light, Obey, Offering of God, Restores, Right Hand of The Father, Sayings, St. Cyril, The Father, The Son