16 - BE RELEASED FROM THE DESIRE TO BE TEACHERS - By H.H. Pope Shenouda III 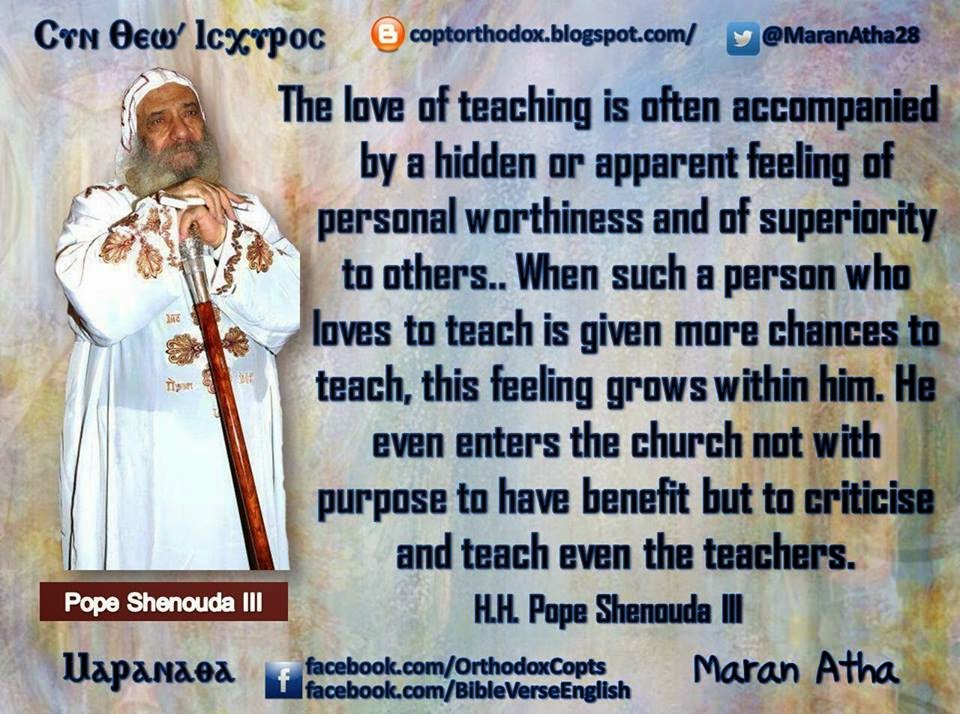 16 -  BE RELEASED FROM THE DESIRE TO BE TEACHERS
By H.H. Pope Shenouda III

16 -  BE RELEASED FROM THE DESIRE TO BE TEACHERS

The desire to be a teacher involves a great danger.. So, avoid it, my beloved brother, and fly from it as far as you can.

Do you not agree with me, my dear brother, that we are not yet mature enough nor have complete knowledge of all things? There are certain things which we consider from one point of view only and so we misunderstand them. For example when we interfere to teach others religion, we do not teach it to them in its true concept but as we understand it in our age and in our particular level of spirituality and mentality.. But as we grow older and perhaps our spirituality and mentality develop and our understanding of religion differs.. what then would be the state of those who learnt from us in the beginning?

For this and other reasons as well, St. James the Apostle says, ".. let not many of you become teachers, knowing that we shall receive a stricter judgement. For we all stumble in many things." (James 3:1-2)

Jeremiah the Prophet also says to God, "Behold, I cannot speak, for I am a youth" (Jer. 1:6). And Isaiah the Prophet speaking about himself says, ".. I am a man of unclean lips." (Is. 6:5)  We have St. Bachomius as another example.. when people used to come to him seeking a word of benefit, he refused to speak but introduced to them his disciple Tadros. And the Spirit of God spoke on the mouth of that holy disciple..

Another old father when one of the young monks came to learn something from him, he said to him, 'Stay in your cell and it will teach you everything'. And the young monk returned to his cell benefiting from those words..

There are many other stories which I leave to you to read by yourself and take the benefit which God gives you through them. Here, before moving to another point I want to remark that many of the teachings of the holy fathers have reached us by one of two means: Either one of the monks wrote down the words of the old father during his talks with other brother monks, or the father himself recorded his meditations for his own benefit and they were found in his cell after his passing away and people benefited from them.

My beloved brother, there is a very great difference between the ministry of teaching which the Holy Bible entrusted to certain persons and the love of being teachers..

The last is of great danger.. It sometimes becomes a disguised devil.. The love of teaching is often accompanied by a hidden or apparent feeling of personal worthiness and of superiority to others.. When such a person who loves to teach is given more chances to teach, this feeling grows within him. He even enters the church not with purpose to have benefit but to criticise and teach even the teachers. He never feels need to take but he always gives.. There will be a time when such a person finds nothing to give, for what he has will dry up...

Unlike this person were the fathers who used to learn continually and benefit from everything..

· St. Anthony the great monk was able to benefit from the words of a woman who was not ashamed to take off her clothes to bathe before a monk..

· St. Macarius also, the father of the desert of Shihit learned a lesson from a young boy.

· St. Arsanius who studied the wisdom of the Greeks and Romans learnt also from an illiterate Egyptian..

All those fathers had souls which flew like an active bee to gather nectar from every flower!
Another danger behind the love of teaching is to become so involved in teaching and you forget yourself. I remember this in regard to a Zealous person who used to read the Holy Bible not with purpose to get benefit but in order to prepare a lesson..

When he gave alms, this was not out of love for the poor but to be as a model to people.. He used to be cautious in his actions not being convinced with doing so but in order not to offend others.. Even when he sat with some people, he did not learn something from them but his only concern was to examine what they said as a master and then wisely explain the proper situation.. He once said that when he stood to pray and it happened that God's Spirit worked within him giving him a certain feeling, or a certain meditation, he did not hesitate to stop his prayer and sit down to record such things to teach them to people.. Hence the means of grace have lost their objective in the life of such a person and teaching became everything to him.

Another word I want to whisper in your ear, is beloved to my heart, ie. What do you want to teach people? Is it religion? Do you think that religion is mere knowledge which one may fill the mind with? I fear most, my dear striver, that this way of teaching religion will turn it into a subject to be studied and people examine it like any branch of learning.. In fact, religion is spirit and life as you certainly know..

The Zealous person then asked me, 'But I am a teacher in the church, what can I do then? 'I answered him, "I wish you to be alive in spirit, my dear brother. I'll tell you the truth, you do not in fact teach those souls entrusted to you but you love them.. Such souls which you see surrounding you are attracted not by your teaching but by love.. the 'love' which never fails because it is God's.