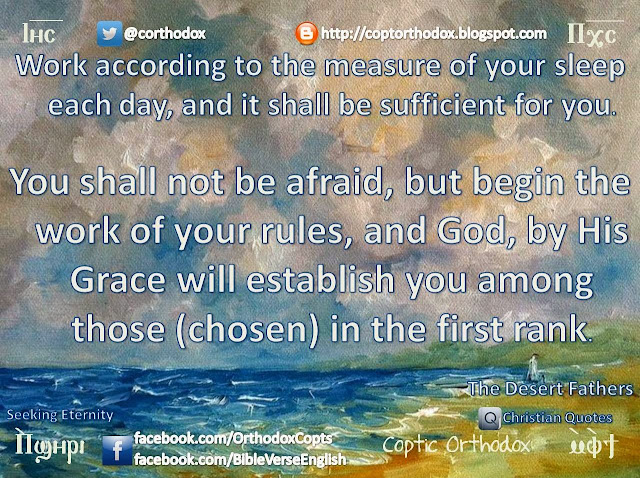 A certain brother fell into temptation, and through tribulation relinquished the garb of monk-hood; and he wished to begin to renew his ascetic life. He saw the great difficulty of the matter, and he drew back, and said to himself; "When shall I ever find myself in the same condition as I was formerly in?"

Through fear he did not begin his work. He went and made the matter known to an old man. The old man said: "The matter is thus: There was a certain man who possessed an estate, he held it to be of no account and did not cultivate it. It became full of tangled undergrowth and thorns.

Now one day he remembered it, so he sent his son and said to him: 'Go clean the estate.' When the son had gone and seen the abundance of the undergrowth, he was afraid and said to himself; 'When shall I be able to clean away all this undergrowth?' He threw himself upon a bed, lay down and went to sleep, and thus he did everyday.

His father went forth and found that he was asleep, and had done nothing. He asked him; 'How is it, my son, that no work whatsoever has been done by you?' The son answered: 'When I came to work and saw the abundance of the undergrowth, I was afraid. I thought to myself; 'When shall I be able to clean all this away?'

His father said: 'My son, work according to the measure of your sleep each day, and it shall be sufficient for you.'
When he heard this the young man plucked up some courage, and did thus, and in a short time he cleansed the estate.

Thus also you shall not be afraid, but begin the work of your rules, and God, by His Grace will establish you among those in the first rank."
Now when the brother had done thus he was helped.

Posted by Coptic Orthodox at 12:20 PM