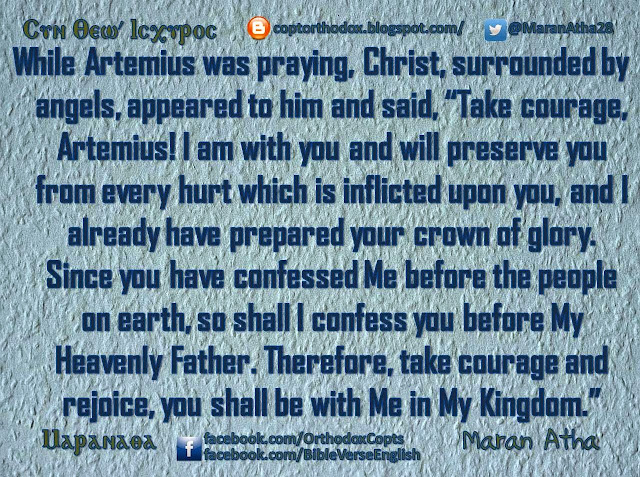 Holy Great Martyr Artemius of Antioch was a prominent military leader during the reigns of the emperor Constantine the Great (May 21), and his son and successor Constantius (337-361). Artemius received many awards for distinguished service and courage. He was appointed viceroy of Egypt. In this official position he did much for the spreading and strengthening Christianity in Egypt.

The emperor Constantius was succeeded on the throne by Julian the Apostate (361-363). Julian in his desire to restore paganism was extremely antagonistic towards Christians, sending hundreds to their death. At Antioch he ordered the torture of two bishops unwilling to forsake the Christian Faith.

During this time, St Artemius arrived in Antioch and publicly denounced Julian for his impiety. The enraged Julian subjected the saint to terrible tortures and threw the Great Martyr Artemius into prison. While Artemius was praying, Christ, surrounded by angels, appeared to him and said, “Take courage, Artemius! I am with you and will preserve you from every hurt which is inflicted upon you, and I already have prepared your crown of glory. Since you have confessed Me before the people on earth, so shall I confess you before My Heavenly Father. Therefore, take courage and rejoice, you shall be with Me in My Kingdom.” Hearing this, Artemius rejoiced and offered up glory and thanksgiving to Him. 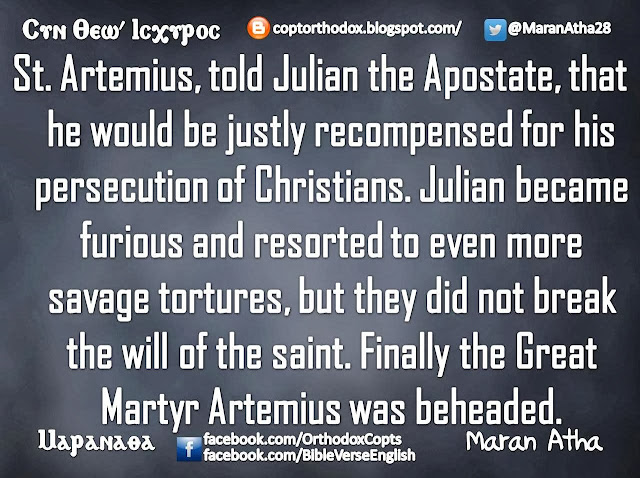 On the following day, Julian demanded that St Artemius honor the pagan gods. Meeting with steadfast refusal, the emperor resorted to further tortures. The saint endured all without a single moan. The saint told Julian that he would be justly recompensed for his persecution of Christians. Julian became furious and resorted to even more savage tortures, but they did not break the will of the saint. Finally the Great Martyr Artemius was beheaded.

His relics were buried by Christians. After the death of St Artemius, his prophecy about Julian the Apostate’s impending death came true.

Julian left Antioch for a war with the Persians. Near the Persian city of Ctesiphon, Julian came upon an elderly Persian, who agreed to betray his countrymen and guide Julian’s army. The old man deceived Julian and led his army into the Karmanite wilderness, where there was neither food nor water. Tired from hunger and thirst, Julian’s army battled against fresh Persian forces.

Divine retribution caught up with Julian the Apostate. During the battle he was mortally wounded by an unseen hand and an unseen weapon. Julian groaned deeply said, “You have conquered, Galilean!” After the death of the apostate emperor, the relics of the Great Martyr Artemius were transferred with honor from Antioch to Constantinople.

St Artemius is invoked by those suffering from hernias.

Posted by Coptic Societies at 8:45 PM