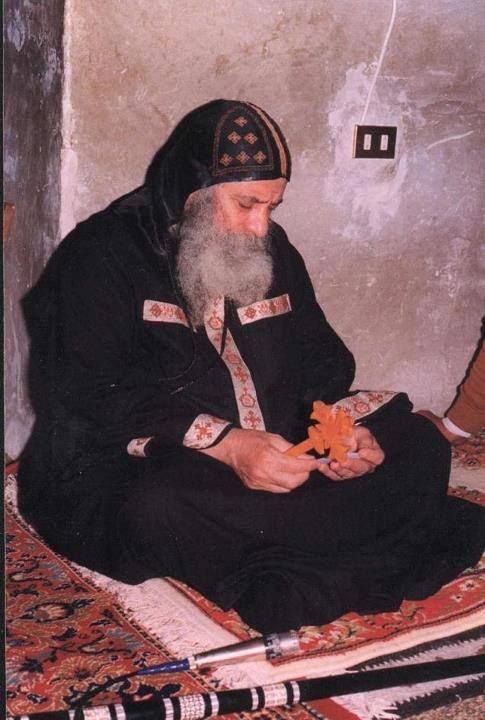 11 - YOUR SELF IN THE PRESENCE OF GOD
By H.H. Pope Shenouda III

11 - YOUR SELF IN THE PRESENCE OF GOD

Again, my beloved brother, I want to talk to you about your 'self; that which you sometimes love and trust more than God... Unless you deny yourself, you will never enjoy the beauty of the release of the spirit.

As love is the first commandment in Christianity, self-denial is the main path leading to love.. You cannot love God and people as long as you are concerned only about yourself and your pleasures.. So, be released first from this self, for the Lord glory be to Him says, "Whoever desires to come after Me, let him deny himself, and take up his cross, and follow Me."  (Mark. 8:34)

Thus, the Lord made self-denial the first requirement.

My beloved brother, let your aim be to conceal yourself in God so as not to have an independent existence separate from Him.. Say along with St. Paul the Apostle, "It is no longer I who live, but Christ lives in me."  (Gal. 2:20)

If you ever wish to have glory, let your glory be from God and in God's sight.. and repeat always the verse which says, "O Father, glorify Me together with Yourself." (John 17:5)  Do not seek glory in the worldly things because".. the world is passing away, and the lust of it" (1 John 2:17)  But you, who are the son of God.".. you are the temple of God and.. the Spirit of God dwells in you.." (1 Cor. 3:16)  You are born,"..  not of blood, nor of the will of the flesh, nor of the will of man, but of God." (John 1:13)  That soul of yours is from God, a breath of His mouth.. In every Mass, you partake of the Holy Flesh and Blood of God to be one with Him and abide in Him as He wants.. Why then do you neglect such a great glory to seek another in the dust?

Why are you concerned about what others say of you and why do you become pleased when they praise you and defend yourself when they attack you? Why do you beg their approval by talking about yourself My brother, I am afraid you still love the dust and the glory of it! Is your self still an idol which you give sacrifices and offerings to? Deny yourself, my dear, and give all your love to God alone.. Say along with John the Baptist, "He must increase, but I must decrease."  (John 3:30)

I hear you grumbling, 'I do not want to decrease'.. Know then that you will not lose except the dregs that spoil your purity, and the worldly glory which is the dust that sticks to you.. You have to remove yourself of such glory to return clean as God has created you and as He wants you to be always.

That concerns your relations with the others.., but I want to talk to you concerning your look towards yourself and how you ought to stand in the presence of God.. If you want the release of your spirit, stand before God as nothing.. Deny any knowledge or wisdom you have.. deny your intelligence and experience.. Stand in God's presence as an ignorant person who knows nothing.. But I do not mean that you feign ignorance or pretend this because God cannot be deceived and does not like those who pretend..

What I mean is to be convinced-in every matter-that your self must be concealed so that the Lord Jesus Christ may appear, not only before people, but also before yourself.. Say to Him, 'O Lord, I judge according to the appearances.. I am weak and cannot resist the devils.. The results of any work are in Your hand.."  Ask God to intervene and guide you, or to dwell in you and work through you.. Then, when the required thing is performed, thank God because it is He who did it not you.. And when people come to praise you do not boast or pretend to be humble but seize the opportunity and chant to them the psalm which says, "If it had not been the Lord who was on our side, let Israel now say-If it had not been the Lord who was on our side, when men rose up against us, then they would have swallowed us alive... Then the waters would have overwhelmed us, the stream would have gone over our soul."  (Ps. 124: 1-4)

When you are fought with a certain sin, do not trust your power nor depend on your past triumph because sin, "..has cast down many wounded, and all who were slain by her were strong men." (Prov. 7:26).. But, be sure that victory is the Lord's and if He does forsake you in the slightest sins, you will be like the people of Sodom.. Chant then that beautiful psalm which says, " .. You knew my path. In the way in which I walk they have secretly set a snare for me. Look on my right hand and see, for there is no one who acknowledges me. Refuge has failed me; no one cares for my soul.. I cried out to You, O Lord: I said, 'You are my refuge, My portion in the land of the living... Deliver me from my persecutors, for they are stronger than I... (Ps. 142: 3-6)

My beloved brother, you are nothing, and you have to admit this before God and before yourself.. Whenever you think that you are able to do something, come to your self and say: "Who am I that I should go to Pharaoh, and that I should bring the children of Israel out of Egypt? " (Ex. 3:11)

However, if God convinces you that He will be your mouth and will speak through your tongue and that you will be just an instrument, then proceed on your way. Though you walk through the valley of the shadow of death, you will fear no evil; and though an army encamps against you, you will be confident in this.. At such time remember me, the unclean dust, so that we may meet together.. there..