5 - GREATER THAN HEAVEN AND EARTH - By H.H. Pope Shenouda III 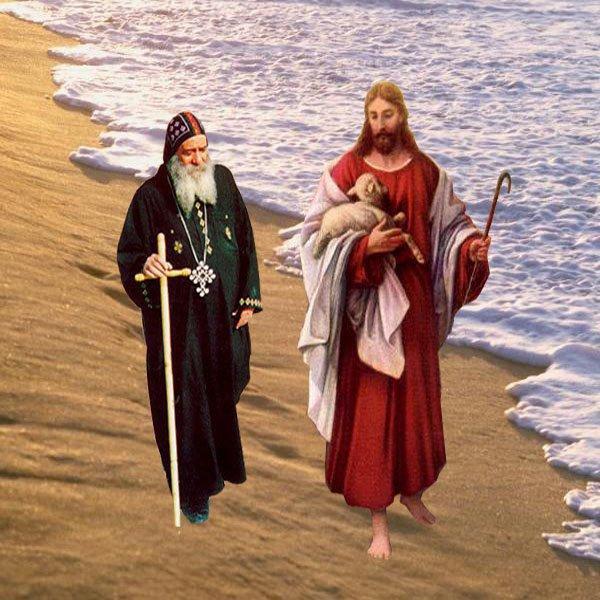 5 - GREATER THAN HEAVEN AND EARTH
By H.H. Pope Shenouda III


5 - GREATER THAN HEAVEN AND EARTH

This time I was not walking in the desert or sitting at the door of the monastery, I was with my father the monk in front of his cell in the mount to continue our previous talk concerning He who is greater than heaven and earth.

My beloved brother, a spirit which desires to be released, knows well its own worth.  It knows how magnificently great it is and how much greater it is than to be humiliated by the flesh, the environment or by the devils.

God's beloved, to have an idea about this matter, we have to examine it together.  We have to also remember the past, the present and the future in order to  recognize what a hidden power we have which we are not aware of.  We have to remember that man is the only being created in God's image and likeness (Gen. 1:27).  So when you are asked to introduce yourself, say, firmly and confidently, 'I am the image of God'.

Being the image of God, you are immortal and not liable to perish at all.  For is it possible that a person created after the likeness of God, the Immortal, would perish?!

See then how great you are than the high mountain, the great sea, the blazing sun and the shining moon.  You are greater than the wide desert and the spacious plain, and even greater than the atom which destroys and all the power of  nature.  All these things pass away as the Holy Bible says, "Heaven and earth will pass away.. ", but you will not, for the Lord Jesus Christ promised you an eternal life (John. 4:14) You, the image of God...

You are the king (ruler) of the earth and all that is in it:

You, my great brother, are the only divine creature who, of all the earth and what is beneath or on it, are given by God the gift of intellect and utterance given to angels.  You are the creature who is given the ability to know God and worship Him and whom God is pleased with... The nature which you sometimes think greater than you, is only made by God to serve you.  You can subjugate everything in it according to your will and your power..

Therefore God first created everything then last of all He created you to dominate over all the other creation...' to dominate over the fowl of the air, the fish of the sea and over the cattle and all that is on the earth '(Gen. 1:26,28).  Do you see how you ought to rule over everything though you think yourself weak and fear the hawk, the whale, the lion and other beasts which are in fact your weak servants that served you before?..

Do not think that you had this before the first sin only, for the righteous in every age has this dignity and authority.  Let us examine some examples from the Old Testament: Samson tore apart the lion with his hand and killed it; Daniel was in the lions' den and they did him no harm; Jonah was swallowed by the fish but it vomited him without daring to injure him, and the three lads were in the fire furnace but the fire became for them cold and peaceful.   The same can be found in the New Testament: St. Mark and his lion is one example.  Another example is St. Paul who the viper came out because of the heat and fastened on his hand, but he shook it off into the fire and felt no harm; so the people were amazed and said he was a god (Acts 28:3-7).  You also are given the power to trod the serpents and the scorpions and every power of the enemy (The Prayer of Thanksgiving).

Oh, my beloved brother, would you know the value of your soul which you imprison because of your sin in a prison of humility, cowardice and fear!  It peeps from behind the bars of your prison looking for its past glory and wishing to be set free if you do allow it.

You are the divine creature:

You, Valiant, are a divine creature whom God the Son addressed saying, "Abide in Me, and I in you.  As the branch cannot bear fruit of itself unless it abides in the vine." (John. 15:4).  You, at whose door God knocks wishing you to open for Him so He may enter and dine with you and you with Him and makes His home with you.  (Rev 3,20; John. 14:23)

You are required to strive to be like God for the Lord of glory says: "Therefore you shall be perfect just as your Father in heaven is perfect." (Matt. 5:48).  You are the person whom God is delighted to call His son, though He did not will to call the angels or archangels His sons.  He called you alone, you, the divine creature.

You are the person whom the Lord poured water and washed his feet and wiped them with the towel with which He was girded.

You, whom the angels desire to be like.. and who alone partake of the holy flesh and blood of the Lord.. whom the Lord wished to be one with Him and with the Father. (John. 17:21)

You are whom the angels minister to:

"The angel of the Lord encamps all around those who fear Him and delivers them." (Ps. 34:7)

Did you not see, my beloved brother, how the Lord sent two angels to save Lot from Sodom!  How He sent His angel and closed the mouths of the lions for Daniel!  How Elisha was aware of that and said to his servant, "Do not fear, for those who are with us are more than those who are with them... And Elisha prayed... Then the Lord opened the eyes of the young man and he saw.  And behold, the mountain was full of horses and chariots of fire." (2 Kin 6: 15-17).  How also the angel of the Lord brought food to Elijah while he was sleeping under a broom tree, so he arose, and ate and drank; and he went in the strength of that food forty days and forty nights.
(1 Kin 19:5-9)   And how the angel of the Lord carried Hebbekuk to give food to Daniel in the den. (Dan 14:35-38)

The time is lacking to tell you, the Lord's beloved, about the ministry of the angels to you and your brethren, their concern about you and their intercession for you.  Truly, you are an important creature...

You Who Are Called A god:

Whatever the meaning is of these two verses, they certainly show your greatness in the sight of God…

You Have The Power To Bind And Loose In Heaven:

If you are reasonably exalted because the Lord Jesus Christ ascended to the Father to prepare for you a place  in heaven and will come again to take you, "Come, you blessed of My Father, inherit the Kingdom prepared for you from the foundation of the world"  (Matt. 25:34), would you not rather be exalted because He gives you the keys of the Kingdom!  For the Lord said, "Whatever you bind on earth will be bound in heaven, and whatever you loose on earth will be loosed in heaven." (Matt. 18:18)   Moreover, He gives you the authority to forgive or not.  {This authority of course is given to the priests. But the priest is a man and this article speaks about man as a human being whatever his role may be and whatever generation he may belong to.}

All this is given to you, who are in the image and likeness of God and whose form the Lord took when He came in a flesh like yours . Though His divine nature never departed His human nature even for a second or a twinkle of the eye.

You Are God's Friend:

Remember how God - in His supreme wisdom - before destroying Sodom, revealed His will to His friend Abraham, "Shall I hide from Abraham what I am doing, since Abraham shall surely become a great and mighty nation and all the nations of the earth shall be blessed in him? “(Gen 18:17,18)   He even let Abraham argue the matter with Him blaming Him with familiarity and liberty saying, -"Would You also destroy the righteous with the wicked?... Far be it from You to do such a thing as this... far be it from You!  Shall not the Judge of all the earth do right?" (Gen. 18:23-26)

It is indeed familiarity and not mere words from a servant to his master or from a creature to the Creator.. They are words of a person who is sure of his worth in the sight of his friend..

Moses also did the same thing while talking with God concerning his people because God wanted to destroy them, he said: "Yet now, if You will forgive their sin-but if not I pray, blot me out of Your book which You have written" (Ex.32:33)... Certainly, this is familiarity and friendship!!

Now, brother, have you recognized the value of your soul and its greatness in the eyes of God?  Would you let a deceitful devil play with your dignity though God has' given you the power over all the devils? I do not think you do..


The Release of The Spirit
By H.H. Pope Shenouda III