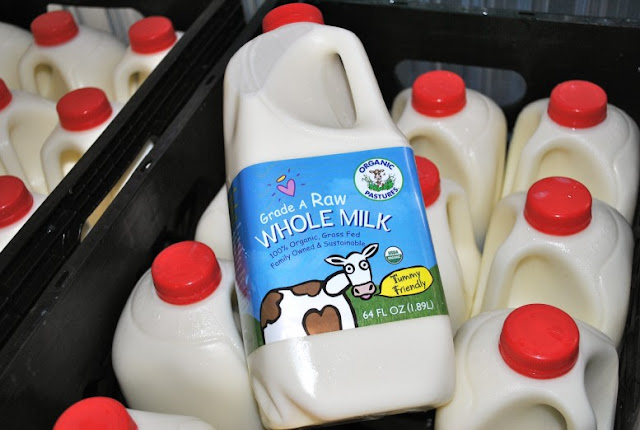 A young man had been to Wednesday Night Bible Study.

The Pastor had shared about listening to God and obeying the Lord's voice.
The young man couldn't help but wonder, 'Does God still speak to people?' After service, he went out with some friends for coffee and pie and they discussed the message. Several different ones talked about how God had led them in different ways.

It was about ten o'clock when the young man started driving home. Sitting in his car, he just began to pray, 'God...If you still speak to people, speak to me.  I will listen.  I will do my best to obey.'
As he drove down the main street of his town, he had the strangest thought to stop and buy a gallon of milk. He shook his head and said out loud, 'God is that you?'  He didn't get a reply and started on toward home. But again, the thought, buy a gallon of milk.
The young man thought about Samuel and how he didn't recognize the voice of God, and how little Samuel ran to Eli.

'Okay, God, in case that is you, I will buy the milk.'  It didn't seem like too hard a test of obedience. He could always use the milk. He stopped and purchased the gallon of milk and started off toward home.  As he passed Seventh Street , he again felt the urge, 'Turn Down that street.'
This is crazy he thought, and drove on past the intersection.


Again, he felt that he should turn down Seventh Street.  At the next intersection, he turned back and headed down Seventh. Half jokingly, he said out loud, 'Okay, God, I will.'


He drove several blocks, when suddenly, he felt like he should stop. He pulled over to the curb and looked around.  He was in a semi- commercial area of town.  It wasn't the best but it wasn't the worst of neighborhoods either. The businesses were closed and most of the houses looked dark like the people were already in bed.


Again, he sensed something, 'Go and give the milk to the people in the house across the street..' The young man looked at the house. It was dark and it looked like the people were either gone or they were already asleep. He started to open the door and then sat back in the car seat.


'Lord, this is insane. Those people are asleep and if I wake them up, they are going
to be mad and I will look stupid.' Again, he felt like he should go and give the milk..


Finally, he opened the door, 'Okay God, if this is you, I will go to the door and I will give them the milk. If you want me to look like a crazy person, okay. I want to be obedient. I guess that will count for something, but if they don't answer right away, I am out of here.'


He walked across the street and rang the bell. He could hear some noise inside. A man's voice yelled out, 'Who is it? What do you want?' Then the door opened before the young man could get away.


The man was standing there in his jeans and T-shirt. He looked like he just got out of bed.. He had a strange look on his face and he didn't seem too happy to have some stranger standing on his doorstep.. 'What is it?'


The young man thrust out the gallon of milk, 'Here, I brought this to you.' The man took the milk and rushed down a hallway. Then from down the hall came a woman carrying the milk toward the kitchen. The man was following her holding a baby. The baby was crying. The man had tears streaming down his face.


The man began speaking and half crying, 'We were just praying. We had some big bills this month and we ran out of money. We didn't have any milk for our baby. I was just praying and asking God to show me how to get some milk.'  His wife in the kitchen yelled out, 'I ask him to send an Angel with some. Are you an Angel?'


The young man reached into his wallet and pulled out all the money he had on him and put in the man's hand. He turned and walked back toward his car and the tears were streaming down his face.


This is so true. Sometimes it's the simplest things that God asks us to do that cause us, if we are obedient to what He's asking, to be able to hear His voice more clear than ever. Please listen, and obey! It will bless you (and the world).

I can do all things through Christ who strengthens me.  Phil 4:13

"Have faith in God."


Faith makes ANYTHING possible. Always trust in the Lord.

Email ThisBlogThis!Share to TwitterShare to FacebookShare to Pinterest
Labels: Answer God's Call, Caring, Faith, Giving, God's Voice, Hear His Word, Humble, I Can Do Anything, Listen, Meekness, Obedience, Obey, Put Others Before You, Reach Out, Serve Others, Serving, Trust, Trust In The Lord