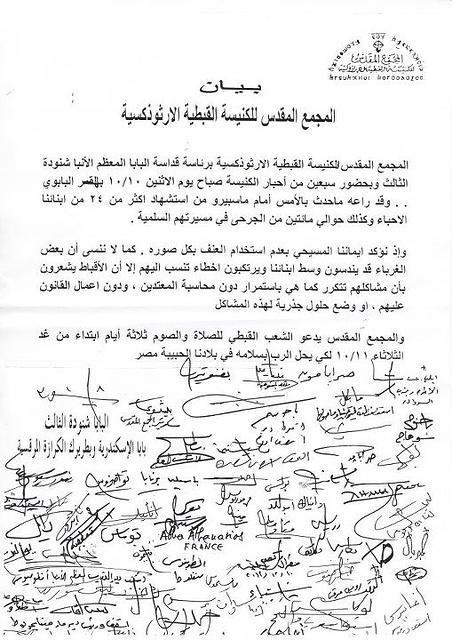 The Holy Synod of the Coptic Orthodox Church under the leadership of Pope Shenouda III met with seventy in attendance on Monday October 10, 2011 in the Papal residence in Cairo, Egypt to discuss the events of the prior day in front of Maspiro where at least 24 of our beloved children have been killed and at least 200 have been injured. We ascertain that our Christian faith doesn't allow us to use violence of any kind. But we also know that strangers implanted themselves among our children and committed acts that are more suited to their morals. Coptic Christians feel that their problems are always being repeated without accountability and without the due justice of the law. The Holy Synod invites all Coptic Christians to fast and pray for three days beginning Tuesday October 12, 2011 that God may bring his peace to our beloved country of Egypt.

Posted by Coptic Orthodox at 2:10 AM