The credibility of the Arab Spring took a bloody hit on Sunday, Oct. 9, when Egyptian army forces shot dead more than 30 Christian Copts and wounded scores of them. In addition, the action by the army was paralleled by armed men, described as Salafi jihadists by Coptic sources, seen also shooting and hitting demonstrators with knives.

Having happened a few weeks from the legislative elections in Egypt, this violence impacts the debate about the Spring of Egypt but also challenges U.S. and European policies toward the current and perhaps the forthcoming government.

Can the West support — and fund — a regime that kills members of the weakest community in Egypt, months after the fall of Mubarak?

International news agencies, including The Associated Press, were late in reporting the real casualties, as Coptic sources have identified more than 30 bodies seen on the streets at the time this article was filed (40 by the latest unconfirmed account).

Hundreds of demonstrators who were protesting against the attacks on Christian churches in the south of the country were also wounded and dozens were taken to the hospitals.

According to Coptic non-governmental organizations (NGOs) and Egyptian observers, the demonstrators were marching peacefully toward the TV central building when armored vehicles from the Egyptian military deployed in the streets, and soldiers fired against the unarmed civilians. A number of demonstrators, mostly youth, burned a few military vehicles after the shootings.

The army was not alone in its suppression of the demonstrations. On the sides of the streets, bands of thugs were seen striking at the marchers with sticks and blades. In some instances, according to Coptic NGOs, armed elements described as Salafists or jihadists shot also against the civilians.

It will take a few days before arriving at an accurate number of how many were killed in the Cairo massacre, but what is clear after today is that the Copts of Egypt, about 15 million of them, are now under siege.

Persecuted historically for centuries, they have been subjected to pressures since the mid-1950s without interruption. Their churches were bombed and torched at the end of last year and even after the revolution crumbled Mubarak's regime.

It sounds as if the Arab Spring is ignoring the weakest communities in the Arab world.

Over the past few months, Copts, secular, and liberal Egyptians were outmaneuvered by the well-organized and well-funded Muslim Brotherhood and their Salafi allies. 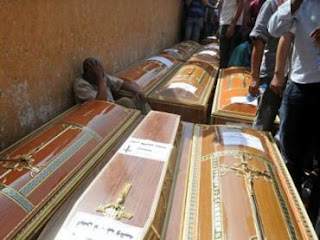 Instead of recognizing the identity of minorities in their constitution's preamble, the Ikhwan (Brotherhood) rushed the process with the support of the ruling military council, ignoring the rights of the Copts, and set the path to so-called fast elections, ensuring an Islamist political blitzkrieg.

In addition, the jihadists, emboldened by the Muslim Brotherhood expanding influence in the country versus the seculars and civil society forces, resumed their violence against the Copts and their churches.

Ironically, the military authorities and the government they've appointed are claiming that "an outside conspiracy against the state is behind the events." Hints such as these usually mean either Israel or even the United States.

Cairo's present regime, which has sidelined the initial forces of the revolution — youth, women, liberals, and Christian Copts — doesn't want to recognize that there is a Coptic problem in Egypt. The latter would ruin the chances for the Muslim Brotherhood to seize power with international recognition but also open the files of international support to Egypt and its militaries.

The INGO Coptic Solidarity International’s leaders said "these were direct attacks against the liberty of expression of the Christian Copts in Egypt and this is unacceptable after Mubarak's fall." The Coptic INGO officials said "Egypt's spring is in the balance as the army and Islamists are killing Copts in the streets of Cairo."

Coptic activists in Egypt, as the events were taking place, expressed their frustration that the "regime, now heavily influenced by the Muslim Brotherhood, is rapidly becoming authoritarian but only against the Copts and the seculars."

In a sense this is the most dangerous event in Egypt since the fall of Mubarak, as developments are showing that the government's institutions are turning away from the liberties they've promised. It is to be expected that the U.S. Congress and the European Parliament will request and receive reports on these killings, and then have to deal with all the effects this could have on the administration's policy in Egypt.

Indeed, over the past few months, Washington has been engaging with Muslim Brotherhood representatives and preparing U.S. public opinion to accept the idea of an Islamist government in Egypt after the "rushed elections." President Barack Obama mentioned the Copts in his famous Cairo speech but the Copts are nowhere to be seen in the policies of his administration.

It looks like the administration has settled for an Egypt shared between the military and the Islamists, while civil society, bloggers, youth, and Copts will fall to a second-class citizens’ category.

But things won't be that easy and may not go as Muslim Brotherhood planners, both in Egypt and in the West, wish. Because a younger generation of Copts, there at the onset of the Egyptian Spring and, along with the solidarity of a liberal Muslim youth, this younger generation may fight for the achievements of the early Spring, refusing the military Islamists’ deal.

Shooting Coptic demonstrators on the streets of Cairo at the hands of the military who receive billions from the U.S. taxpayers will not go unnoticed. The future is open to many possibilities, "but they are all bleak" as Essam Iskandar told me.

Eskandar, a member of the revolutionary council during the uprising earlier in the year, fears the Copts and the liberals are caught between two nightmares: "either a new military order, read dictatorship, or an Islamist regime." The Arab Spring of Egypt seems falling on the heads of the Copts.

Dr. Walid Phares is the author of "The Confrontation: Winning the War Against Future Jihad," and "The Coming Revolution: Struggle for Freedom in the Middle East." He advises members of Congress and the European parliament. www.walidphares.com

Posted by Coptic Orthodox at 9:24 PM