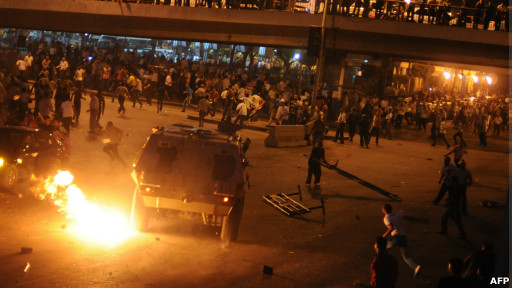 At least 24 people have been killed and more than 200 wounded in the worst violence since Egypt's former President Hosni Mubarak was ousted in February.

Clashes broke out after a protest in Cairo against an attack on a church in Aswan province last week which Coptic Christians blame on Muslim radicals.

A curfew is in force. The cabinet is to hold an emergency meeting on Monday.

Sectarian tensions have increased in recent months in Egypt.

The Copts - who make up about 10% of the population - accuse the governing military council of being too lenient on the perpetrators of a string of anti-Christian attacks.

Prime Minister Essam Sharaf appealed to Egyptians not to give in to sectarian strife.

"What is taking place are not clashes between Muslims and Christians but attempts to provoke chaos and dissent," he said on his Facebook page.

Thousands - mainly but not exclusively Christians - joined the initial march from the Shubra district of northern Cairo to the state TV building in Maspero Square where they intended to hold a sit-in.

They were calling on the military council to sack the governor of Aswan province. They also accused state TV of fanning the flames of anti-Christian agitation.

But the demonstrators said they were assaulted by attackers in plain clothes before the clashes with the security forces broke out.

The clashes began outside the state TV building but soon spread to Tahrir Square, the epicentre of the demonstrations which led to President Mubarak's resignation.

Thousands joined in the street violence, hurling stones and tearing up the pavement for ammunition.

Eyewitness Nigel Hetherington says troops fired rubber bullets and teargas into crowds. "I saw civilians running past my window as troops fired wildly into the crowds," he told the BBC.

The ministry of health said that at least 24 people had died killed and 212 had been wounded in the violence.

Of this number, 107 were civilians and 86 were security forces, ministry spokesman Hisham Shiha told the BBC.
Simmering tensions

Protesters also called for the resignation of the military council, in particular its chairman, Field Marshal Mohamed Tantawi.

The BBC's Yolande Knell in Cairo says sectarian tensions have simmered in the political and security vacuum that has developed in the past couple of months.

As well as the clashes between police and protesters, other groups of thugs were also involved, our correspondent says - part of the pattern of sectarian violence in Egypt.

Christians have been worried by the increasing show of strength by ultra-conservative Islamists.

In May, 12 people died in attacks on Coptic churches. In March, 13 people were killed in clashes between Muslims and Copts in Tahrir Square.

This latest violence comes ahead of parliamentary elections scheduled for 28 November, the first such vote since President Mubarak stepped down.

The Copts, the largest minority in Egypt, complain of discrimination, including a law requiring presidential permission for churches to be built. Egypt only recognises conversions from Christianity to Islam, not the other way.

Posted by Coptic Orthodox at 4:42 AM