Man In Belly of A Wale 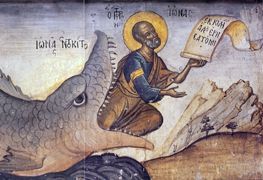 Let us consider whether is harder, for a man after having been buried to rise again from the earth, or for a man in the belly of a whale, having come into the great heat of a living creature, to escape corruption. For what man knows not, that the heat of the belly is so great, that even bones which have been swallowed moulder away? How then did Jonah, who was three days and three nights in the whale’s belly, escape corruption?

And, seeing that the nature of all men is such that we cannot live without breathing, as we do, in air, how did he live without a breath of this air for three days? But the Jews make answer and say, The power of God descended with Jonah when he was tossed about in hell.

Does then the Lord grant life to His own servant, by sending His power with him, and can He not grant it to Himself as well? If that is credible, this is credible also; if this is incredible, that also is incredible. For to me both are alike worthy of credence.

I believe that Jonah was preserved, for all things are possible with God (Matthew 19:26); I believe that Christ also was raised from the dead; for I have many testimonies of this, both from the Divine Scriptures, and from the operative power even at this day of Him who arose—who descended into hell alone, but ascended thence with a great company; for He went down to death, and many bodies of the saints which slept arose (Matthew 27:52) through Him.