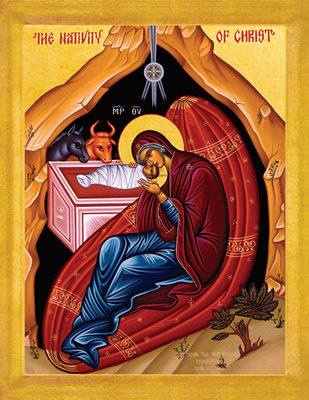 It was fitting that the Giver of all holiness should enter this world by a pure and holy birth. For He it is that of old formed Adam from the virgin earth, and from Adam without help of woman formed woman. For as without woman Adam produced woman, so did the Virgin without man this day bring forth a man. For it is a man, saith the Lord, and who shall know him (Jer. 17:9). For since the race of women owed to men a debt, as from Adam without woman woman came, therefore without man the Virgin this day brought forth, and on behalf of Eve repaid the debt to man.

That Adam might not take pride, that he without woman had engendered woman, a Woman without man has begotten man; so that by the similarity of the mystery is proved the similarity in nature. For as before the Almighty took a rib from Adam, and by that Adam was not made less; so in the Virgin He formed a living temple, and the holy virginity remained unchanged. Sound and unharmed Adam remained even after the deprivation of a rib; unstained the Virgin though a Child was born of her.
St. John Chrysostom