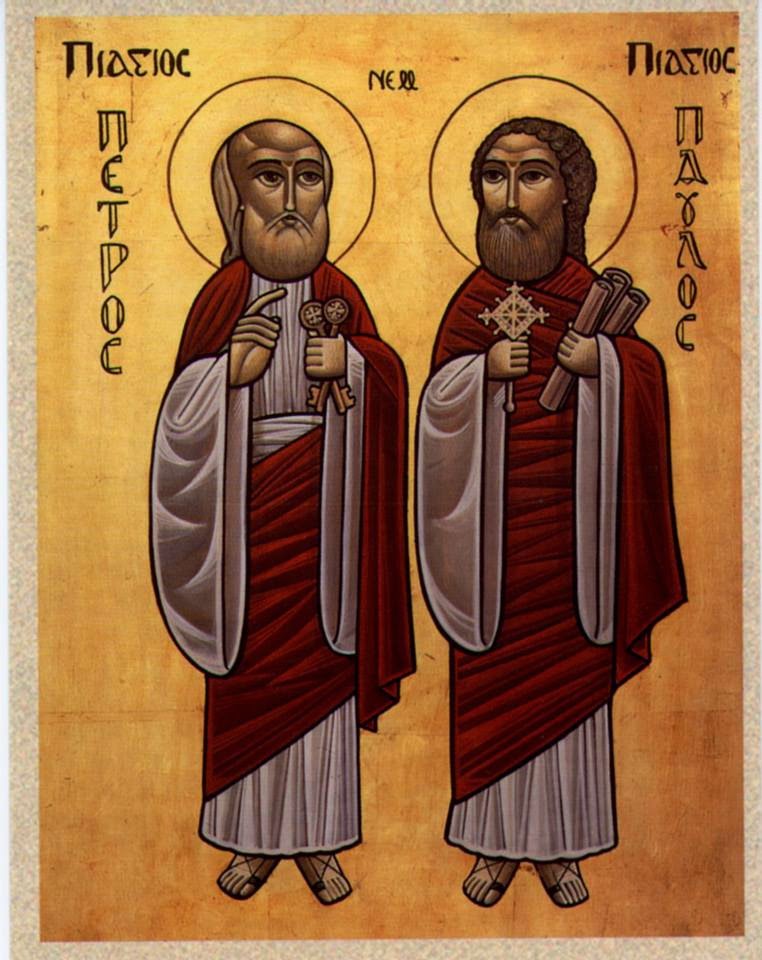 But you shall receive power when the Holy Spirit has come upon you;
and you shall be witnesses to Me in Jerusalem,
and in all Judea and Samaria, and to the end of the earth.
Acts 1:8


The Church celebrates the memory of the martyrdom of St. Peter and St. Paul on the 5th of Abib, which is the 12th of July. This feast is called in our Church by the name of "the Feast of the Apostles." Its date is unchanged in every year.
The Church venerates these two apostles very profoundly; and raises them and honors them exceedingly; especially in the prayer of the partition" or "the division" which pertains to the fast of the apostles and to the feast of the apostles, which we pray during the holy mass.

These two saints represent two distinguished kinds as regards the personality, the mission, and the style. Each one of them has distinct characteristics.

THE POINTS OF DIFFERENCE

Peter was among the first whom the Lord had chosen to work with Him.  (Matthew 10)

And Paul was not among the twelve, and not even among the seventy apostles, but the Lord chose him lastly, after the resurrection and years after the choice of Matthias......

He did not follow Christ during His predication on earth. He rather said about that: "Then last of all He was seen by me also, as by one born out of due time. For I am the least of the apostles, who am not worthy to be called an apostle, because I persecuted the church of God."
(1 Cor. 15: 8 -9)

And although he was the last in his call, yet he "labored more abundantly than they all." (1 Cor. 15:10)  That shows that it is not a matter of precedence, but according to the amount of weariness from exertion for God.

A person may not be the most ancient among the workers in ministry, and nevertheless he may be the strongest of all the workers.
John the Baptist was not the first prophet in the Old Testament, but he was the last of them in their chronological order. Nevertheless it was said that "among those born of women there has not risen one greater than John the Baptist." (Matt. 11:11)

The apostle Peter was a married man. It was mentioned in the Gospel that Christ healed his step-mother from fever. (Matt. 8: 14-15)  In his journeys for the predication, he wandered accompanied by his wife as a sister. (1 Cor. 9:5)

But the apostle Paul was a virgin. (1 Cor. 7:7). He called for the preference of virginity. "But each one has his own gift from God", "as the Lord has called each one...... Let each one remain in the same calling in which he was called" (1 Cor. 7: 7,17,20). That proves that the Lord calls everybody to His service, whether they are married like Peter, or virgins like Paul.

Peter began his life with the Lord Christ with love, confidence, and faith. But on the contrary:
Paul began by enmity, as a persecutor of the Church and of everyone who followed Christ, so that the Lord, when He met him on the road to Damascus, began his conversation with him by reprimanding him saying: "Saul, Saul, why are you persecuting Me?" (Acts 9:4) Saint Peter was a simple man, a fisherman (Matt. 4:18). He was ignorant and was not instructed into culture or science. He is one of whom "God has chosen the foolish things of the world to put to shame the wise" (1 Cor. 27). It was said of him, of him and saint John, "that they were uneducated and untrained men." (Acts 4:13) But saint Paul was one of the learned of his age, who was educated at the University of Tarsus, and brought up at the feet of Gamaliel. (Acts 22:3)  He was well-known for his culture and for reading many books. (Acts 26:24)

That shows us that the Lord equally employs everybody for His kingdom, the learned and the simple. The important thing for them is to be useful utensils for the work of His grace

The Church Rite: The Lakan

Lakan is a Syrian word means basin, and it is the pot of marble or stone placed in the third Khurs of the church where the priests pray on the water to make it a force for healing and Beatification ...

The Mass of Lakan has been Instituted to remember the baptism of Jesus and to exercise of the virtue of humility as bending to wash the feet of His disciples in the holy Thursday as well as to practice the meaning of service.

The mass of the Lakan is prayed three times per year: Epiphany – The Holy Thursday – The Feast of Apostles