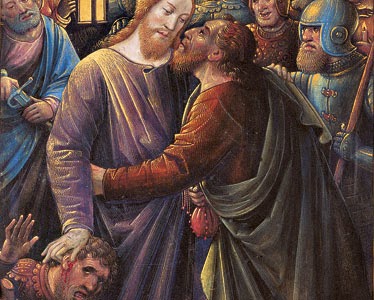 Then Satan entered Judas, surnamed Iscariot, who was numbered among the twelve.
So he went his way and conferred with the chief priests and captains,
how he might betray Him to them.
And they were glad, and agreed to give him money.
So he promised and sought opportunity to betray Him to them in the absence of the multitude.

What was this many-headed serpent's invention? it says, "He entered Judas Iscariot, who was one of the Twelve."

Why did he not rather enter blessed Peter, James, John, or some other of the rest of the apostles? Why Judas Iscariot? What did Satan find in him? Satan could not approach any of those we have mentioned here, because their heart was steadfast and their love to Christ immovable.

There was a place for satan in the traitor. The bitter disease of greed, which the blessed Paul says is the root of all evil, had overpowered him. Satan is crafty in working evil. Whenever he gains possession of anyone's soul, he does not attack him by means of general vice. He rather searches for that particular passion that has power over him and by its means makes him his prey.