St. George The Prince of Martyrs 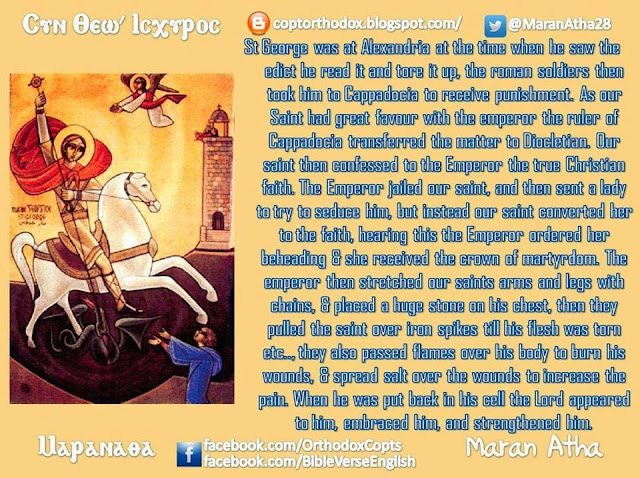 St. George was born about 280 A.D. of a Christian family that was wealthy and of noble origin, in the city of Capadocia, a city of the Eastern Empire, in Asia Minor.

He followed the usual career of young nobleman and joined the Roman army, where his ability and charm brought him quick promotion. The Emperor heard about him and as a result made him a tribune or an officer in the Imperial Guard.

One story says that he was a friend of Constantine another officer, who later became the first Christian emperor. The legend says that St. George came with Constantine to Britain and visited some holy places as Glastonbury and Caerleon. On his return to Nicomedia, the capital of the Eastern Empire where Diocletian settled, he met the fierce storm of persecution.

Diocletian gave orders for the issue of a formal edict against the Christians on February 23, in the year 303 A.D., being the feast of Termhlalia.

The provisions of this edict which was published on the next day in the market place, were as follows: "All churches should be levelled to the ground. All sacred books to be burned. All Christians who hold any honorable rank are not only to be degraded, but to be deprived of civil rights. Also, All Christians who are not officials are to be reduced to slavery".

In great courage, the young man George, pushed his way through the market place to read the proclamation, and then in front of the awe-stricken crown, he deliberately tore down the Imperial edict and threw it away. Consequently he was arrested and brought to the presence of Diocletian.

Some historians believe that St. George was not the young man who tore the proclamation, but as the edict was proclaimed and the great church in Nicomedia was ransacked and destroyed by the pretorian guard, he liberated his slaves, distributed all his wealth to the poor and prepared himself for martyrdom. he entered Diocletian's palace and rebuked him for his behaviour against the Christians.

The Emperor tried to seduce him by promises that he would be granted a higher position in the Empire. But as these promises failed to attract him, the Emperor began to threaten him with unbearable tortures that he will inflict on him. Lastly he put him in prison.

Diocletian knew that nothing, except sin, could destroy the strength, and demolish the integrity of this Saint. Thus he arranged for a very beautiful woman to spend the night with him in prison and try to debauch him. St. George who could only look forward to heavenly joy, began to pray and within a short while he managed to swing her heart to the christian faith. Soon she seriously began to inquire about salvation, and by the morning she declared that she found her true Bridegroom Jesus Christ. With great courage she announced her Christianity to the emperor and his men, and joined the other saintly martyrs.

His body was torn by a special instrument that had metallic teeth, and our Lord Jesus rose him, after his death and many pagans were converted. He was put in an active lime, and thill water was poured on it. Again the Lord returned him back to life. The emperor became very agitated, imagining that the Saint was using magic. He called his top magician, Athanasius and requested him to prepare a lethal poison to kill St. George. The Saint signed over the cup with the sign of the cross before drinking it, of course no harm came to him. The Emperor's councillors informed him that St. George's magic was in fact contained in the sign of the Cross itself. Another cup was also given to the Saint, but this time with his hands tied behind his back. The Saint signed it by his head saying: "shall I drink it from here or here or here or here!!!"

During all these tortures, although the Saint had enough pain and suffering of his own, but nevertheless kept on talking to Diocletian about the powers of the Christian faith. At the end the Emperor asked him if he could raise a dead man he knew of. St. George prayed to our Lord and the dead man came back to life. The result of that was the conversion of both the dead man and the magician as well as many others. They all were martyred.

IN THE EMPEROR'S PALACE

When all methods failed to incite St. George, the Emperor invited him in his palace to entertain him. He offered him an appointment as a prince if he only sacrificed once to the idols. The Saint replied "Tomorrow you will see the powers of your gods"

At the palace, St. George met Empress Alexandra, who had a fair idea about the Saint's God. She spoke with him, but the conversation quickly changed its course and the Saint began to preach to her about Jesus Christ, the Saviour of the world.

On the following day many people went to the temple to witness St. George's sacrifice to the idols. The Saint stretched his hands, raised his eyes to Heaven.. and in a moment, the idols collapsed and fell to the ground!!. The crowds shouted "we believe in George's God" At this, the Emperor and his men put an end to the lives of the new Christians, St. George, and Empress Alexandra in 23 Baramouda, 303 A.D.

St. George was buried in his mother's home that was situated on the seashore at Lydda, in Palestine. Before long his fame was spread all over the world. King Constantine, who took over after Diocletian, considered that St. George was the true model of the young christian man, and ordered a church to be built over his grave. In Egypt, the Copts call him, "The Prince of Martyrs", and built over 200 churches named after him. Moreover he is a personal friend of the majority of the Copts, who believe in the power of his prayers for them. The Greeks call him "the Great Martyr".

HIS FIGHT WITH THE DRAGON

Legends grew up about this Saint, but the most famous one is about his fight with the dragon, which was documented in a book called "the Golden legend" by James de Voragine, a bishop of Genoa. It happened when St. George was once stationed with the Roman army near Salone in Libya, North Africa. In that area a Dragon which was described as a huge crocodile with scaled wings, had eaten so many of the country folks around Salone that the remaining lot fled to the town and took shelter behind its walls. There, the dragon was positioned outside the city gates, and nobody could get in or out. Moreover its poisonous breath was so lethal that as it snored over the city wall, people could actually drop dead in the nearby area. In order to keep the beast away from the walls, two sheep were tethered every day, some distance away. The system worked fine until they ran out of sheep and the miserable people could not think of any other alternative but to sacrifice one child everyday.

One day the lot fell on the king's daughter, Sabra, a girl of fourteen. sometimes called Cleodolinda. Dressed in her most splendid clothes, as for her wedding, the poor girl was taken outside the city walls. While she was waiting for the dragon, weeping, George the tribune came up mounting his white horse. On hearing the story he decided to put an end to that tragedy, and decided to kill the dragon.

"Fair girl" he said, "do not be afraid for I will save your life with the aid of my Lord Jesus Christ". When the dragon appeared George the hero got engaged with the wild beast in a great combat. Finally he managed to wound it with his lance so badly that it could fight no more. Now the two of them tied a rope around its neck, and dragged it to the town. There in the market place, George cut off its head in front of all the cheering habitants, and the people of the whole town were baptized and became Christians.