13 - BE RELEASED FROM THE INFLUENCE OF THE SENSES - By H.H. Pope Shenouda III 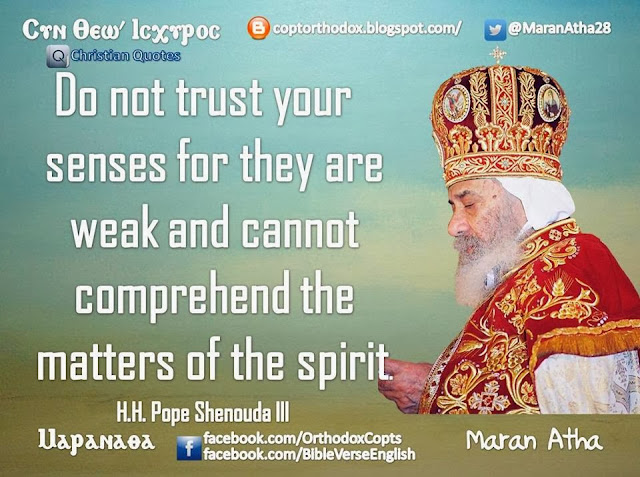 13 -  BE RELEASED FROM THE INFLUENCE OF THE SENSES
By H.H. Pope Shenouda III

13 - BE RELEASED FROM THE INFLUENCE
OF THE SENSES

You trust your five senses to a far extent and if your spirit opposes these senses, you reject your spirit.. When will you be freed from the influence of your senses and attain the release of the spirit..

You look here and there and when you find no one to see or witness you, you commit the fault which you avoid to commit in the sight of others.. But do you think that really no one sees you! There are certain eyes which look on you in compassion and censure.. You do not see those eyes because you still live in the body... It is God who observes you and you do not see Him.. If you are in the Spirit, released from those deficient senses, you will be able to say along with Elijah the Prophet, "As the Lord of hosts lives, before whom I stand... "  (1 Kings 18:15)

Whenever you are encompassed with dangers, you look to the right and to the left and seeing yourself alone, you become afraid and terrified... In fact God is at your right hand that you may not be shaken (Acts 2: 25). You do not see Him because your eyes cannot see everything, for they are material and cannot attain the spiritual matters.. I wish, dear brother, that you would release your spirit from the influence of such bodily senses.. This spirit of yours, to "..searches all things yes, the deep things of God" (1 Cor. 2:10). Let is soar freely to see God at your right hand and whisper joyfully, "... though I walk through the valley of the shadow of death, I will fear no evil; for You are with me." (Ps. 23:4)

The poor Gehazi, the servant of Elisha was very afraid seeing the great army of the enemy nearby and there was no hope whatever.. But Elisha who lived in the spirit was confident.. He saw with the spirit things which no eye could see and heard what no ears could hear.. He felt pity towards the young man and prayed to the Lord to open his eyes... "Then the Lord opened the eyes of the young man, and he saw. And behold, the mountain was full of horses and chariots of fire all around Elisha" (2 Kings 6:17).. So he was comforted..

Do not trust your senses for they are weak and cannot comprehend the matters of the spirit. The widow of Zarephath of Sidon, saw with her human eye only a handful of flour in the bin and a little oil in the jar.. She thought that was only sufficient to make a cake for her and her son that they might eat it and die... But Elijah, the man of God saw something else with his spirit.. he saw that neither the bin of flour nor the jar of oil would dry whatever she took from them.. This actually happened as we see in 1 Kings 17:14-16

Elisha was standing at the River Jordan. His bodily eyes saw a river were one would drown if one walked through .. But his spiritual eye was not confined to this vision.. He saw the Jordan as a ground fit for walking through. So, Elisha took the mantle of Elijah that had fallen from him while he went up in the chariot of fire and struck the water. The water was divided and Elisha crossed the river(2 Kin 2:14). The bodily eye would see the mantle of Elijah just as a mantle but Elisha saw it with the spirit as a great power given by God and not a mere garment.

My dear friend, your eyes are deficient even regarding material things.., for there are some substances which you cannot see.. Though they exist, they defy your weak eyes.. You may only see them through a microscope..

If there is not a microscope available, and you cannot see such tiny bodies with your naked eye, would you then deny their existence, merely because you do not see them? If this is the case regarding material things.. what would you say concerning spiritual matters?
With respect to spiritual matters, let your spirit guide you, and do not force it to submit to the body.. Let it soar freely and swim in a world of divine matters as it is said: "Blessed are those who have not seen and yet have believed" (John 20:29)

Certainly, my beloved brother, you have heard before of the visions in which the spirit swims in the world of the angels and saints and see things which no mortal can see.. In such cases, the spirit is released from the influence of the body and uses the members of the body merely for its spiritual purposes.. Hence, the senses yield to the spirit and not the spirit to the senses..

One day, someone told me that he had heard that St. George appeared in a certain church but he did not believe. He went to see by himself and to prove that it was only a false superstition and he went and saw nothing..

I do not want to make any comment concerning this story but I only present a point of view ie. such a person and others like him cannot see any visions because of their weak faith. They want to subjugate the spiritual matters to the senses of the body, while God reveals to the simple only the mysteries of His Kingdom.


The Release of The Spirit
By H.H. Pope Shenouda III