The Importance of The Passion Week 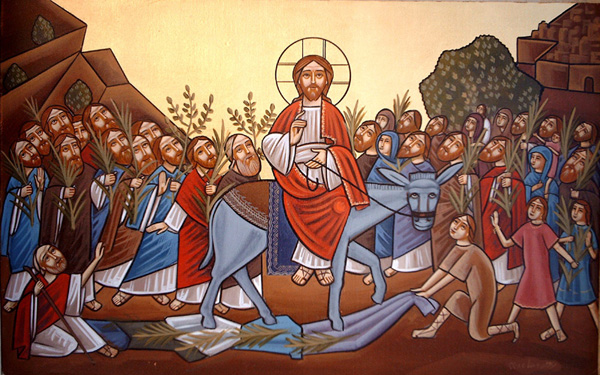 The Passion Week or the Holy Pascha (Passover) is the most important period in the year and the richest spiritually. It is a week full of Holy memories of the most crucial stage of salvation and the outstanding chapter in the story of redemption. The Church chose for this week certain readings from both the Old and the New Testaments, which reflect, the most passionate feelings that explain God's relation with Man. The Church also chose some deep hymns and spiritual contemplation to suit the occasion.

In the early Church, our Saintly Fathers used to receive this week with respect and reverence, and act in great humility.

While fasting, they abstained from eating any sweet food like honey or jam, as they considered it not appropriate to taste any sweet thing while commemorating the Lord's suffering for them. Some used not to cook anything during that week, as a matter of devotion, and lest cooking should distract them from worshiping. The majority of Christians used to eat nothing but bread and salt. Those who were physically capable abstained
from Friday night till Easter Sunday. As a sign of devotion during this week, women used not to put make up or wear jewellery. People devoted all their time for worshiping; they gathered in Churches for prayer and contemplation.

The Great Emperor Theodosius was one of the Christian Kings and Rulers who ordered all Government Houses and Business to cease work, to enable people to concentrate on worshiping. Prisoners were also allowed to go to Church and join in the ceremonies of this Great Week, hoping that it would help them to reform. Christian masters also used to relieve their slaves from work all the Pascha Week to enable them to worship the Lord like their masters, without any discrimination. So both masters and slaves were able to worship God and enjoy the effectiveness and depth of this week.

This prayer, is repeated ten times every day.; five during daytime and five at night, ie. during the following hours: First, Third, Sixth, Ninth and Eleventh.
In each of these prayers, we turn to our God and Savior in His passions and say, "we know who You are, for "Thine is the Power, Glory, Blessing and Honor, forever Amen."
With this prayer, we follow the Lord Christ step by step along the incidents of this week that preceded the crucifixion. What then are these incidents? And how does the Church act during this week?

How did The Suffering Start?

On Palm Sunday, the Lord Jesus Christ went to Jerusalem where He was gloriously received as a King: The people praised and cheered Him with palms, spreading their robes under His feet, and the whole city was in turmoil (Matt. 21:10). This annoyed the chief priests and the elders of the people: scribes, Pharisees and Sadducees.

They envied Him for the great love people felt for Him, so they started thinking of a way to get rid of Him! They were more upset when He entered the temple and expelled all who were buying and selling. They then asked Him, "By what authority are You doing these things?" (Matt.21:23). Since then they decided to kill Him, telling one another "Look, the world has gone after Him," (John. 12:19)

The chiefs' desire to kill the Lord Christ was due to their envy, but the puzzling thing is the change in the multitude's attitude; they received Him like a King, then shouted to Pilate, "Crucify Him, crucify Him! " (Luke. 23:21)

When the crowds cheered Jesus, they looked at Him as an earthly King, "Blessed is He who comes in the name of the LORD! Blessed is the kingdom of our father David" (Mark 11:9-10). But the Lord Jesus refused a Kingdom on earth, as His is a Heavenly Spiritual one. The plot to get rid of the
Nazarene was then a natural reaction from the Chiefs who lost hope in the long awaited kingdom!!

The church considers the end of Palm Sunday Mass the beginning of the Passion Week, as the plot to kill the Lord Jesus Christ started to develop since then.

During this week the Church's Icons, Pillars and Lectern and sometimes even the walls are all covered with black cloth, creating an atmosphere of mourning. It makes everyone feel that he is sharing in the Lord's sufferings, as said by St. Paul, "that I may know Him and the power of His Resurrection and the fellowship of His sufferings". (Phil. 3:10)

General Prayer For the Departed:

Through the Passion Week, the Church is preoccupied with the Lord's sufferings only, there is no raising of incense even for funerals, but replaced by the Pascha prayers and readings.

For this reason, a general prayer for the departed is held after Palm Sunday Mass, for the souls of those who pass away during the Holy Pascha. The priest prays on some water for this purpose, and not for blessing the palms as some may think.
During these prayers we have to confess our sins to the Lord in true repentance, as we never know when our life will end...
After this funeral mass and the dismissing of the congregation, prayers are carried forth outside the camp.
Outside the Camp:
Under the Law of the Old Testament, sin offering was to be burnt outside the camp (Lev. 4:12,21), so it would not. defile the camp with the congregation's sins.
Thus the Lord Christ who took away the sins of the whole world, suffered outside the Holy City. They considered Him a sinner, sent Him outside the Camp and crucified Him. St. Paul explained, and referred to this matter by saying:
"Let us go forth therefore to Him outside the camp, bearing His reproach." (Heb. 13:13)

The Holy Church follows the Lord's steps during the Pascha Week and goes with Him outside the camp, closing the veil.
The Church also leaves the first Chancel, the Chancel of Saints, and moves the Lectern to the second Chancel to pray away from the Altar, outside the Sanctuary and the camp, bearing His reproach and saying:
"Thine is the Power, the Glory, the Blessing and the Honor, forever Amen... "

With this hymn, we follow the Lord Jesus Christ in His passion, step by step, contemplating on every word we say to Him in His Passion.