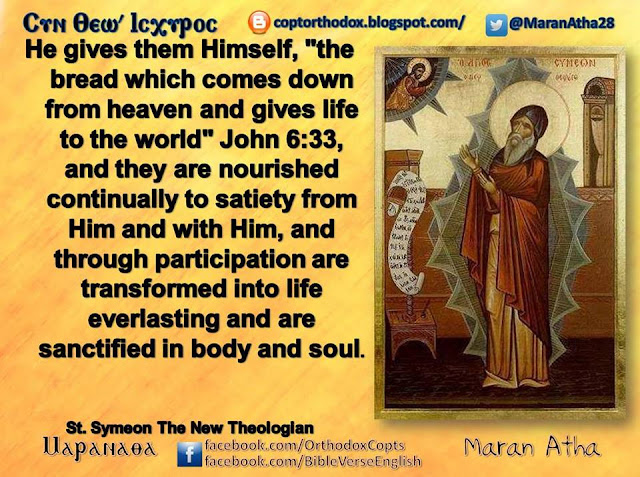 Just as a father who loves his children makes his sons dine with him but when he sees they are conducting themselves carelessly with regard to their lessons and distracting themselves with unprofitable matters, expels them from his table and orders his servants not to give them any food, in order to teach them not to be scornful and careless. So does our good Master and God dispose Himself for the sake of those who are His servant and by virtue of His grace and love for mankind, His sons.

He gives them Himself, "the bread which comes down from heaven and gives life to the world" (John 6:33), and they are nourished continually to satiety from Him and with Him, and through participation are transformed into life everlasting and are sanctified in body and soul. But when they neglect the commandments and by free exercise of their will, conduct themselves scornfully or slothful, and busy themselves with some worldly affair, inclining thus toward what is unsuitable and not proper to piety, then the Nourisher of all deprives them of Himself.

When they have come to an awareness of that good of which they have been deprived, have turned around immediately, sought it out continually, and not having found it, beat their breasts, weep and mourn for themselves, lay on themselves every kind of suffering, long for every sort of distress, trial and dishonor, in order that their loving Father might see their sorrows, their voluntary woe, and taking pity on them, turn about and give Himself to them once again. Which indeed He does.

So they are restored to their former condition and glory, with yet greater assurance and the same delight in the good things "which eye has not seen, nor ear heard, nor the heart of man conceived." (1Cor 2:9) They revere their Father more than before, and tremble before Him as Master, lest through inattentiveness they be implicated in the same evils as before and so be cast away from Him.