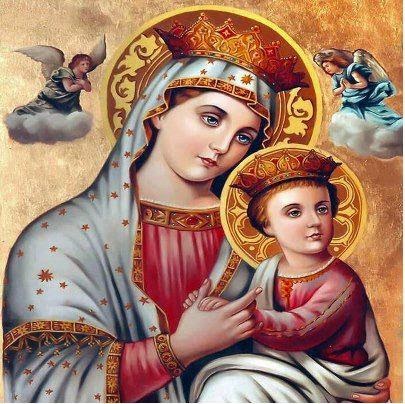 A. Surnames as regards her greatness
and her relation with God:

1. We give her the surname of The Queen who is by the right side of The King.

In this, we mention the words of the psalm "At your hand stands the queen in gold from Ophir" (Ps. 45:9). That is why, in her icon, she is portrayed at the right hand of the Christ our Lord. And we say about her in the divine mass "the Lady and the Queen of us all"......

2. Also we say about her: "Our mother the Holy Virgin".

When the Christ our Lord was on the Cross, He said about that to his disciple the beloved saint John: "Behold your mother" (John 19:27).

3. The Virgin is also compared to the ladder of Jacob"

That ladder which "was set up on the earth, and its top reached to heaven" (Gen. 28:12). That is the symbol of The Virgin who, by her giving birth to Christ, made the inhabitants of the earth reach to heaven.

4. She was also called "the bride"

because she is the true bride of the Lord of glory. The word of the Lord in the psalm was realized in her: "Listen, O daughter consider and incline your ear; forget your own people also, and your father's house; so the King will greatly desire your beauty; because He is your Lord, worship Him" (Ps. 45:10-11). That is why she was called the friend of Solomon, who is the virgin of the Song of Songs.

It was said of her in the same psalm: "The royal daughter is all glorious within the palace; her clothing is woven with gold. She shall be brought to the king in robes of many colors" (Ps. 45:13-14).

5. We also give her the surname "the beautiful pigeon"

in remembrance of the beautiful pigeon that carried to our father Noah a branch of olive tree, as a symbol of peace, bringing to him the good news of the deliverance from the waters of the flood......... (Gen. 8:11). With this surname, the priest burns incense in front of her icon when he goes out of the sanctuary and says: "Hail to you, O Virgin Mary, the beautiful pigeon".

6. The Virgin is also compared to the cloud

because of her height on the one hand, and because the prophecy of her coming to Egypt, compared her in this manner. It was mentioned about this in the book of the prophet Isaiah:
"The burden against Egypt. Behold, the Lord rides on a swift cloud, and will come into Egypt; the idols of Egypt will totter at His presence, and the heart of Egypt will melt in its midst" (Is. 19:1). The expression "cloud" is a symbol of the Lord who will come upon the clouds.
(Matt. 16:27).

B. Her surnames and symbols
as regards her motherhood to the Christ our Lord:


7. One of the surnames by which The Virgin has been described is "Theotokos"
that is: "the mother of God". This surname has been called upon her by the sacred œcumenical council of Ephesus in 431 AD. Saint Kirillos the Great insisted on that surname in his response to Nestorius......
Saint Elizabeth addressed her with that surname "the mother of my Lord" (Luke 1:43).

8. One of her surnames is also: "the golden censer".

We call her "Te shury" that is the censer in Coptic; and sometimes "the censer of Aaron".......... As for the fire which it contains inside her, coal in it symbolises the human nature of Christ, and fire symbolizes His divine nature, as it has been said in the Holy Bible: "our God is a consuming fire" (Heb. 12:29).

9. The Virgin is also surnamed "the second heaven"
because as heaven is the abode of God, so The Virgin Mary was an abode of God during the sacred pregnancy.

10. The Virgin is also surnamed "the city of God":

The prophecy in the psalm is realized in her: "Glorious things are spoken of you, O city of God" (Ps 87:3). Or what was said of her "the city of the great King", or certain prophecies which were said about Jerusalem, are realized in her..........or Zion as it was also said in the psalm: "And of Zion it will be said, "This one and that one were born in her; and the most High Himself shall establish her" (Ps. 87:5).

11. In this quality, she was surnamed "the vine where was found the cluster of life"

that is Christ. The Church asks for her intercession with that surname in the prayer of the third hour, saying to her: "O mother of God, you are the true vine who bears the cluster of life"........

12. By this quality of motherhood, she has other surnames of which we mention:
The mother of the true light, considering that it has been said of the Christ our Lord, that He is "the true Light which gives light to every man coming into the world" (John 1:9).
Likewise she was surnamed "the golden lamp" because she bears the Light. And also: "the mother of the Holy One", considering that the angel, when he announced her with the birth of Christ, said to her: "also, that Holy One who is to be born will be called the Son of God" (Luke 1:35).
"The mother of the Savior", because the Christ our Lord is the Savior of the world: "and you shall call His name Jesus, for He will save His people from their sins" (Matt. 1:21).

13. Among her symbols also: "the bush which the prophet Moses saw" (Exodus 3:2).
We say in the song: "The bush which the prophet Moses saw in the desert, is the symbol of the mother of Light, blessed be she. She has carried the fire of divinity in her womb, without being touched by any harm". It was said of the Lord that He is "a consuming fire" (Heb 12:29) to which the fire which is burning inside the bush, is a symbol, and the bush symbolizes The Virgin.

14. Also among her symbols: "the ark of the Testimony".
This ark was made of acacia wood that cannot be moth -eaten, and was covered with gold from inside and outside (Ex. 25:10, 22), as a symbol of the purity and the greatness of The Virgin. It also symbolized the things which were inside the ark that were a symbol of the Christ our Lord.

There was kept "the golden pot that had the manna, Aaron's rod that budded, and the tablets of the covenant" (as a symbol of the incarnated Word of God).

15. The Virgin is also compared to the pot of the manna;

because the manna was a symbol of the Christ our Lord, as being the live bread who came down from heaven, everybody who eats from him lives by Him, that is also the bread of life (John 6: 32,48,49). Since the Lord Christ is compared to the manna, so it is possible to compare the Virgin to the pot of the manna, who carried this celestial bread inside her.

16. The Virgin is also compared to the rod of Aaron which germinated:
that is: she miraculously sprouted and carried the buds of life, (Num.17:6 -8); although a rod has of course no life in it that can produce blossoms and yield fruit. This symbolizes the virginity of The Virgin who could not sprout or produce posterity; but she gave birth through a miracle. This description is mentioned in the hymn of Sunday.

17. The tabernacle of meeting (the dome of Moses).

The tabernacle of meeting was the place upon which The Lord used to come, and The Virgin is she upon whom The Lord came. God manifested his love for his people in the two cases. That is what we say in the book of the hymns (Al Ipsalmodia): "You have been compared, O Virgin Mary, to the tabernacle which Moses made on the mountain of Sinaï, where God was inside".

18. The Virgin is compared to the gate in the East.
That which the prophet Ezechiel saw, and of which the Lord said: "This gate shall be shut, it shall not be opened, and no man shall enter by it, because the Lord God of Israel has entered by it; therefore it shall be shut" (Ez. 44: 1 -2). The prophet saw the glory of the Lord at this gate which is in the East, and the house was filled with it (Ez. 43: 2,4,5).

That symbolizes the virginity of the Virgin who was from the countries of the East; and how this virginity remained sealed. Because she was that gate from the East, she was qualified as:

It was said about our Lady the Virgin in the book of Ezechiel: "As for the prince, because he is the prince, he may sit in it to eat bread before the Lord; he shall enter by way of the vestibule of the gateway, and go out the same way" (Ez. 44:3).

It is not astonishing that we surname the Virgin "the gate", because the Church also was surnamed "the gate". Our father Jacob said about Bethel: "How awesome is this place! This is none other than the house of God, and this is the gate of heaven!" (Gen. 28:17).

20. She was compared to the "Holiest of all"

That in which the chief priest entered once a year, to make atonement for all the people. The Lord of glory came once inside the Virgin Mary for the redemption of all the world.


Please refer to these related links: