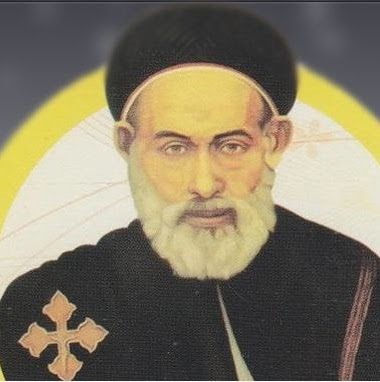 Anba Abraam, Bishop of El-fayyoum and El-Giza, departed in the year 1630 A.M. (June 10, 1914 A.D) His name was Paul (Boulos), was born in 1545 A.M. (1829 A.D) in the Estate of "Gilda", district of Mallawi, governate of Miniah, to righteous parents. They brought him up in a Christian manner. They sent him to the church school, where he learned religious subjects and church hymns. As he was a very bright student, Anba Yousab, the Bishop of Sunabbo ordained him a deacon for the church of Gilda. His heart longed for the monastic life, so he went to El-Muharrak monastery where he was ordained a monk by the name of Paul Gabriel El-Muharraki. He was nineteen years old.

He was meek, humble, had a pure life, and he prayed much in seclusion. Accordingly, the monks loved him exceedingly. When Anba Yakoubos, bishop of El-Meniah, heard of him, he summoned him. He retained him in the episcopate for a period of time during which he promoted him to a priest. When he returned to his monastery, the monks with a consensus decided to make him the abbot over the monastery after the death of their Abbot. He was then promoted to archpriest (hegumen) in the days of Abba Demitrius the second (111th Patriarch).  He remained Abbot of the monastery for five years, during which the monastery was the refuge for thousands of the poor. So he was called the father of the poor and the destitute.

During his time as abbot, he did not spare an effort to improve the condition of the monastery spiritually and physically. He improved its finances by developing its agricultural land. As he increased his charity toward the poor, the orphans and the widows, some of the monks became more resentful of him, for they considered these charitable works as squandering and extravagant acts. They complained against him to Anba Morcos, Metropolitan of El-Behira, who was the acting Patriarch after the death of Pope Demitrius. Anba Morcos accepted their complaints and deposed him as the abbot of their monastery. Shortly after his dismissal, he left El-Muharrak monastery and went to the monastery of El-Baramous. Several monks from the El-Muharrak monastery went to the monastery of El-Baramous, with archpriest Bolous (Abba Abraam), because they did not like the attitudes of the complaining monks. He stayed there for some time studying the Bible and teaching the monks.

The abbot of the monastery of El-Baramous at that time was archpriest Youhanna the Scribe, who became later on. In the year 1597 A.M. (1881 A.D.), Pope Kyrillos the Fifth chose and ordained him a bishop for the parish of El-Fayyoum and El-Giza. He replaced its reposed bishop, Anba Eisak, and was ordained with the name of Abba Abraam.

During his episcopate, he became famous for two attributes:

The First: His charity to the multitude of poor that came to the bishopric residence. He gave them all what he had of money. He made the bishopric residence a shelter for many of them. He offered clothing for those who had no clothes and food for those who were hungry. He never allowed anyone to offer him food that was better than that offered to the poor. Once he went down to visit the poor while they were eating, and found that the food he was offered that day was better than that offered to them. He became very sad, and immediately relieved the nun supervising the feeding service of the poor from her duties.

The Second: He was famous for his prayer of faith. Many miracles were performed, through his prayers, on his hands. His fame was spread to all parts of Egypt and also to some parts of Europe. Many patients, of different religions, came to him, seeking the blessing of his prayers and were healed. Anba Abraam was well read of the holy books. He always gave to his visitors advice, instructions and sermons which showed the great depth of his knowledge. More important was that he possessed a pure nature and many virtues. Particularly, his severe denial of himself, and his true renouncement of the pleasures of life and its vain glory. His food and clothing were just bare necessities. His ambition never looked up to the glory of higher ranks or positions. When the Patriarch wanted to promote him to the rank of metropolitan he apologized saying that the Holy Bible did not mention any ranks in the priesthood except the ranks of the priest and the bishop.

He was also straightforward in revealing his own opinion, looking only for the truth. He never gave any attention to the rank and greatness of people in higher places, for their greatness was far less than the greatness of the truth. For this reason, all the metropolitans and bishops of the church avoided his anger and sought to please him.

More than ten thousand Christian and Moslems walked in his funeral precession. His pure body was laid in the tomb, which was prepared for him in the monastery of the Virgin Mary in El-Ezab. Many miracles were manifested through him after his departure, and his tomb became and still is a pilgrimage for many who have special needs or infirmities.

May his prayers be with us and Glory be to God forever. Amen.