The Cross in Christianity 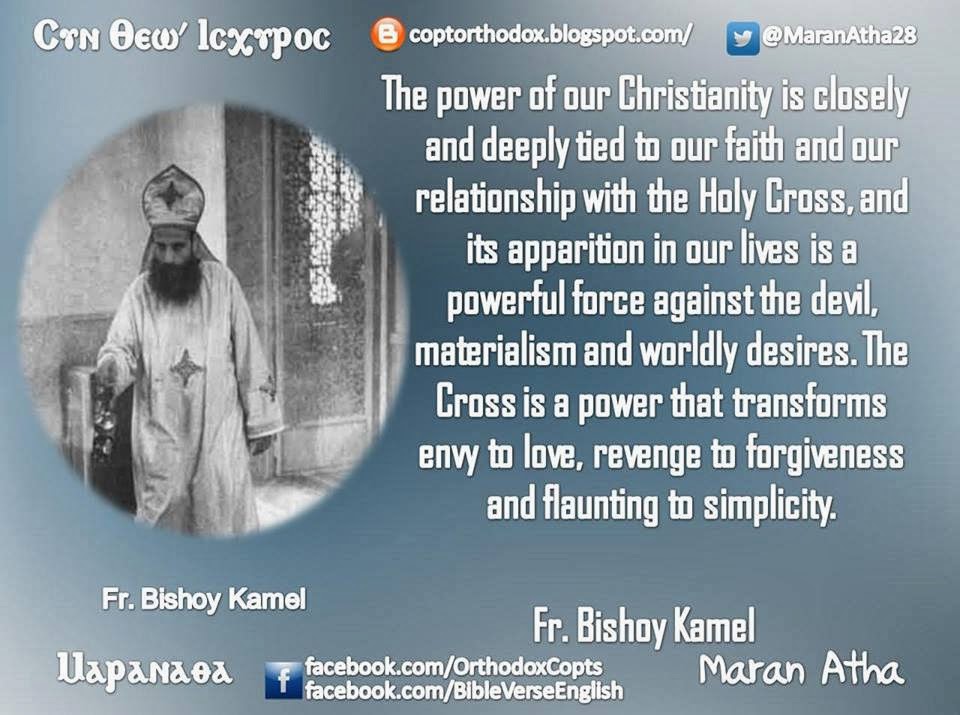 The Cross has weak appearance to the uninformed, but to the Christian, it is a weapon to overcome our worldly desires, and threats. With it we defeat Satan. “The message of the cross is foolishness to those who are perishing, but to us who are being saved it is the power of God.” (1Cor 1:18). Our teacher St Paul tells us: “Because the foolishness of God is wiser than men, and the weakness of God is stronger than men.” (1Cor 1:25)

Let us look at different ways in which the Cross has revealed its power and wisdom:

1. If the Christian faith had spread by the power of weapons or human wisdom it would have been a weak man-made faith. But because it spread with the greatest weapon that is hated by the Jews and Greeks; the weapon that has the appearance of foolishness and weakness, that is the cross.

Therefore our faith became Godly and divine, through the power of our Lord and not of humans, as St Paul said: “And I, brethren, when I came to you, did not come with excellence of speech or of wisdom declaring to you the testimony of God. For I determined not to know anything among you except Jesus Christ and Him crucified. I was with you in weakness, in fear, and in much trembling. And my speech and my preaching were not with persuasive words of human wisdom, but in demonstration of the Spirit and of power.” (1Cor 2:1-4)
2. The Cross was the strength of the Apostles while they preached:
When Jesus sent the disciples to preach He said to them: “Go your way; behold, I send you out as lambs among wolves. Carry neither money bag, knapsack (food), nor sandals.” (Luke 10:3-4). This is how Christianity spread. Christ asked them not to worry about food, or money or weapons for defence, because the power of the Cross accompanied them and that is more powerful than any worldly weapon.

Compare that with the amount of money and resources now spent in the Western world to spread different religions, printing books, radio broadcasts, university courses to learn the art of preaching. This reflection helps us realize the divine power that accompanied the disciples during their missionary trips.
3. The Cross is a condition to follow Christ:
The Lord said: “If anyone desires to come after Me, let him deny himself, and take up his cross daily, and follow Me”. (Luke 9:23). Whoever desires to be Christian, he must endure pain and sacrifice much for the sake of Christ. But he who does not, will receive many earthly delights and rewards.

Therefore Christians are Cross-bearers. They chose the narrow way (the only way) to enter the Kingdom of heaven to receive Heavenly rewards. If the Cross was not powerful, then how can people leave their worldly pleasures, desires and ranks and follow Christ?
4. The Disciples of Christ were Jews:
Most of the Disciples of Christ, as well as St Paul the Apostle, were Jews like Christ. It is well known that Jews reject the Cross. So what attracted the disciples to the Cross? If the Cross was not powerful, then how did the disciples believe in it? How did they preach about it to the Jews and Greeks? “But we preach Christ crucified, to the Jews a stumbling block and to the Greeks foolishness.” (1Cor 1:23)
The apostles preached about the Holy Cross, so they became weak and ignorant in the eyes of people. They had no weapons, they were Jews, they faced so many threats and persecutions. They carried the cross in their lives. They were all martyred, except for St John. Their pure blood became the seed of faith for the rest of the world, through the power of the Lord of the Cross.
5. The Church is always in a state of joy:
Although the Christian is always carrying his cross, he is always in a state of internal joy that is indescribable. St Paul used to sing and praise God in jail after he was beaten.
We cannot forget the story about the governor who asked the Christians to carry Crosses that weighed 5 tones (it was so heavy to the point of bruising, therefore Christians were labeled ‘blue bones’). At night, this governor pried into a Christian house through a hole in the door. He found this specific Christian doing chores whilst carrying the 5 tone Cross on his back. The governor asked him as to why he does that inside his house, where that was not required. The Christian simply answered: “the power and joy that this Cross gives me fills my life, so I do not want it to stop, that is why I continuously carry it.”
6. St. John Chrysostom said:
The Cross is a powerful weapon
The Cross is a weapon for preaching
The Cross is the basis for following Christ
The church without a Cross, is like a bride without a groom
If you are asked by anyone whether you believe in the Church of the Cross and you say yes. If he then mocks you, you should cry for him, because he still does not know that Christ was crucified for his sake.

My brethren, I offer you advice for this era and all times:

The power of our Christianity is closely and deeply tied to our faith and our relationship with the Holy Cross, and its apparition in our lives is a powerful force against the devil, materialism and worldly desires. The Cross is a power that transforms envy to love, revenge to forgiveness and flaunting to simplicity. The Cross then fills you with joy, so we pray with St Paul: “ But God forbid that I should boast except in the cross of our Lord Jesus Christ, by whom the world has been crucified to me, and I to the world.” (Galatians 6:14)

May the blessings of the Holy Cross be with us all.  Amen.