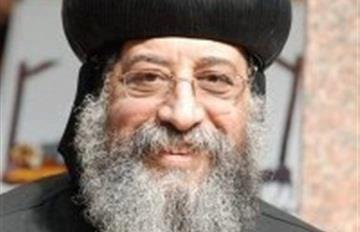 EGYPT'S ancient Coptic Christian church chose a new pope in an elaborate Sunday ceremony meant to invoke the will of God, in which a blindfolded boy drew the name of the next patriarch from a crystal chalice.

Bishop Tawadros, 59, an aide to the acting pope, was selected to become Pope Tawadros II, replacing the charismatic Pope Shenouda III who died earlier this year after 40 years at the helm of the church.

All three senior clerics whose names were in the chalice were considered consensus candidates who stayed out of disputes both within the church and with other groups. Tawadros will assume the papacy as Egypt's Christians, estimated to make up 10 percent of the country's 83 million people, fear for their future amid the rise of Islamists to power in the wake of the 2011 ouster of longtime authoritarian leader Hosni Mubarak.

The death of Pope Shenouda III at age the of 88 this year heightened the sense of insecurity felt by many who had known him as patriarch for all or most of their lives.


At the televised ceremony held in the Coptic Cathedral in Cairo, acting Pope Pachomios laid the three names in clear balls inside a chalice before starting Mass. There was a moment of silence before the drawing by the blindfolded boy, an act believed to reflect God's will in the choice.

"We will pray that God will choose the good shepherd," Pachomios told the packed cathedral as he sealed the chalice with red wax before laying it on the altar during Mass.

The process of electing a new pope began weeks ago, when a committee from the church narrowed the list of potential candidates from 17 down to five monks and bishops. On Monday, about 2,400 clergymen and church notables drew up a short list of three that also included Bishop Raphael, 54, once an aide to the late Pope Shenouda, and Father Raphael Ava Mina, the oldest among them at 70, a monk in a monastery near Alexandria and a student of the pope who preceded Shenouda.

In addition to having stayed out of disputes with other groups, including Islamists, the bishops were chosen only from those without a diocese to avoid any risk of favouritism.

The papal election comes during a shift in Christian attitudes toward their relation to the state. For years, Christians largely relied on the church to secure protection for their rights, using Shenouda's close relationship with Mubarak.

But Shenouda had longstanding critics within the community who asked why a cleric should act as an intermediary between them and the state. Following the uprising and the pope's death, more Copts have been emboldened to act outside the church to independently demand rights, better representation and freedom of worship.

None of the candidates attended the ceremony, and are instead praying in their respective monasteries. The state's MENA news agency says church leaders will head to Tawadros's retreat in the monastery complex of Wadi Natrun northeast of Cairo to congratulate him.

Pope Tawadros II faces tremendous challenges as the country's transition to democracy is marred by a deep rift between increasingly politically powerful Islamist groups, from which the country's new president hails, and the liberal and secularist groups who were initially behind the revolt that ousted Mubarak last year.

At the center of the political squabbling in Egypt is the role of Islam in the country's new constitution, currently being drafted. The Christians, along with liberal and secularists, oppose demands by Islamists to increase the role of Islamic Shariah law.

Egypt's Coptic Christians have long complained of discrimination by the state and the country's Muslim majority. Clashes with Muslims have occasionally broken out, often sparked by church construction, land disputes or Muslim-Christian love affairs.

The prospects of a stronger role for Islamic law in legislation increase the community's concern of further marginalisation, or of curtailing of their rights of worship and expression.

Late Saturday, Pachomios said during a popular TV program on the private station al-Nahar that Christians have never held senior state posts or leading positions such as university deans in Egypt's modern history. He also insisted there will be no clause in the constitution allowing state monitoring of the church's finances, a demand often made by Islamists.