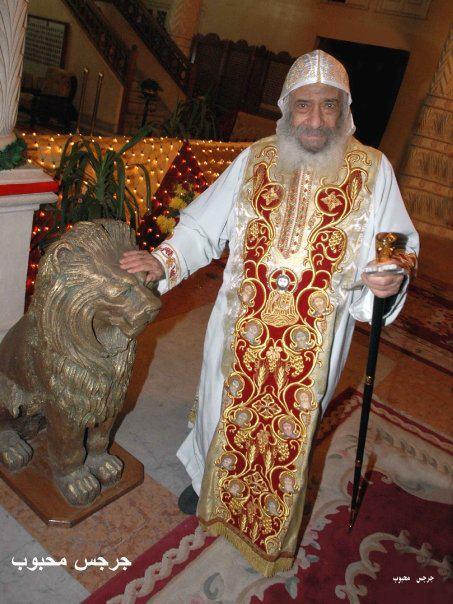 6 - HE WAS FAST ASLEEP
By H.H. Pope Shenouda III

He was fast asleep when the angel whispered in his ears, 'Till when will you live thus, a mere shadow of another person who dominates own you as he wills?' The voice was lenient and sincere, so the sleeping person was not disturbed by it but replied calmly, 'What do you mean, my master the angel?' The angel replied, 'I mean that you have lost your personality with regard to your thoughts and your spiritual life.. and now you have the personality of another person.  That person exalted himself and became exalted in your eyes to the extent that you took him for an example.  You began to follow his steps in everything; if he is elevated, you are elevated also and if he falls, you fall with him.  You adopt his views and follow his deviations.  Moreover, you defend his views more than he himself .  You take his principles as incontestable; suffice you that the person whom you worship has uttered them once.'

The person who was sleeping felt that all the words said by the angel were true but he tried to justify himself and said: 'Is there any harm, my master the angel, if I follow him as long as his views are sound and faultless?' The angel answered him, 'How do you know that all his views are sound?  Do you think that your master is infallible?  Is it not possible to find that he is at fault, being a human being?  And if he is wrong, how would  you know since you listen only to his views and accept nothing else?  You even refuse to listen to any person who may oppose the ideas of this (master); and if you do listen, it is with the spirit of argument.  You try to criticize and refute any idea without understanding it just because it contradicts your master's views!!'

Here, the sleeping person rubbed his eyes bashfully to realize whether he was awake or asleep while the angel went on, 'Your spirit is imprisoned; it wants to be set free but is not able to because it is tied up with the fetters of that person... He gives you only the knowledge he wants you to learn and reveals to you whatever facts he wants.  Even your own knowledge which you acquire from other sources must be reviewed by him.. You have completely lost your personality and behave no more by yourself.  Whenever you face a problem, you seek his help; and whenever anything befalls you, you do not try to find a solution for it but wait till your master comes and solves it.  Even if you take a decision concerning such a matter, he may cancel your decision in any way and whenever he wants without any objection on your side.  The utmost thing you can attain in your life is to be a faded image of that person.  You have lost the personality which God gave you when He created you.. and at the same time you cannot adopt his personality fully because the spiritual, mental and social circumstances which formed your personality differ from those which formed his. I imagine you rocking unsteadily between both ways.'

The sleeping person listened to all this speech feeling that it had touched his heart.  He even felt within himself that he had become weary of the authority of that (master).

This gave him the courage to ask the angel to find him a solution; he said, 'Oh my master the angel, how dare I argue with my master?' The angel replied, 'I tell you, though the case is different, that God likes His children to be of strong personality and He even allows them to discuss with Him.  Remember how Jeremiah addressed God saying, "Righteous are You, O Lord, when I plead with You; yet let me talk with You about Your judgments.  Why does the way of the wicked prosper?  Why are those happy who deal so treacherously?  (Jer. 12:1)... Listen also to Abraham arguing with God - glory be to His name-says, "Far be it from You to do such a thing as this... Shall not the Judge of all the earth do right?" (Gen.18:25).  Moses also spoke to his creator in the same manner; he said, "Turn from Your fierce wrath, and relent from this harm to Your people.." (Ex. 32:12).

Here, the sleeping person asked the angel, 'Now, my master the angel, what do you want me to do?  'The angel replied, 'Do not be under the control of a certain person.  Listen to many, and read the writings of many, consider whatever views you want but have a discerning spirit which can distinguish between a sound opinion and a wrong one.  Adopt only what conforms with your spiritual and mental nature, and what fits your social and practical circumstances and your age also.  Know that there are various paths that lead to God but perhaps the path which fits the others does not fit you in particular.. Yours is the path which the Lord has chosen for You - in particular - not any other path.'

At this point the sleeping person got up of his sleep to find himself a new person having his spirit released and set free from any bonds, seeking truth wherever it is and giving no worship to a human being..

Email ThisBlogThis!Share to TwitterShare to FacebookShare to Pinterest
Labels: Be In Control, Distinguished Spirit, H.H. Pope Shenouda III, He Was Fast Asleep, Imprisoned Spirit, Loss Of Personality, Lost Yourself, Paths Lead To God, The Release of The Spirit