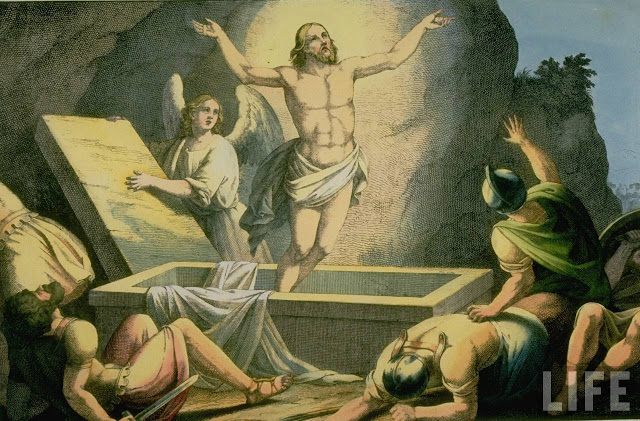 Easter celebrates Jesus' resurrection. His cruel death by crucifixion took place at the same time as the Jewish holy celebration of Passover. What they had been symbolizing for over 1000 year with the killing of sacrificial lambs and the passover supper was now happening to the lamb of God.
On that very day and at that very hour when people throughout the land were selecting and slaughtering passover lambs, Jesus was crucified.

"He was led as a lamb to the slaughter, and as a sheep before its shearers is silent, so He opened not His mouth." (Isaiah 53:7)


When Jesus stood trial for His life before the governor, Pontius Pilate, Jesus didn't speak in His own defense.  (Matthew 27:12-14)


About 1,000 years before crucifixion became a usual means of execution in the Roman Empire, King David wrote of the Messiah:
"All my bones are out of joint …. They pierced My hands and My feet" (Psalm 22: 14,16)
In death by crucifixion, the weight of the victim's body pulls his arms out of their sockets. Most of the condemned were tied to their crosses, but Jesus was nailed to His -- Through the hands and feet.


It was also customary for the Romans to break the legs of those who had been hanging on their crosses for hours but hadn't died yet. The lack of support for the body caused the windpipe and lungs to collapse, and hastened their deaths. But when the Roman executioners came to do this to Jesus, they found that He was already dead.


Thus another Bible prophecy was fulfilled:
"(God) guards all his bones; Not one of them is broken. (Psalm 34:20)


Instead, just to make sure Jesus was dead, one of the Romans thrust a spear into Jesus' side, piercing His heart. "And immediately blood and water came out"  (John 19:34)
This fulfilled the scripture, "I am poured out like water … My heart has melted within Me" (Psalm 22:14)


One would expect blood to flow from a spear wound, but not water. Where did that come from? Medical science has found that people who die in great anguish of heart often have an accumulation of water around the heart. Jesus died of a broken heart -- for you and me.


Jesus also died feeling like the lost sinner. He went through an experience that, thank God we will never have to go through--not just crucifixion, not just agony of body, but agony of mind and spirit, feeling that God had deserted Him. As He died, "Jesus cried out with a loud voice, saying, 'Eli, Eli, lama sabachthani?' that is, 'My God, My God, why have You forsaken Me?'"  (Matthew 27:46)


Did God answer Jesus on the cross?
There's no record of an answer. Jesus felt that God had deserted Him at that moment when He needed Him most.


Jesus suffered the spiritual agony of the dying sinner--lost, without salvation, without God, dying for his sins.  Only in Jesus' case He was dying for our sins, the sins of the whole world. He was willing to go through all that so we could be forgiven and have eternal life.
Such Love!
"And they made His grave with the wicked--But with the rich at His death" (Isaiah 53:9)
Jesus was unjustly condemned and crucified between two common criminals. (Matthew 27:38)
Yet after His death, a rich man who was among Jesus' followers, Joseph of Arimathea, laid Jesus' body in his own new tomb. (Matthew 27:57-60)


After Jesus' body was laid in the tomb, to make sure His disciples didn't steal His body and claim He had risen from the dead, the tomb was sealed and some Roman soldiers stood guard. (Matthew 27:62-66)


Three days later, Mary Magdalene and the other Mary came at dawn to the tomb, and an angel appeared and rolled the stone away.
When the Roman guards saw the angel, "they shook for fear of him, and became as dead men. "But the angel said to the women, "Do not be afraid. … Jesus is not here; for He is risen, as He said."
And the angel showed the women where Jesus' body had lain. (Matthew 28:1-8).


Jesus had risen from the dead!


Three days after His lifeless body was buried, something happened that shocked His enemies and proved to all of His followers that He really was the Son of God: He arose from the dead, the victor over death and Hell forever!


Come back to God!


All the love of the world from Our Lord!
Have faith, and know for sure that this Man of love, Jesus Christ, really is the Son of God, the way to salvation and eternal life! All you have to do is believe that Jesus died for you, and accept Him and His free gift of forgiveness for your sins.


You can receive Him and His salvation by simply and sincerely praying a prayer like the one which follows:


Dear Jesus, I believe that You died for me and arose from the grave. I need Your love to cleanse me from my mistakes and wrongdoing. I need Your light to drive away all darkness. I need Your peace to fill and satisfy my heart. I now open the door of my heart and I ask You, Jesus, to please come into my life and give me Your free gift of eternal life. Thank You for suffering for all of the wrong I have done, and for hearing my prayer and forgiving me, Amen.
(Copied)


Happy Easter To All.